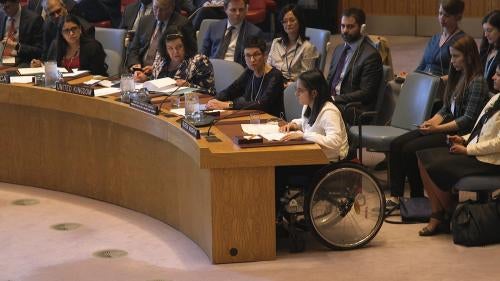 That’s how 20-year-old Nujeen Mustafa described the experience Wednesday of being the first person with a disability to brief the United Nations Security Council in New York.

In her address, Nujeen described what it was like in Syria when the bombs fell, her mother bringing her into the bathroom to hide and knowing their only escape was carrying her down five flights of stairs. “Every day, I feared that I could be the reason that my family was one or two seconds too late.”

During the briefing, I could see Nujeen’s hands shaking as she spoke, but she delivered her message with poise and conviction: “This should not be just another meeting where we make grand statements and then move on…you can and should do more to ensure that people with disabilities are included in all aspects of your work – we cannot wait any longer.”

“Not a single person around that horseshoe table was checking their phone while Nujeen was speaking,” one ambassador told me just after the briefing.

Security Council members thanked Nujeen for her courage and pledged that people with disabilities would no longer be invisible in the work of the council. Nujeen vowed to hold them to that promise.

It was a quite an effort to bring Nujeen to the United States: the US government twice rejected her visa application but accepted it on the third attempt thanks to the efforts of officials from the UK, France, Germany, and the US.

But it was worth it to help a person with a disability from a country in conflict share her experience with the world’s key decision-makers on peace and security, and make them take notice of the needs of people with disabilities. “This is not charity. This is our right,” she said.

After the briefing, as Nujeen and I took it all in outside the UN headquarters, I asked her how she felt. “Hopefully, I left an impression on members of the Security Council. But it’s not about me. It’s about the one billion people with disabilities who I tried to represent today. I hope the session will encourage the Security Council to take action to ensure that we live in a world where people with disabilities are no longer at a disadvantage just because we are different.”