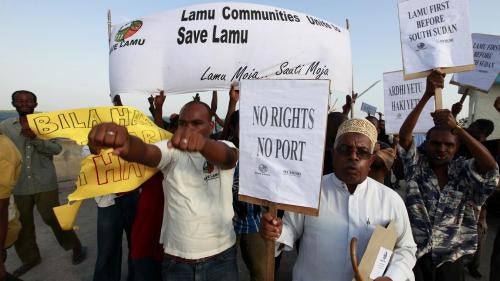 The 69-page report, “‘They Just Want to Silence Us’: Abuses Against Environmental Activists at Kenya’s Coast Region,” describes the context for activism around The Lamu Port-South Sudan-Ethiopia Transport corridor project (LAPSSET) and associated development projects, and documents the obstacles activists face in speaking out publicly about their concerns. At least 35 activists campaigning against the region’s mega infrastructure and transport projects have faced threats, beatings, arbitrary arrests, and detentions.

“Kenyan authorities should focus on addressing the environmental and health concerns relating to the LAPSSET development project instead of harassing the activists who raise the issues,” said Otsieno Namwaya, Africa researcher at Human Rights Watch. “Silencing activists isn’t going to resolve the concerns over whether the government plans are going to harm the environment and the people living there.”

The project, the largest infrastructure project in East and Central Africa, envisions a 32-berth seaport in Lamu, three international airports, road and railway network, three resort cities, and other associated projects such as the coal-fired power plant, which is cosponsored by two private companies, Amu Power and Centum Investment Company. LAPSSET Corridor Development Authority, a state agency carrying out the project, has donated over 975 acres (394 hectares) of land for the construction of the Lamu coal fired power plant.

In May and August 2018, Human Rights Watch documented incidents of harassment, intimidation, and other abuses against at least 35 activists over the past five years. In many cases, activists were arrested or detained in connection with their activism, then released without being charged. Security forces have broken up protests; restricted public meetings; and threatened, arrested, and prosecuted activists on various charges.

In at least 15 instances, police accused activists of having links or being sympathetic to Al-Shabab, a Somalia based militant Islamist group. This was especially common between 2013 and 2016, amid increased government surveillance and crackdowns on rights organizations and activists in regions with predominantly Muslim populations.

“The government brands activists who speak against the project as terrorists,” said a 32-year-old teacher at the forefront of organizing community meetings on the environmental effects of LAPSSET. “Police arrest, detain, and even interrogate activists in a bid to intimidate them.”

As the Kenyan government moves ahead with implementation of the Lamu Port project, communities on the coast and organizations supporting them have become increasingly vocal about the adverse health and environmental impacts of the projects. They have campaigned especially loudly against a planned coal-fired power plant, saying it will pollute the air and water, affecting the livelihoods of local communities.

The activists say that the plant will emit smoke that contains hazardous particulate matter, discharge waste effluents into the sea that could kill fish and other sea animals, and further emit coal dust that poses serious health risks, including cancer, to people who live nearby. They also worry the port construction is destroying mangrove forests and breeding grounds for fish and other marine animals. The activists have further expressed concerns over the government’s taking of farmland, with most of it yet to result in compensation, risks of water pollution from waste discharge, and climate change brought about by greenhouse gas emissions.

A 34-year-old activist advocating public participation in decision-making for the project said he was arrested in October 2015 in the village of Ndau, by about 10 Criminal Investigations officers. They took him to the sub-county commissioner’s office, where he was detained for a few hours. “Police then told me to stop opposing government projects because they were meant to benefit us,” he said.

Kenyan authorities should take concrete steps to uphold freedom of expression, assembly, and association, and to uphold international standards for ensuring human rights in the context of development, Human Rights Watch and the National Coalition of Human Rights Defenders-Kenya said.

“The government response to Lamu activists is a test case for Kenya to uphold and protect rights in the context of large-scale development projects,” said Kamau Ngugi, executive director at the National Coalition of Human Rights Defenders-Kenya. “Kenyan authorities have an obligation to respect the role of activists and to uphold the rights outlined in international treaties.”