(Beirut) – A local group working to uncover mass graves in the area of northeastern Syria once controlled by the Islamic State (also known as ISIS) needs international support and technical assistance to preserve evidence of possible crimes and identify the remains, Human Rights Watch said today.

With an unknown number of mass graves in the city of Raqqa and surrounding areas and thousands of bodies left to be recovered, local authorities affiliated with the Raqqa Civil Council are struggling to cope with the logistical challenges of collecting and organizing information about the bodies recovered and providing it to families searching for missing or dead relatives. Identifying missing people and preserving evidence for possible prosecutions will have implications for justice in Syria as a whole.

“Raqqa city has at least nine mass graves, each one estimated to have dozens, if not hundreds, of bodies, making exhumations a monumental task,” said Priyanka Motaparthy, acting emergencies director at Human Rights Watch. “Without the right technical assistance, these exhumations may not provide families with the answers they have been waiting for and could damage or destroy evidence crucial to future justice efforts.” 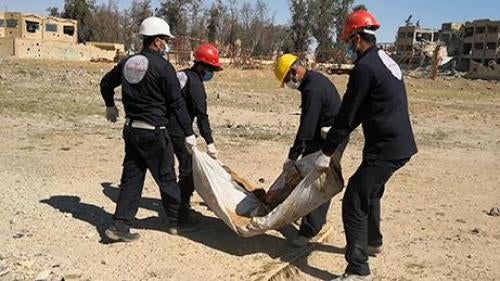 On June 12, 2018, the First Responders Team in Raqqa finished uncovering one mass grave containing 553 bodies and reburying them in a local graveyard after logging in their identifying information, and have begun work uncovering a second. The first grave, at al-Rashid playing field in Raqqa city, is the first of nine mass grave locations the team has identified, a team leader told Human Rights Watch. Human Rights Watch researchers visited the site in May. The team operates under the authority of the Raqqa Civil Council, a local governance unit created by the Syrian Democratic Council in April 2017.

ISIS detained thousands of people during its control of the area, from June 2014 to October 2017, when armed groups on the ground supported from the air by a US-led coalition retook the city. Relatives of some detainees who remain missing launched a campaign in late 2017, “Where are the kidnapped by ISIS?” to seek the coalition’s help in finding the fate and whereabouts of ISIS detainees. They have yet to receive a response. Local authorities estimate that thousands of others were killed during the battle to retake the city, many of whom were buried hastily, or whose bodies remain in the rubble.

Yasser al-Khamis, the head of the First Responders Team, told Human Rights Watch that the team believed, based on their observation of injuries and reports from family members who identified relatives’ remains, that the al-Rashid site contained a mix of airstrike victims and ISIS fighters, and that it may also have contained patients from a nearby hospital. Workers had identified women and children, as well as men, among the bodies, he said. Of the 106 bodies exhumed at the time of Human Rights Watch’s visit, the team had identified five that appeared to be ISIS fighters based on their clothing, and believed the rest to be civilians. Where possible, the team registered names of the deceased and any immediate family member who was able to identify them.

Human Rights Watch researchers observed the team logging basic details about the bodies found; for each body, a team member assigned the body a number and logged on a form the possible cause of death, injuries, sex, hair color and length, clothing, and approximate age, if it could be determined, as well as any items found on the body. They determined this information based on a visual assessment of the remains exhumed. They did not take photographs in accordance with international forensic standards, an important practice in working towards a more reliable record of the dead. Most team members were volunteers who do not have forensic expertise. The team’s forensic doctor had been a general practitioner before ISIS was driven from the area and had no prior experience or formal training in forensic analysis.

The team developed their protocol based on phone consultations with international organizations. But the lack of technical equipment and forensic expertise, combined with the fact that at least seven months had passed since initial burial, made the identification process inexact and subject to error.

Exhumations in Raqqa are further complicated by the presence of landmines. All the mass grave sites must be cleared of landmines planted by ISIS before the team can remove bodies, al-Khamis said. Human Rights Watch has previously documented the dangers civilians face from landmines planted in Raqqa and other parts of Syria and Iraq previously under ISIS control, including at other mass grave sites.

The recovery and analysis of skeletal remains from mass graves is a complex process that requires expertise in gathering information about missing persons, ability to conduct excavations, and skills in identifying the bodies and determining the cause of death. When the case involves violations of human rights and international humanitarian law, exhumations without forensic experts can destroy critical evidence and greatly complicate the identification of bodies.

Families of those who disappeared or died during the Raqqa battle also lack a centralized body or office where they can provide information about missing relatives or go to receive information about them, Human Rights Watch found. Some have come to the site of the mass grave, but many families are no longer living in the area. Even for those in the area, the team lacks capacity to systematically respond to queries.

Representatives of the Raqqa Civilian Council told Human Rights Watch that the local intelligence services were responsible for receiving and providing information about missing or disappeared persons to families, but the intelligence services do not make themselves readily available to civilian meeting requests. In some cases, civilians are not aware that they are the responsible entity.

Local authorities should designate a centralized civilian authority where families can collect or provide information on missing persons, and explore ways to communicate with families living in areas outside their control. Authorities should also create a digital database, including photographs in accordance with basic forensic standards, for those exhumed from mass grave sites.

Members of the international community now providing recovery and stabilization support, most prominently the United States, should support local authorities in developing and maintaining a more precise system for storing information on missing persons and identifying exhumed remains. While the US is providing funding to the Raqqa Civil Council and the team, the amounts are not public knowledge and the team noted that its work was temporarily affected by the March 2018 freeze of $200 million in US government stabilization funds for Syria. It was clear to Human Rights Watch that the team needs far more training and technical assistance in order to exhume the bodies and collect data without losing information crucial to identifying them.

International organizations with forensic expertise should provide technical support, including by sending in forensic experts to support the identification and exhumation processes, and local authorities should facilitate the process to the extent possible.

If workers continue to exhume the graves without adequate technical training, equipment, and support, families may lose the opportunity to accurately identify the remains of their loved ones. Evidence regarding crimes in the area, including ISIS crimes, may be lost.

“Families of those killed by ISIS deserve to know the fate of their loved ones and to have access to justice for those crimes, and preserving evidence from these mass graves is a key part of that,” Motaparthy said. “Local groups are doing what they can, but they need support to carry out their difficult and dangerous work in a way that fully supports families’ right to accurate information about those killed.”