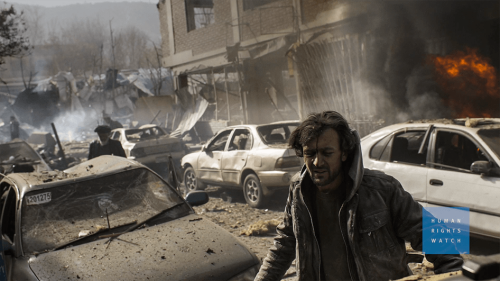 (New York) – Increased insurgent attacks on civilians in Afghanistan have left victims’ families and survivors in dire need of financial, medical, and psychosocial support, Human Rights Watch said in a report released today. The Afghan government should ensure programs to assist victims of attacks by the Taliban and Islamic State-linked armed groups reach those in need.

“Insurgents who detonate bombs in mosques or at busy intersections with the intent of inflicting maximum civilian casualties are committing war crimes,” said Patricia Gossman, senior Afghanistan researcher at Human Rights Watch and author of the report. “Victims’ families and survivors may lose livelihoods and suffer harms that persist long after the attack. But Afghan government efforts to help these families has fallen short.”

Insurgent Attacks on Civilians in Afghanistan

The 49-page report, “‘No Safe Place’: Insurgent Attacks on Civilians in Afghanistan,” documents attacks since 2016 by the Taliban and groups affiliated with the Islamic State of Khorasan Province (ISKP), an affiliate of the Islamic State. While the Taliban claim they do not target civilians, the report documents indiscriminate attacks by the Taliban that have killed and injured thousands. ISKP-linked groups have targeted civilian facilities in urban areas of Afghanistan, including many Shia mosques. The report, based on interviews with 45 civilian victims of insurgent attacks and their relatives, highlights the lasting consequences of the attacks on affected families and communities.

Since early 2016, insurgent groups in Afghanistan have sharply escalated their attacks in Kabul and other major urban areas, killing and injuring thousands of civilians. In interviews with Human Rights Watch, relatives of people killed in insurgent attacks described the cascading negative consequences for victims’ families: the devastating financial impact for those who have lost a breadwinner; the social consequences, especially for women who are suddenly widowed, becoming dependent on other members of their husband’s family for support and limited in where they can live and work; and the impact on children who have had to leave school, either because their family can no longer afford the cost or because the child must work in order to supplement the family’s income. Each death has a ripple effect on the family network, with spouses, children, parents, and other relatives suffering losses in support, emotional and social security, and income.

Many of those Human Rights Watch interviewed also described serious emotional and psychological trauma as a result of witnessing and surviving such attacks. The escalation in insurgent attacks in the past two years, bringing increased insecurity, uncertainty, violence, and economic hardship, has exacerbated trauma and psychological distress.

The Afghan government offers some financial assistance to those injured and to the families of those killed in insurgent attacks. However, many of those we interviewed said they had received no government assistance despite promises that such aid was forthcoming. Others said that the process for obtaining assistance was prohibitively onerous, or was tainted by corruption, with some receiving assistance and others not.

Human Rights Watch called on the Taliban and other insurgent groups to cease all intentional attacks on civilians and civilian objects – including schools, hospitals, places of worship, and homes not being used for military purposes. They should also cease all attacks that fail to discriminate between civilians and combatants, or that could be expected to cause disproportionate harm to civilians, as well as perfidious attacks, such as using an ambulance to conceal bombs. Insurgent commanders who order or are otherwise responsible for serious laws of war violations should be held to account.

The Afghan government has the responsibility under international law to protect the lives of all those under its jurisdiction and to bring those who commit serious international crimes to justice. It should also formalize through regulation or legislation the current ad hoc system or create a new program for providing assistance to civilian victims of the conflict, including those injured or those who have lost a family member from insurgent attacks.

The government should launch a campaign to inform the general public about the procedure for obtaining financial assistance or other support. Support should be equitably distributed, and complaints of corruption and discrimination should be promptly investigated. The government should also develop and implement measures to provide psychosocial support to survivors of attacks, whether by insurgents or government and allied forces.

Afghanistan’s international donors should support programs to provide financial and other assistance, including psychosocial services, to civilian victims of attacks by all parties to the conflict.

“Victims of insurgent attacks are more than statistics – they are Afghans who deserve to be treated with dignity and have access to the services they need,” Gossman said. “The Afghan government and its international donors should step up to support them.”

I found myself under dust, furniture, and window glass. It was hard to breathe or stand.… My body, clothes, and even my shoes were full of blood and I could hardly walk. I saw a colleague’s body, furniture, glass all around. I realized I was walking toward an inferno.
–Hashim (pseudonym), who was injured in the May 31, 2017 truck bomb attack in central Kabul

I heard a loud sound – everything went dark and I fell. Then I felt like my leg was on fire. A relative of mine heard me screaming.… When I woke up I discovered they had amputated my leg below the knee.… I can’t work anymore, and I have financial problems.… It is a very bad situation.
–Sardar M., a plumber, who was injured in the March 1, 2017 attack by the Taliban on a police station in Kabul

We have lost the head of our family.… We are helpless. My children can’t go to school now, I can’t afford their fees.
–Sugra Hussein, whose husband was killed in the October 20, 2017 ISKP attack on the Imam Zaman Mosque in Kabul

I was taking glass out of my feet for many days after. No one should see such a day! I was treated at the hospital and went home, but I am not well. My husband has been ill for some time, so I must work, but I cannot now. I need psychological help.
–Sima, who was injured in the August 1, 2017 ISKP attack on the Jawadiya Mosque in Herat

It was really hard for my family as I am the only breadwinner. I still have shrapnel in my back. My stomach had 30 sutures and I still feel pain. I can’t do heavy work at my shop, so I had to hire an assistant. There is no safe place in Kabul – you don’t know where the next attack will be.
–Mohammad A., shopkeeper who survived the July 27, 2017 Taliban attack on a government employee shuttle bus in Kabul