Donate Now
Last month, I sat down with Monica, a 30-year-old polio survivor in Bambari, a war-torn town in the Central African Republic. She was living in a displacement camp after intense fighting forced her to flee the town of Bakala, 110 kilometers away. “I went into the house to hide,” she said, describing the Bakala violence. “My husband told me to stay there and he left with the kids to hide outside. They were chased into the bush and killed.”

In the camp, Monica – who can’t walk – is alone and struggles to find food. She is haunted by the memory of her husband and three children, ages 2, 3 and 4. “I have lost everything,” she said. “These men who kill us…they treat us as if our lives are worth nothing. Will they ever know what they have done?”

Violence in the Central African Republic has fallen from the world’s radar, but that does not mean the killings have let up. Over a dozen armed groups now roam the country committing a range of abuses. Violence is on the rise in the eastern provinces and impunity still reigns. 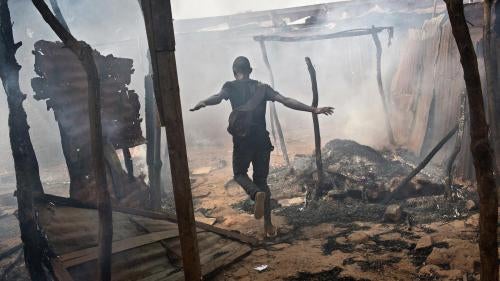 A comprehensive new report by the UN, released this week, makes the extent of the devastation abundantly clear. It should draw urgently needed attention to this bloody crisis and spur action to help it end.

The 369-page “Mapping Report” documents serious violations of human rights and international humanitarian law from 2003 to 2015, and in the Central African Republic the task was immense. An eight-member team conducted field investigations and combed through 1,200 documents. They cover 620 crimes “of the most serious gravity” committed by various parties, including village burnings, killings and rape.

The report establishes a timeline for the violence from the rule of former President François Bozizé up to when the Seleka armed group that overthrew Bozizé fractured into different armed bands. But the report is not just an exercise for the historical record. It was written with an eye towards ensuring justice for the crimes it documents: a roadmap for prosecutors to hold those responsible for serious crimes to account.

On the international level, the International Criminal Court (ICC) opened investigations in September 2014 and this document will facilitate its work. However, the ICC will most likely only target a handful of suspects.

The task of dealing with many of the other crimes falls to the Special Criminal Court (SCC), a unique judicial body established in the Central African Republic in 2015. With national and international judges and prosecutors, the court has a mandate to investigate and prosecute grave human rights violations in the country since 2003. Together with the ICC, the SCC offers a meaningful opportunity to break the cycles of impunity that have plagued the country for years.

The special court, the government and the United Nations now effectively have a roadmap for action. The mapping report does not establish individual criminal responsibility, but it highlights many of the most serious crimes and priority areas for investigations. The critical next step is ensuring that the court gets the full funding that it needs and becomes operational as soon as possible. This includes working to protect witnesses and to secure court personnel.

The government has taken important steps in recent months, including the appointments of a chief prosecutor and other senior personnel, but it can do more to get the court up and running, such as appointing a point-person in the president’s office.

Governments have pledged only USD$5.2 million of a needed $7 million for the first 14 months of the court. Donors and the UN should back the court over the long term, including technical and logistical support. And they should ensure that amnesty for grave crimes is not part of any peace deals negotiated by the UN or others.

Warlords and commanders need to be held accountable for the killings and people like Monica should know their lives, and the lives of their families, are worth something. The next report they see should be a progress report on justice.

Lewis Mudge is a researcher in the Africa Division at Human Rights Watch focusing on the Central African Republic since 2013.