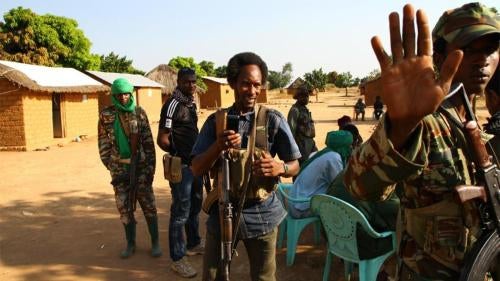 On March 30, 2016 former Central African Republic Prime Minister Faustin-Archange Touadéra was sworn in as president after more than two years of an interim government. Despite the rare peaceful transition of power and relatively peaceful elections, the country remained insecure, unstable and beset by serious human rights violations.

Sectarian violence and attacks on civilians continued in central and western regions of the country, most notably in the Ouaka, Nana-Grébizi, and Ouham-Pendé provinces where predominantly Muslim Seleka rebel groups, largely Christian and animist anti-balaka militias and other armed groups remained active. Civilians continued to bear the brunt of the fighting and armed groups raped and sexually assaulted women and girls. An estimated 467,800 people, the majority of them Muslim, remained refugees in neighboring countries and a further 384,300 remained internally displaced.

The United Nations peacekeeping mission, MINUSCA, deployed about 10,050 peacekeepers and 2,000 police across many parts of the country during the year, but struggled to establish security in key areas and to sufficiently protect civilians. MINUSCA’s efforts were marred by allegations of sexual exploitation and abuse by peacekeepers of civilians, including children. Credible accusations that African Union (AU) peacekeepers murdered 12 civilians in Boali in 2014 gained further strength when a mass grave was exhumed in the town in February.

Impunity for past abuses and war crimes remained pervasive. Progress toward the functioning of a Special Criminal Court in the national justice system has been slow. The International Criminal Court (ICC) prosecutor continued investigations, started in September 2014, into alleged war crimes and crimes against humanity committed in the country since August 2012. 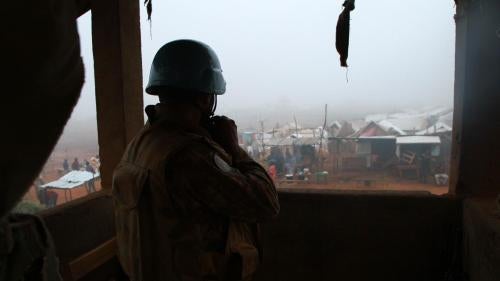 The Seleka, a predominantly Muslim rebellion made up of loosely affiliated factions, continued to attack civilians, killing scores, often under the pretext of protecting themselves from the anti-balaka. In September, fighters from the Union for Peace in the Central African Republic (l'Union pour la Paix en Centrafrique), a Seleka faction, attacked villages on the road between Kouango and Bianga, in Ouaka province.

In October, Seleka forces attacked and burned a displacement camp in Kaga-Bandoro, killing at least 37 civilians, despite the presence of UN peacekeepers. At least four people with disabilities were among the victims. Rising insecurity in the Nana-Grébizi province led to dozens of attacks on international humanitarian organizations by armed groups and bandits between August and October, impairing life-saving assistance.

An armed group 3R, meaning “Return, Reclamation, Rehabilitation,” comprised of Muslim Peuhl, emerged in western Ouham-Pendé province under the command of General Sidiki Abass. As fighting between 3R and anti-balaka increased in 2016, scores of civilians, both Muslim Peuhl herders and non-Muslim farmers, were killed. Credible reports indicated that both sides committed rapes, reflecting the widespread problem of sexual violence in the conflict since 2013.

The Ugandan rebel group the Lord's Resistance Army (LRA) remained active in the southeast with allegations of increased killings and abductions of civilians.

While the capital Bangui stabilized in late 2015 after the violence of the previous months, armed militias raped or sexually assaulted at least 25 women and girls in and around the M’poko displacement camp between September and December 2015. In some cases, the perpetrators raping the women and girls said it was to punish them for allegedly interacting with people on the other side of the sectarian divide. Survivors of sexual violence continued to face stigma, rejection, and other barriers to accessing essential services and justice.

Conditions for internally displaced persons and refugees remained harsh. Many displaced people, such as those in Ouaka and Ouham provinces, had little or no humanitarian assistance. Persons with disabilities at displacement sites faced barriers to access sanitation, food, and medical assistance. The M’poko displacement camp in Bangui held approximately 20,000 people by the year’s end.

In southwestern parts of the country, small pockets of Muslims lived in enclaves protected by UN peacekeepers. In central and northwestern parts of the country, displacement increased as a result of the violence. Attacks by Seleka in the southern Ouaka province displaced 3,500 people and fighting in Ouham-Pendé displaced between 5,000 and 10,000. Approximately 20,000 people were displaced after the Seleka attacked the displacement camp in Kaga-Bandoro in October.

At least eight anti-balaka leaders participated in parliamentary elections, three of whom won seats, including Alfred Yékatom, also known as “Rombhot.” Amnesty International accused Yékatom of having participated in and ordering killings of civilians in 2014 and the UN imposed sanctions on him in 2015. The UN Panel of Experts on the Central African Republic identified Yékatom as having intimidated voters and harassed political competitors in Mbaïki, his constituency, during the 2016 electoral campaign. Another victorious candidate, militia leader Eric Pogola, threatened staff of a political rival and allegedly sent armed fighters to polling stations on election day in the Sangha-Mbaéré province.

In early February, Human Rights Watch issued a report documenting sexual abuse and exploitation by MINUSCA peacekeepers of at least eight women and girls between October and December 2015 around Bambari in the Ouaka province, including the rape of a 14-year-old girl and the gang-rape of an 18-year-old woman. In response to the allegations, MINUSCA promptly sent home 120 peacekeepers from the Republic of Congo.

The contingent of peacekeepers from the Democratic Republic of Congo, who also faced numerous other allegations of sexual exploitation and abuse, were repatriated at the end of February for failing to meet UN standards for equipment and preparedness. Criminal proceedings by DRC authorities into sexual abuse and exploitation by peacekeepers from that country began in Kinshasa, but were adjourned in June to explore ways of interviewing victims.

In March, international media reported additional allegations of sexual exploitation and abuse by MINUSCA peacekeepers. MINUSCA announced it was investigating the cases and would take action against perpetrators.

In June, the government of the Republic of Congo announced that a judicial procedure was ongoing against an unspecified number of Congolese MINUSCA peacekeepers based in Mambéré who had allegedly beaten two men to death in 2015.

Impunity remained one of the main challenges in addressing past and ongoing atrocities. In August and September, the criminal court in Bangui tried 55 cases, some of them dealing with serious crimes such as rape and murder. However, the court did not address any abuses or alleged war crimes related to the conflict.

Resource constraints and administrative hurdles impeded operationalizing the Special Criminal Court, a hybrid court with national and international judges and prosecutors that will focus on grave international crimes committed since 2003. In a positive step, the minister of justice announced in July that the court’s special prosecutor would be appointed before the end of 2016. In August, the UN and the government signed a document that outlined their tasks and responsibilities related to the court.

The Office of the Prosecutor at the ICC continued its investigations throughout the year into serious crimes committed by the Seleka and anti-balaka. The ICC issued no arrest warrants in 2016.

A previous ICC investigation led to the conviction of Jean-Pierre Bemba Gombo, a former vice president of the Democratic Republic of Congo. Forces from Bemba’s Movement for the Liberation of the Congo (Mouvement pour la Libération du Congo) were active in the Central African Republic in 2002 and 2003, acting at the behest of then-President Ange-Félix Patassé to repress a coup attempt by then-Gen. François Bozizé.

On March 21, 2016, ICC judges found Bemba guilty of rape, murder, and pillage under the legal principle of “command responsibility.” On June 21, the court sentenced him to 18 years in prison. In September, Bemba’s legal team filed an appeal. The prosecutor, who had sought a 25-year sentence, has indicated that her office would appeal the sentence to “reflect the totality of Bemba’s culpability.” On October 19, ICC judges found Bemba and four associates guilty of witness tampering because they attempted to bribe witnesses.

France began withdrawing its peacekeeping forces in October. They are expected to retain approximately 300 troops in the country.

At the Brussels International Conference for the Central African Republic on November 17, the European Union, the country’s largest donor, pledged €409 million (US$450 million) over five years for peace building, development and humanitarian assistance. Overall pledges from the conference totaled €2.06 billion ($2.28 billion).

In 2016, the United States provided $95 million in humanitarian aid. The total humanitarian response met only 32.2 percent of the country’s funding needs. The Netherlands, US, and the UN were the principal donors to the Special Criminal Court, but the court’s five-year budget remained only partially covered.

In April, the EU approved the establishment of a military training mission, EUTM RCA, operational for an initial period of two years to train two battalions of the national army.

In August, the Ugandan military began withdrawing troops from an AU-led offensive against the LRA in the southeast. At time of writing, the US had decided to continue counter-LRA operations in the country.