(Nairobi) – Kenyan security forces have forcibly disappeared at least 34 people in the past two years during abusive counterterrorism operations in Nairobi and in northeastern Kenya, Human Rights Watch said in a report released today. Kenyan authorities should end the abuses in counterterrorism operations and promptly investigate the enforced disappearances and deaths of detainees in the northeast.

The 87-page report, “Deaths and Disappearances: Abuses in Counterterrorism Operations in Nairobi and in Northeastern Kenya,” documents 34 instances in multi-agency security operations in which the military was actively involved in raiding homes and compounds to arrest people who were allegedly suspected of links with the armed Islamist group, Al-Shabab. But months, and in some cases over a year, later, suspects have not been charged with any crimes and families cannot locate them. In each case, although families reported the disappearance to the police and sought help from various authorities, the authorities failed to inform them of the detainees’ whereabouts or to properly investigate allegations of abuse. 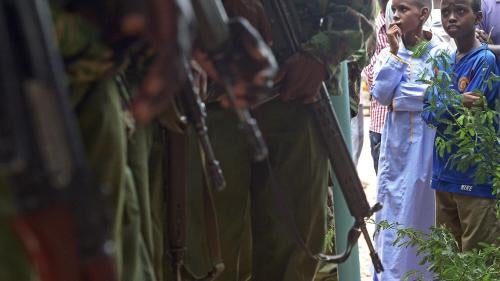 “People in northeastern Kenya deserve protection from Al-Shabab attacks, not further abuse from the authorities,” said Ken Roth, Executive Director at Human Rights Watch. “Rounding people up and refusing to disclose their whereabouts is a serious crime and only compounds fears and mistrust in the security forces.”

Human Rights Watch spent more than eight months investigating the abuses in Nairobi and in the northeastern counties of Garissa, Wajir, and Mandera, and interviewed 117 people including victims and witnesses of counterterrorism operations, Imams, government officials, journalists, lawyers, human rights activists, police and military officers, and local community leaders. Human Rights Watch also conducted follow-up interviews in Nairobi and by phone with victims and witnesses in the northeast.

Concern for the well-being of the 34 people is compounded by at least 11 cases in the past two years in which dead bodies of people previously arrested by state agents have been found, in some instances far from the location of their arrest. As far as Human Rights Watch is aware, police have not meaningfully investigated these deaths. In one instance, a body was exhumed in Mandera in response to public demands, but the government has not conducted an inquest or any meaningful investigations as required by Kenyan law.

Human Rights Watch found that those arbitrarily arrested during the security sweeps included young ethnic Somali Kenyans, Imams, and Islamic school teachers. They were detained, at least initially, in military bases and makeshift military camps in forests in the northeast and other parts of the country. In some cases, police officers arrested people, and then handed them over to the military.

Abuses in Counterterrorism Operations in Nairobi and in Northeastern Kenya

A 48-year-old man told Human Rights Watch that police arrested him in May 2015, held him for two days at Wajir police station and then transferred him to Wajir military base. He said that military officers later arrested his elder brother and held them both at Wajir military base. The military officers kicked, slapped, and beat the man, and gave him electric shocks, then released him after 15 days. His brother’s whereabouts are unknown.

In another case, on March 21, 2015, four military officers arrested Abdiwelli Ibrahim Sheikh, 28, at home and witnesses saw military officers take him to Mandera military camp. He has not been seen again. “The security officers said they wanted to ask him a few questions and then they would set him free,” said a 50-year-old man who was with Abdiwelli at the time of his arrest. “We never knew he was being taken away for good.”

Families have searched far and wide for news about their loved ones, including in detention facilities, asked political and religious leaders for their help, and, in some cases, turned to social media to try to locate the missing relatives. Some families filed habeas corpus petitions, seeking a court order to compel the government to provide information. Officials, however, have denied any knowledge of the detainees’ whereabouts.

“If Kenyans are disappearing, police have the mandate to actively work with families and witnesses to locate these people,” Roth said. “The government’s silence speaks volumes.”

Counterterrorism law enforcement operations in northeast started soon after the September 2013 attack on Westgate mall in Nairobi, Kenya’s capital, but intensified after the April 2015 attack on Garissa University College, in which 147 people, including 142 students, were killed. Al-Shabab claimed responsibility for both attacks. Al-Shabab has claimed responsibility for several other high profile attacks in Kenya, including in the northeast region.

In response to these attacks, the Kenya Defense Forces, Kenya police, National Intelligence Service, and Kenya Wildlife Service (KWS) rangers have deployed to the northeastern region, in some cases working with other units in Nairobi.

Human Rights Watch believes that the 34 people are victims of enforced disappearance, defined in international law as any deprivation of liberty by state agents, followed by the state’s refusal to acknowledge the detention or concealing of the fate or whereabouts of the person. Kenya police and military did not reply to Human Rights Watch questions about the whereabouts of the 34 people.

Government action to address abuses in counterterrorism operations is long overdue, Human Rights Watch said. The government should provide basic information regarding the identities, fate, and whereabouts of people arrested in these operations, and ensure basic due process rights for anyone who is arrested or in custody.

The Kenyan police and military should urgently investigate allegations of disappearances, deaths and torture in the northeast, and bring those responsible to justice. The president should establish a special commission of inquiry to investigate and establish the extent of the abuses in Kenya’s counterterrorism operations.

“There is no doubt that Kenya faces serious security challenges, but the authorities have an obligation to respond effectively and respect due process in any law enforcement operation,” Roth said. “The disappearances and uninvestigated deaths in the northeast are illegal and risk alienating local communities, whose cooperation is needed.”

Selected accounts from people interviewed for the report:

“They told Omar that they wanted to ask him questions related to national security after which they would set him free. They did not introduce themselves but they are well-known Criminal Investigations Department (CID) officers so Omar did not ask them to identify themselves. That was the last time we saw him.”
– A man whose relative, Omar Yusuf, was arrested in the town of Mandera in April 2015.

“The officers carried the five men and threw them in the Land Cruiser-like vehicles that had Africa Union Mission in Somalia (AMISOM) insignia and drove away. We later came to understand from various accounts of those who spotted the vehicles on the road, [that they were moving] in the direction of Somalia.”
– A 50-year-old man who was present when Kenya Defense Forces officers raided a restaurant in the town of Garissa, shooting and arresting five men, including Hassan Abdullahi, whose whereabouts remain unknown.

“Police at Garissa police station have never helped us and I don’t think they care. They told us that on that day they also heard gunshots but they denied knowledge of what had happened. The Garissa county commissioner told us he knew nothing about what had happened but he was clearly not willing to help find out. A National Intelligence Service officer told us that he had tried to call police on the phone after he heard gunshots to inquire what was happening. Within minutes, he received a call from a concealed line ordering him to vacate the area and never talk about the issue again.”
– A 25-year-old relative of one of the missing men.

“[My brother] was picked up from his home town where he was born, where he grew up, where he had children, and now no one knows whether he is alive or not. So everyone can feel how painful that is. To see the dead body of your family member is painful but you at least know he is dead.”
– A man whose brother has not been seen since police arrested him on April 26, 2015.