Donate Now
(Kampala) – The government of Uganda has utterly failed to hold security forces accountable for nine killings during protests in April 2011. Families of those killed have tried – unsuccessfully – to push for justice and seek compensation. Human Rights Watch released a video today featuring interviews with families of victims. 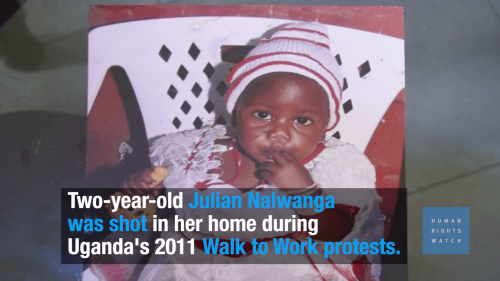 Opposition political activists called on the public to ‘walk to work’ to protest escalating food and fuel prices in the wake of the 2011 elections. The government contended that the action constituted unlawful assembly and sent police and military to obstruct protests in several towns. Government forces killed at least nine bystanders – six in Kampala, two in Gulu, and one, a child, in Masaka.

“Members of Uganda’s military and police have committed serious crimes, particularly during politically charged demonstrations, confident they wouldn’t be punished,” said Maria Burnett, senior Africa researcher at Human Rights Watch. “Ugandan law guarantees the right to free assembly, speech, and association, but security forces disregard these basic freedoms, and the victims of their abuses and their families never see justice.”

Security forces responded to people walking to work with brutality, beating and arbitrarily arresting protesters and even bystanders in several towns, and firing live ammunition. Human Rights Watch investigated the abuses in 2011, interviewing more than 60 people including victims and their relatives, witnesses, medical staff, representatives of independent organizations, police, military, and journalists.

Despite some comments from state officials to the contrary, none of the nine victims of extrajudicial killings were involved in rioting. Human Rights Watch also found no evidence that the protesters had guns or other potentially lethal weapons.

In response to the nine killings, police made arrests only for the fatal shooting of 2-year-old Julian Abigail Nalwanga in Masaka on April 21, after significant media attention. A member of a Local Defence Unit allegedly shot and killed Nalwanga, who was inside her home during the protests in Masaka that day.

A few days later, Inspector General of Police Kale Kayihura visited her family, paraded two suspects before the media, heard testimony from members of the community and promised the alleged killers would face justice before military courts. A general court martial later heard evidence from both sides and final submissions in April 2012, but there has been no ruling. One defendant was released at that time and the second was released on bail in December 2015, after almost 4 years on remand.

The child’s mother told Human Rights Watch recently: “Whenever I think of the manner in which my child was killed, I feel sick. The killer was released, he is back working, he moves freely in town, as if what he did was not bad.”

The family also filed a complaint to the Uganda Human Rights Commission, which can only award compensation for human rights violations. Rulings are against the Attorney General rather than the person who committed or was responsible for the abuse. Those who ordered or carried out the crime face no punishment. On November 21, 2013, the commission ordered the government to pay 30 million Ugandan shillings (US$8,500) for a violation of the right to life. The government has yet to pay.

“The lack of justice for the ‘Walk to Work’ killings has sadly come to illustrate the Ugandan government’s disregard for basic rights during public assemblies,” Burnett said. “When security forces abuse protesters, police and government officials publicly promise justice, but it’s all show and no action. As time passes, victims are forgotten.”

The two killings in Gulu – of Dan “Musa” Wasaga and Charles Odur – were particularly deplorable because both occurred far from the protest and the victims were shot in the back, Human Rights Watch said. The military carried out a preliminary investigation at the time, and determined that soldiers were responsible but did not identify which individual members of the military shot the men.

The brother of one victim told Human Rights Watch: “We want justice but we lack the capacity to seek it and we do not know where to start anymore. Our interest is not only compensation from the government, there is no amount of money that equals the life that was taken away. My brother had his responsibilities, he had children to educate, he had wives to take care of, he was still a young man and he had a bright future ahead of him.”

Violence spiked on April 28 and 29, when the media captured footage of plain-clothes security and uniformed police officers violently arresting the opposition leader, Dr. Kizza Besigye. The following day, residents of some Kampala districts responded by burning debris in streets and throwing stones at security agents. Eighty-four injured people were taken to Kampala’s Mulago Hospital, 64 with bullet wounds. Police said they arrested about 360 people from Kampala and Mbale, in eastern Uganda, where protests also occurred.

At the time, there was widespread criticism of the security force actions and there were calls for restraint from independent groups, the Uganda Human Rights Commission, the United Nations High Commissioner for Human Rights, and Uganda’s Interreligious Council. One hundred and five Ugandan and international nongovernmental organizations and unions wrote to President Yoweri Museveni in June 2011 to urge the government to promptly set up a transparent process to investigate human rights abuses during the April protests.

Since then, new police tactics appear to involve unlawfully preventing virtually any protest at all, Human Rights Watch said. In the period before February 2016 election campaigns, police repeatedly denied opposition leaders’ requests to hold peaceful public rallies and used teargas against people gathered to hear opposition candidates. Since February 19, the day before the Electoral Commission declared President Museveni the winner of a new term, police held Dr. Besigye, the main opposition presidential candidate, at his home for at least 44 days against his will. In that period, police arbitrarily arrested and detained him nearly every time he attempted to leave, but never brought any charges.

The government of Uganda should conduct an independent, impartial investigation aided by international experts into the actions of soldiers and police in April 2011 and other killings and beatings during protests, Human Rights Watch said. It should make a commitment to conduct criminal investigations of each incident within a specific time frame, prosecute those against whom there is sufficient evidence in accordance with international fair trial standards, and ensure fair compensation to victims.

Furthermore, the government should ensure that fundamental rights such as the rights to freedom of assembly and expression are fully protected and can be exercised without risk of censure. Any regulation or restrictions on the exercise of these rights should comply with international law, and be strictly necessary and proportionate.

Human Rights Watch urged donors to the Ugandan government to press the government to respect Ugandans’ rights to assembly and expression and to urge officials to substantially amend the Public Order Management law in line with international human rights law. Donors should offer international expertise to conduct credible, independent investigations into the April 2011 killings, among other killings during protests and rallies in Uganda.

“If the Ugandan government wants to avoid a repeat of the April 2011 violence, stopping people from assembling is no solution,” Burnett said. “The solution is to respect international law and allow all Ugandans to criticize the government without fear of reprisals.”

List of Fatalities During ‘Walk to Work’ in April 2011