There has always been a very fine margin between life and death in the dry lands of Kenya’s northern Turkana County.

But while Turkana has always been poor, underdeveloped and neglected, the twin threats of a changing climate and the devastation of Lake Turkana are making the situation worse.

One Turkana elder I spoke with named Francis was blunt: “The rains have stopped coming — our herds are dead, there is no water. See these children? They will never grow old like me, there is no future for the Turkana people.” 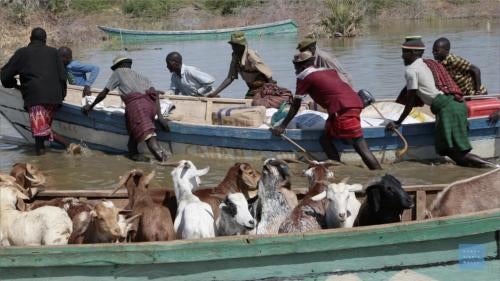 Climate change and development projects in Ethiopia are squeezing the Turkana and their already fragile coexistence with the land and lake.

The Turkana people have long struggled, and persevered, in a harsh landscape of scrub vegetation and cyclical drought. Generations have survived by grazing livestock and fishing in Lake Turkana, the world’s largest desert lake. The future, however, is uncertain.

Temperatures in Turkana County have increased 2-3 degrees Celsius in the past 45 years, increases far steeper than global averages. This has pushed the Turkana people into an even more precarious situation: herd sizes are decreasing, water is more difficult to access, animals are less healthy, and there is increased conflict over what grazing lands are left.

For the Turkana people, climate change is not an abstract concept — it is part of their everyday lives and impacts their ability to get food and water.

Historically, during times of drought, the Turkana turn to longstanding strategies to buffer against the loss of their herds. One is fishing in Lake Turkana to earn income to buy animals to replenish their herds. Sadly, this thriving and invaluable fishery is also under threat from developments across the border in Ethiopia.

Ninety per cent of the water in Lake Turkana comes from Ethiopia’s Omo River. But the Ethiopian government is embarking on a massive transformation of the Omo River Valley, including 2,000 square kilometres of irrigated sugar cane plantations, a cascade of dams, sugar processing factories, and other commercial farms.

The Gibe III dam — the third of five dams planned along the Omo River — is complete and the sugar plantations are in the early stages of operation.

The impact of this project on the 200,000 indigenous Ethiopians living in the lower Omo valley is dire and already being felt: Their grazing lands are being cleared and they have not received any compensation for their lost land and livelihoods.

Moreover, hydrologists predict that so much water will be used in the sugar plantations and other developments that the Omo River could be reduced to a trickle, potentially devastating Lake Turkana and the fishery that sustains thousands of Kenyans.

The developments may also trigger increased conflict among communities that depend on their livestock, which are already competing for grazing lands and water.

Located between conflict-ridden South Sudan and Ethiopia’s highlands, Ethiopian indigenous groups may see little choice but to migrate to Kenya with their animals in search of grazing land, risking violent confrontations with the Turkana.

Francis summed up the concerns of many Turkana whose future depends on the lake: “If the lake dies, our way of life will die along with it too.”

Ethiopia is pursuing a development agenda that, whatever its benefits, comes at a high cost to many indigenous peoples and other marginalised groups. It needs to take steps to mitigate the harm its lower Omo valley development projects is causing.

While Kenya criticised the Gibe III dam, which may have a disastrous effect on the lives of many Kenyans, its criticism ceased when the two countries signed a deal to export electricity to Kenya in 2012.

While Kenya desperately needs electricity, this should not prevent it from pressing the Ethiopian government to mitigate any serious effects identified with the Gibe III dam and the irrigated commercial agriculture on the downstream communities of Lake Turkana.

The Kenyan government should also ensure that any government climate change policies focus on reducing the burden of those most affected by climate change, including women and indigenous people like the Turkana.

Not all news in Turkana is bleak: Oil development and a massive underground aquifer could provide alternative livelihoods for some — but only if the rights, interests and unique needs of the Turkana are included in all planning and project design decisions around these developments.

The Turkana, are, as Francis says, “a proud culture and are a proud people.” But pride is little match for the impact of climate change or development schemes that disregard affected communities. Protecting the Turkana and their culture will require respect for their human rights.

Felix Horne is an Africa researcher at Human Rights Watch