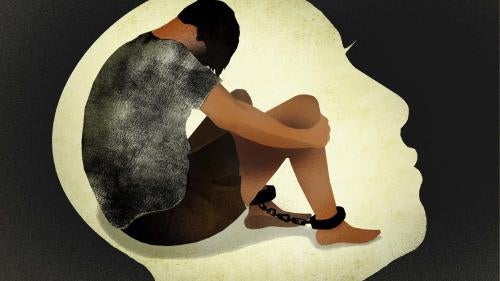 Long before the Covid-19 pandemic grounded much of the world, lockdown, confinement, violence, and isolation was the daily reality for hundreds of thousands of people with disabilities around the world.

Many are locked in sheds, cages, or tethered to trees and are forced to eat, sleep, urinate, and defecate in the same tiny area, sometimes for years at a time. Why? Simply because they have a psychosocial disability (mental health condition). This inhumane practice—called “shackling”—occurs because of widespread stigma surrounding mental health, and a lack of access to adequate support services, both for those with psychosocial disabilities and for their families.

Hundreds of thousands of men, women, and children—some as young as young as 10—have been shackled at least once in their lives in over 60 countries across Asia, Africa, Europe, the Middle East, and Latin America.

While Covid-19 has exposed the importance of psychological wellbeing and the need for connection and support within our communities, it has exacerbated the risk to people with psychosocial disabilities who are often shackled in homes or overcrowded institutions without proper access to food, running water, soap and sanitation, or basic health care. In many countries, Covid-19 has disrupted basic services, leading to people being shackled for the very first time or returning to life in chains after having been released.

Sodikin, a 34-year-old man with a psychosocial disability, is one of many whose life has been upended by the pandemic. For more than eight years, Sodikin was locked in a tiny, thatched shed—just two meters wide—outside his family home in West Java, Indonesia. Without government services, his family felt they had no choice but to lock him up. Within this small radius of his life, lit by a solitary lightbulb, Sodikin slept, went to the bathroom, and ate food that his mother would pass to him on plate through a window no larger than the palm of his hand. Over time, his muscles atrophied from the lack of movement.

Despite the odds, once he got access to mental health and other services, Sodikin rebuilt his life. He started to work in a clothing factory stitching boys’ school uniforms—becoming the breadwinner of his family—and even did the call to prayer at his local mosque, a prestigious community role. And the shed in which he was confined for eight years? His family torched it and grew a garden in its place.

But when Covid-19 hit the locality of Cianjur in rural Indonesia, Sodikin’s hard-earned life crumbled. As his community went into lockdown, the factory closed, his daily routine was disrupted, and all forms of community-based support were suspended. Sodikin’s family locked him in a room once again.

According to Michael Njenga, chairperson of the Pan-African Network for Persons with Psychosocial Disabilities, “restrictions on movement, such as lockdowns and curfews, have caused a disintegration in available support services. Even in areas where mental health or other community-based services were available, the government redirected resources to other programs, specifically to address the pandemic. This has had a huge impact in our efforts to reach out to people who could now be locked up in institutions or even shackled within their communities.”

With extended lockdowns, physical distancing, and a widespread disruption in social services, the pandemic has frayed our sense of community and ushered in a looming mental health crisis.

Out of 130 countries that responded to a survey by the World Health Organization, 93 percent reported disruption in psychosocial services. More than 40 percent of countries had a full or partial closure of community-based services. In addition, three-quarters of mental health services in schools and workplaces were disrupted, on top of about 60 percent of all therapy and counselling services. And while governments around the world have recognized the need to address mental wellbeing and provide psychosocial support, this has not led to an increase in voluntary services in communities.

Covid-19 marks a turning point for governments to pay greater attention to the importance of mental wellbeing and psychosocial support. Any one of us could experience a mental health crisis or secondary trauma from the uncertainty, fear, anxiety, and distress resulting from isolation, economic hardship, increased family violence, and daily challenges of this pandemic. But consider what that means for someone whose life is confined to chains. Irrespective of age, gender, ethnicity, socio-economic status, or cultural background, health—including mental health—is one of the most basic and necessary rights of human beings, guaranteed under international law and key to achieving the United Nations Sustainable Development Goals.

As countries look to rebuild better, governments should focus on those most at risk, including the hundreds of thousands of people with psychosocial disabilities around the world who have lived, and still do live, in chains. The risks of the pandemic for people who are shackled should be a wake-up call to governments to ban this practice, combat stigma associated with mental health, and develop quality, accessible, and affordable community services, including psychosocial support. Sodikin and countless others deserve a life of dignity, not chains.