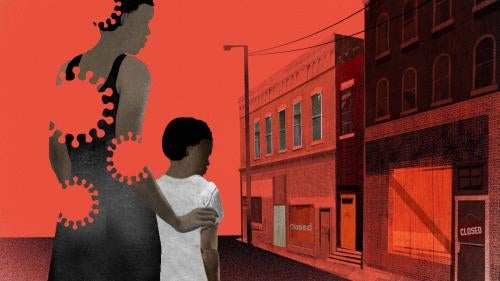 The Other Pandemic: Fighting Inequality as We Beat Back Covid

By Lena Simet and Komala Ramachandra and Sarah Saadoun

At the dawn of 2020, our world was already in crisis. High and rising economic inequality meant that someone born with few resources could see their basic human rights, like food and decent housing, violated. Like Sonía Pèrez, who sells tamales and rice pudding on the streets of New York City, millions of people were struggling to keep a roof over their heads and feed their families.

The Covid-19 pandemic only made things worse.

Pèrez, a single mother who supports her four children with her business, had no choice but to stop working once the pandemic intensified. Not only were there no customers, but she feared that her diabetes would put her at greater risk for a serious case of Covid-19. Like many others with low incomes and few savings, she was more likely to become infected by, and die of, the virus. People with lower earnings saw their jobs disappear at a higher rate; even more so if they are a woman. As a result, many faced hunger, or homelessness.

Many governments did too little to help. And while more than 9 percent of the world’s population may experience extreme poverty manifested in a severe deprivation of basic needs, the combined wealth of global billionaires reached new heights. Up by $1.5 trillion in the last year, an amount that could lift everyone in extreme poverty—all 680 million people—above $5.50/day for a year.

The economic gender gap has widened too, as women have disproportionally lost work, and had lower social protection coverage. With school closures and a move towards digital education, many have had to juggle—or choose between—work and childcare, without supportive government and workplace policies to mitigate the impact.

Covid-19's economic recession is global. But the level of pain largely varies by where a person lives. The governments of the Netherlands or Germany targeted relief at low-income earners, covering up to 90 percent of lost wages if businesses did not lay off their employees. Indonesia provided free medical treatment to all, regardless of their registration to the national health insurance scheme.

In other countries, people desperately in need of support were left high and dry.

In the United States, much of the relief was temporary. In the first months of the crisis, poverty declined due to an expanded social safety net. But much of the relief expired in July. By October, more than 8 million people fell into poverty—measured by the supplemental poverty measure that weighs income with living costs—and one in two households had trouble paying everyday expenses, like food or rent. Millions of people reported they could not access healthcare, as they lost their insurance. And from the start, relief excluded informal workers or undocumented people, like Sonía Pèrez.

The disparity reflects not only the world’s differing safety nets and decisions by governments as to whether to protect basic economic rights, but also countries’ choices over the use of Covid-19 relief funds.

Nigeria, Africa’s biggest economy, received the largest Covid-19 emergency financing package (US$3.4 billion) from the International Monetary Fund (IMF) to protect jobs and businesses, in addition to millions in other forms of direct aid. But it is not clear how these funds were used, and Human Rights Watch found that the vast majority of urban poor in Lagos were left without any financial or in-kind relief.

The global recession will have deep and lasting aftershocks. As governments continue to try to save their economies, they need to ensure that relief reaches the millions of people who are struggling to make ends meet, so that everyone has food, housing, and other essentials, and that relief is not captured by a wealthy few.

Countries will have to take bold action to build towards a more just and rights-based economic recovery that confronts, not exacerbates, inequality. Ensuring a role in decision-making for those most affected by the economic crisis, and those meant to benefit from relief assistance, will be critical.

It means investing in public services and social protection systems, and introducing or strengthening progressive fiscal policies and taxation to fund programs, so that everyone can fulfill their right to a decent standard of living.

In coming years, governments are expected to face budget shortfalls and growing challenges repaying their debts. But international economic actors, like the World Bank and IMF, should support countries in establishing adequate social protection floors and progressive tools for raising revenue instead of enforcing harmful austerity. Portugal’s opposition to such austerity in 2015 demonstrates that another way of bringing an economy back on track is possible; one that occurs alongside stronger social protection, a higher minimum wage, and better pensions.

Addressing economic inequality should be a priority for economic recovery efforts to prevent hundreds of millions of people falling into extreme poverty, many of whom already face intersectional forms of discrimination that limit their access to economic rights. Governments should be treating economic rights as the basic legal duties they are, and ensure they guarantee them, for everyone.

Had these issues been addressed before the pandemic, its rights impacts may have been less severe for Sonía Pèrez, and countless others like her. It is time for governments to correct past mistakes, and commit to imagining paths toward a more equal and rights respecting world.