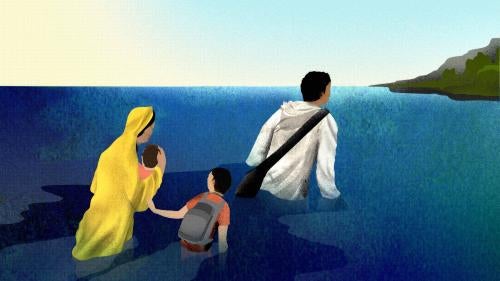 Rethinking Asylum on a Warming Planet

The Teitiota family from a little-known Pacific island didn’t intend to become a catalyst for expanding the concept of asylum; but they became one anyway.

In 2015 New Zealand denied the family’s asylum claim and deported them, despite the parents’ plea that their three children’s health and well-being were at risk amid crop failure, withering coconut trees, overcrowding, disease, and conflict caused by rising sea levels on the Tarawa atoll in the Republic of Kiribati.

New Zealand’s Supreme Court ruled that the family did not meet the 1951 Refugee Convention’s “well-founded fear of being persecuted” standard.

On January 7, 2020, the United Nations Human Rights Committee—the expert body that monitors government compliance with the International Covenant on Civil and Political Rights—rejected the family's claim that New Zealand had violated their right to life by deporting them. While accepting that rising sea levels would likely make Kiribati uninhabitable, the committee said it was not clearly arbitrary for the New Zealand authorities to conclude that the adaptive measures the Kiribati government was taking were sufficient at the time.

But the committee also underscored the need for a broader understanding of the principle of non-refoulement—the prohibition on returning people who face threats to their lives or freedom— under the Refugee Convention. In the absence of national or international action, the committee said, rising sea levels and other effects of climate change may expose individuals to violations of their right to life, thereby triggering the principle of non-refoulement.

“The obligation not to extradite, deport or otherwise transfer pursuant to article 6 of the Covenant [which protects the right to life] may be broader than the scope of non-refoulement under international refugee law,” the committee reiterated, “since it may also require the protection of aliens not entitled to refugee status."

The clock is ticking.

Under a "moderate future scenario," which assumes cuts in current greenhouse gas emissions and global warming of 2 degrees, scientists project that the rise of sea level in the next 30 years will put about 150 million people permanently below the high water mark. But if higher emissions persist and average global temperatures rise by more than 2 degrees, scientists project the faster rate of melting ice caps could leave 300 million displaced by the mid-21st century.

While rising sea levels are projected to be especially devastating in Asia and the Pacific, rising temperatures also pose major threats to landlocked countries like Chad, Ethiopia, South Sudan, and Zimbabwe. In 2020 the West Indian Ocean dipole (or Indian Niño)—an oscillation of sea surface temperatures that causes extreme weather events and vicissitudes of drought and heavy rains—contributed to high levels of rainfall in the usually arid Horn of Africa, resulting in the worst infestation of desert locusts in 70 years in Kenya, and significant food insecurity throughout East Africa and the Horn of Africa. Flooding, drought, famine, and disease are not only eroding arable land, but also exacerbate the predations arising from armed conflict, lawlessness, and oppression.

Regional legal instruments in Africa, Latin America, and Europe have expanded on the post-World War II definition of refugees, and the principle of non-refoulement has been incorporated in the Convention against Torture, and other human rights treaties.

But the grounds of protection globally remain constricted. And in recent years, influential governments have chosen to interpret the grounds to qualify for asylum even more narrowly. For example, in 2020 the administration of US President Donald Trump proposed new regulations that would exclude gender as a cognizable ground for membership-in-a-particular-social-group protection.

But the effects of climate change show the need for an expanded concept of international protection. Is the danger of drowning or starving as a result of climate change no less of a threat in need of protection than being persecuted for one’s identity or beliefs? Whether the cause of suffering is intentional or not, the harm to life and limb can be equally severe.

Whether environmental disasters are the direct cause of displacement or an aggravating factor in combination with violence, inequality, and poor governance, millions of people worldwide have already been displaced internally, or forced to seek refuge in neighboring countries because their lives are at risk at home.

A realistic and responsive global legal protection framework for asylum, should not only protect people from return to persecution, torture, or ill-treatment; it should recognize that people also need to be protected from being returned to face serious threats to life or physical integrity, because of a real risk of violence or exceptional situations for which there is no adequate domestic remedy. Such situations include natural or human-made disasters, including from the effects of climate change.

The vast majority of climate-induced displaced people, will try to stay in their home countries and will not require a new legal standard for their protection. But for those facing serious home-country threats that cannot be remedied, the existing legal framework of refugee and human rights protection needs to be expanded.