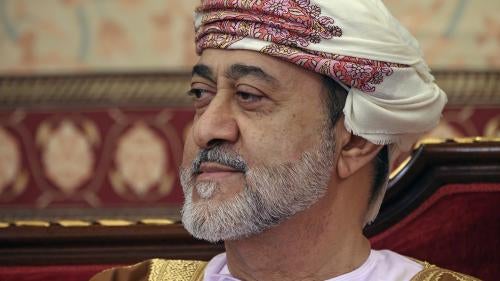 Sultan Qaboos bin Said Al Said, the longest-serving ruler in the Arab World, died in January at age 79 after ruling since 1970. Qaboos recommended Haitham bin Tariq, the former culture minister, as his successor and the choice was quickly ratified by the ruling family. Sultan Haitham previously served as head of Oman’s “Vision 2040” committee, the government’s 20-year roadmap for social and economic reform.

Omani authorities continued to block local independent newspapers and magazines critical of the government, harass activists, and arrest individuals for their real or perceived gender identity and sexual orientation. Migrant workers in Oman were offered little protection amid the Covid-19 pandemic.

Under Sultan Haitham bin Tariq, freedom of expression remained squeezed. Security agencies, particularly the Internal Security Service, continued to target activists and citizens, often for views they expressed on social media platforms like Facebook and Twitter. In one case, activist and blogger Awadh al-Sawafi was arrested in June for tweets that were critical of government institutions. On June 16, the court sentenced al-Sawafi to a suspended one-year prison sentence and a ban on using social media for one year for violating the Cyber Crime Law by publishing information harming public order. Similarly, on June 10, the Court of First Instance in Muscat sentenced former Shura Council member Salem al-Awfi and journalist Adel al-Kasbi to one year in prison each for “using information technology to spread harm to public order” under the Cyber Crime Law. Their charges relate to tweets that criticized government figures and the Shura Council.

Civil society and advocacy organizations were similarly targeted for social media posts. Notably, the women behind the “Nasawiyat Omaniyat” (Omani Feminists) Twitter account were reportedly summoned for questioning by authorities and forced to suspend their activity on the account, seemingly in retaliation for their work on women’s rights.

The trial of writer and civil society activist Musallam Al-Ma’ashani was postponed indefinitely due to Covid-19. Al-Ma’ashani was arrested in November 2019 as he was crossing the border from Yemen. Authorities previously arrested Al-Ma’ashani in 2013 in retaliation for his literary work.

A United Arab Emirates (UAE) court sentenced Abdullah al-Shaamsi, an Omani man living in the UAE, to life in prison in May 2020 for allegedly spying for Qatar, in addition to other charges that were not made public, following a trial marred with due process violations. The evidence presented against al-Shaamsi included tweets he denied making and online competitions he participated in at age 17.

In response to the spread of Covid-19, the Omani government decided to “exceptionally” and temporarily ease some restrictions on some Voice Over IP (VoIP) apps and platforms, including Microsoft Teams, Skype for Business, Google Hangouts, and Zoom. WhatsApp, Skype, and FaceTime remained blocked, reducing the ability of Omanis and migrant workers to connect and communicate with their families and communities abroad amid the public health crisis and associated movement restrictions.

In July 2020, Sultan Haitham offered an amnesty to several high-profile political dissidents living outside Oman. Several Omani activists rejected the offer, however, as it required writing an apology and thank you letter to the sultan, according to activists who spoke to Human Rights Watch.

Authorities censored 51 literary works from the 25th annual Muscat International Book Fair, either due to the authors’ political activities or the content of their work. Books by Omani authors Saeed al-Hashimi, Suleiman al-Maamari, Nabhan al-Hanashi, Hamoud Saud, Mohammed al-Fazari, and Zaher al-Mahrouqi have been repeatedly banned.

Oman continued to discriminate against women with respect to marriage, divorce, inheritance, nationality, and responsibility for children in its Personal Status Laws. Women’s representation in public office or senior legal positions remains disproportionately low. To date, no woman has ever acted as a judge in the country.

Oman’s revised 2018 penal code increased penalties for consensual intercourse outside marriage. Article 259 punishes consensual intercourse outside marriage, between men and women, with six months to three years’ imprisonment (previously three months to one year in prison), and at least two years if either person is married (previously one to three years’ imprisonment). For a prosecution to proceed, the spouse or the guardian of the accused must file an official complaint, or if there is no guardian found, a prosecutor can still file a case.

The revised penal code also now criminalizes non-normative gender expression, making Oman one of the few countries in the world that directly criminalizes gender expression. Article 266 provides for a prison sentence of one month to one year, a fine of 100 to 300 rial (US$260-780), or both for any man who “appears dressed in women’s clothing.”

Additionally, while the previous penal code punished same-sex relations only if they led to a “public scandal,” article 261 of the new penal code punishes consensual sexual intercourse between men with six months to three years in prison. Article 262 more closely echoes the language of the previous penal code, providing for six months to three years in prison for other sexual acts between people of the same sex if a spouse or guardian files a complaint.

In September 2018, two men were reportedly sentenced to four years in prison and a fine for crossdressing and posting photos on Snapchat.

Oman reported hosting over 287,000 migrant domestic workers in February, the vast majority of whom come from South and South-East Asia and East Africa. The government has done little to protect migrant domestic workers rights despite previously committing to review its kafala (sponsorship) system, which ties migrant workers’ visas to their employers and prohibits them from leaving or changing jobs without their employer’s consent. Human Rights Watch has previously documented how the kafala system facilitates multiple forms of abuse and exploitation that many migrant workers face in Oman. Migrant workers are often not paid their full wages, forced to work excessively long hours, and denied adequate food and living conditions. Physical and sexual abuse against migrant workers is also rampant. Their passports are frequently confiscated by their employers. During Covid-19 lockdown restrictions, migrant domestic workers faced increased risks of such abuse, and some were trapped from being able to leave the country due to travel restrictions.

Workers have few avenues for redress and risk imprisonment and deportation for “absconding,” even when fleeing exploitation or abuse. The Omani labor dispute-resolution mechanism at the Ministry of Manpower has no power to force employers or agents to attend dispute-resolution sessions.

Low-paid migrant workers in Oman are acutely vulnerable to human rights abuses that increase their risk of infection from the coronavirus. These abuses include crowded labor accommodations and inequitable access to medical care and health insurance and immigration detention centers and prisons that have often been found to hold detainees in cramped, dismal, and unhygienic conditions.

The strain the Covid-19 pandemic has placed on the economy has in turn threatened the job security of migrant workers as Omani companies seek to cut their operations costs. In April, the state-owned Oman News Agency reported the Finance Ministry’s directive to state companies to replace foreign workers with Omani nationals. Companies were also urged to ask non-Omani employees to “leave permanently,” and were prohibited from firing Omani nationals. Hundreds of non-Omani employees have been laid off since April. Over 1.6 million expatriates live in Oman, comprising almost 40 percent of the total population.

Under Sultan Haitham, Oman’s relations with the United States and the United Kingdom remained strong. Both countries provide Oman with significant economic and military aid, including billions of dollars in automobiles and military aircraft. The US credits Oman with enforcing US sanctions on Iran and blocking the shipment of weapons to Yemen across its borders. The Covid-19 pandemic has caused further economic strain for the Sultanate, which has billions of dollars in outstanding loan payments to China, among others.

Oman’s allies in Europe, North America, and the Middle East offered muted, if any, criticism of its human rights abuses in 2020.