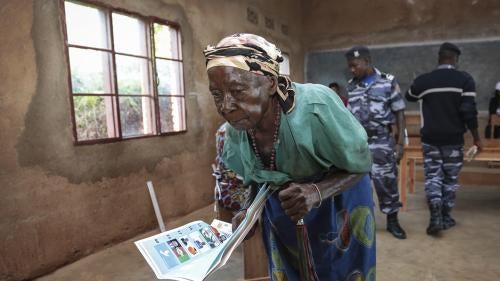 Former President Pierre Nkurunziza, whose tenure was marked by widespread abuses, died in June, days after Évariste Ndayishimiye took power in Burundi following the May 2020 presidential elections. However, the serious human rights situation in the country remained largely unchanged.

The presidential, legislative, and communal elections in May and the senate and local elections in July took place in a highly repressive environment, marred by allegations of irregularities. The ruling National Council for the Defense of Democracy-Forces for the Defense of Democracy (Conseil national pour la défense de la démocratie-Forces de défense de la démocratie, CNDD-FDD) maintained its monopoly on power, with civil society groups reporting an escalation in killings and arbitrary arrests after the elections. A United Nations Human Rights Council-mandated Commission of Inquiry (COI) reported in September that serious human rights violations, which in some cases may amount to crimes against humanity, persisted in 2019 and 2020.

Burundians cast their ballot amid the Covid-19 pandemic, which the government initially downplayed, including by suppressing the real death toll.

Civil society and independent media were still unable to effectively function, and several human rights defenders and journalists remained in jail despite international calls for their release.

Abuses Related to the Elections and Security Incidents

The 2020 elections took place in the absence of any international observation mission and, on election day in May, authorities blocked access to social media and messaging apps throughout the country, restricting independent reporting and information sharing. Throughout the pre-election period, members of the ruling party youth league, administrative officials, and state security forces committed widespread abuses with near-total impunity. Killings, enforced disappearances, arbitrary arrests, beatings, extortion, and intimidation, especially against people perceived to be against the ruling party, persisted. The elections were funded in part by “contributions” forcibly collected from the population between 2017 and 2019.

Since the elections, Human Rights Watch has received credible reports of real or suspected opposition members being killed, disappeared, arbitrarily arrested, threatened, and beaten, particularly in rural areas. Local media have also reported arrests of opposition members, accused of threatening the security of the state.

Little information has been released about several major security incidents during 2020. In February, there were reports of skirmishes between security forces and alleged “criminals” in western Bujumbura Rural province, as photos and videos circulated online showing detained people and dead bodies surrounded by police and local residents. After the elections, local civil society groups and media reported several attacks in provinces bordering neighboring Rwanda and Democratic Republic of Congo by unidentified armed men, often leading to civilian casualties. Authorities did not release information about the incidents.

Reports of arrests of scores of Kinyarwanda-speaking Banyamulenge asylum seekers and refugees from eastern Congo appeared to escalate after the Burundian interior and public security ministry’s spokesperson told the population in October to inform the authorities of anyone speaking Kinyarwanda.

The January 30 conviction after a flawed trial of four Iwacu journalists who were arrested while going to report on fighting between security forces and the rebel group RED-Tabara in October 2019 underscored the dangers of investigating security incidents. Their conviction was upheld on appeal in June.

In February, the trial of human rights defenders and journalists in exile began in their absence and without the presence of their lawyer.

Media were heavily restricted in their coverage of the elections. The 2018 amended press law and a new Code of Conduct for Media and Journalists in the election period require journalists to provide “balanced” information or face criminal prosecution, and prevented them from publishing information about the elections that did not come from the national electoral commission.

The Appeal Court’s confirmation of the 32-year sentence of human rights activist Germain Rukuki, a member of Action by Christians for the Abolition of Torture (ACAT), was overturned by the Supreme Court in June. Rukuki was convicted on trumped-up charges related to state security in April 2018. Nestor Nibitanga, an observer for the Association for the Protection of Human Rights and Detained Persons (APRODH), was sentenced to five years for “threatening state security” in August 2018.

The government continued exerting pressure on UN agencies and international nongovernmental organizations (NGOs) in Burundi to control their work and their ability to share information on the humanitarian situation in the country. Authorities passed several decrees creating recruitment committees and other mechanisms to enforce the application of ethnic quotas in the recruitment of local staff by foreign NGOs and ensure greater government oversight of their work.

The humanitarian situation in Burundi, one of the world’s poorest countries, was dire, with around 1.7 million people facing food insecurity, according to the UN Office for the Coordination of Humanitarian Affairs (OCHA).

In August, the foreign affairs minister wrote to the UN resident coordinator, requesting he share a note-verbale with all UN agencies and international NGOs in Burundi which sought to restrict the kind of data that could be collected in the country. The minister called on them to share a “positive, real and evolutive image” of the country; otherwise, only authorized data collection would be allowed.

The government’s response to the Covid-19 pandemic was marked by repression and misinformation. High-level government officials, including Nkurunziza and Ndayishimiye, downplayed the threat of the virus. Nkurunziza’s government refused to follow the World Health Organization (WHO) guidelines to prevent the spread of the virus, claiming Burundi was protected by God, and declared the WHO’s country director and three of its experts persona non grata on May 12. Medical workers and experts told Human Rights Watch they were concerned that suspected cases were not being transparently accounted for and that the public health authorities were failing to adequately respond to the pandemic.

On June 30, Ndayishimiye declared Covid-19 the country’s “worst enemy,” pledging to ramp up testing and lower the price of water and soap, marking a change in the government’s approach to the disease. In September, the health minister declared the Covid-19 epidemic in Burundi over, without providing data to substantiate the claim.

There are still over 300,000 Burundian refugees outside the country, many of whom fled in the aftermath of former president Nkurunziza’s decision to run for a third term in 2015. During the campaigns and since his election, Ndayishimiye repeatedly promised that political exiles and refugees could safely return to the country. Between September 2017 and 2020, almost 100,000 refugees returned to Burundi under the UN refugee agency-backed assisted voluntary repatriation program, most of whom returned from Tanzania. After the May 2020 elections, the UN refugee agency began facilitating returns from Rwanda, Namibia, and Congo.

Human Rights Watch received credible reports alleging that Tanzanian police arbitrarily arrested and forcibly disappeared Burundian refugees in Tanzania, some of whom were forcibly returned to Burundi. There were concerns about the voluntary repatriation program, following reports of repatriated refugees being the targets of attacks upon their return, and threatening statements by authorities about political exiles.

Burundi punishes consensual same-sex sexual relations between adults with up to two years in prison under Article 567 of the penal code. Article 29 of the Constitution of Burundi explicitly bans same-sex marriage, and Ndayishimiye has made disparaging comments about abortion and same-sex relationships.

During his inaugural speech, President Ndayishimiye promised to reform the judiciary and ensure that all government or other officials who commit offenses are held accountable. Since his election, there have been isolated cases of arrests and trials of ruling party youth league members and security forces accused of committing crimes.

The appointments of Prime Minister Alain Guillaume Bunyoni and Minister for the Interior, Community Development, and Public Security Gervais Ndirakobuca, both under international sanctions for their alleged role in violence in 2015, cast doubt over the new administration’s commitment to accountability and raises concerns about the possible interference with criminal investigations into past abuses.

The East African Community, whose election observation mission did not travel to Burundi amid the Covid-19 pandemic, in a May 26 statement praised the “peaceful and successful” elections process, saying that it was “domestically driven through [the country’s] own funding,” despite the forcible collection of funds to pay for the vote.

Burundi refused to cooperate with any international and regional human rights mechanism. The COI on Burundi was not given access to the country, despite repeated requests.

In January, the European Parliament called for tougher European Union measures and enhanced support to Burundian civil society and media given the worsening crackdown in the country.

Following the election of President Ndayishimiye, the EU has attempted to improve relations with Burundi, which is currently under restrictive EU measures, including sanctions against senior government officials and the suspension of direct budgetary support to the government.

Despite some divisions among EU member states, and amid lack of concrete human rights reforms on the ground, the EU eventually tabled a resolution at the UN Human Rights Council to renew the COI’s mandate for another year, which was adopted by the Human Rights Council in October.

The UN Security Council has been divided over whether to maintain Burundi on its agenda. In September, Bintou Keita, assistant secretary-general for Africa, and Huang Xia, special envoy of the secretary-general for the Great Lakes region, carried out an assessment mission to Burundi. Michel Kafando, the UN special envoy to Burundi who resigned in October 2019, was not replaced. The Security Council decided on December 4 to end Burundi-specific briefings, while continuing to raise the situation in Burundi during its biannual Great Lakes region and Central Africa meetings.

The International Criminal Court (ICC) continued investigations into crimes committed in Burundi since 2015.