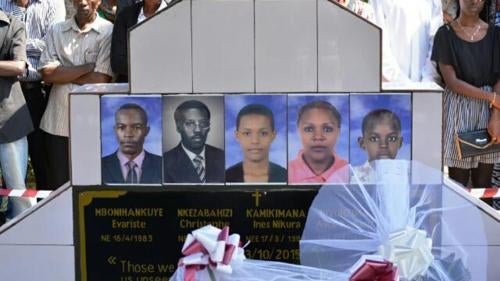 Burundi’s progress toward democracy and stability has suffered serious setbacks, as political upheaval and widespread killings by security forces and armed opposition groups gripped the country.

In April, demonstrations broke out in response to the news that President Pierre Nkurunziza would seek election for a third term. Police used excessive force and shot demonstrators indiscriminately, killing and injuring scores of people.

Around 200,000 Burundians fled the country, most to Tanzania and Rwanda. Dozens of journalists, civil society activists, and opposition party members remain in exile.

Killings escalated after July’s presidential election that returned Nkurunziza to power. Most opposition parties boycotted the election. Government forces, armed opposition groups, and unknown assailants killed more than 100 people in the second half of the year.

In late April, the announcement by the ruling National Council for the Defense of Democracy-Forces for the Defense of Democracy (CNDD-FDD) that Nkurunziza would stand for a third term ignited protests in the capital Bujumbura, and later in other locations. Many Burundians complained that the president’s third term violated a 2000 peace agreement that sets a maximum of two five-year presidential terms. Police suppressed the protests violently, shot dead dozens of demonstrators, and injured many others. 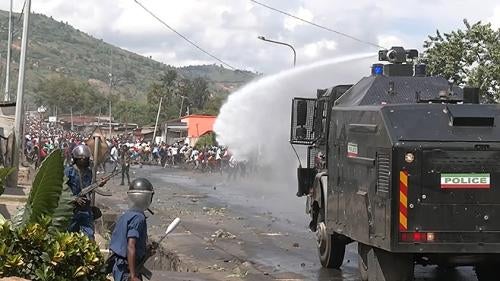 Following a failed coup d’état by a group of military officers on May 13, the government intensified its crackdown on protesters. Police arrested hundreds of people, including suspected opponents, many arbitrarily, and detained them for prolonged periods without trial.

Police and intelligence agents ill-treated or tortured scores of those arrested, in some cases making them stand on their heads, and beating them with electric cables while naked to force them to admit they were leaving the country to join an armed rebellion. Members of the ruling party’s youth league, known as Imbonerakure, also arrested and beat people, despite not having legal powers of arrest.

Attacks by protesters against the police prompted police to seal or raid some neighborhoods of the capital. Men in police uniforms then entered these areas, allegedly searching for weapons, and shot dead a number of unarmed residents, in some cases indiscriminately.

Senior ruling party officials used inflammatory and apparently threatening language in public speeches and statements. In a speech to local officials on October 29, Senate President Révérien Ndikuriyo repeatedly used the word “gukora,” which means “to work” in the Kirundi language. The same word was used to incite people to mass violence before and during the 1994 Rwandan genocide.

President Nkurunziza warned on November 2, that anyone who failed to hand over weapons by November 7 would be “punished in accordance with the anti-terrorist law and fought like enemies of the nation.” He told security forces they could use all means at their disposal to restore security. Search operations began on November 8.

While anti-Nkurunziza demonstrations were initially peaceful, some demonstrators resorted to violence, throwing stones and Molotov cocktails and shooting marbles with sling shots at the police. On May 7, demonstrators in Bujumbura killed an Imbonerakure  by throwing stones at his head and hitting him with clubs. They then put a tire around his body and burned him.

Government opponents in certain Bujumbura neighborhoods stepped up their violence after the July elections, throwing grenades at police patrols and attacking police stations. At least 26 police were killed and many others injured.

There were persistent reports of an armed rebellion, elements of which were believed to be based in Rwanda, others inside Burundi. Cross-border incursions led to clashes between these groups and the security forces, notably in Kayanza and Cibitoke provinces.

In August and September, unknown gunmen shot dead several high-profile people in Bujumbura, including Adolphe Nshimirimana, the former head of the intelligence services; Jean Bikomagu, former army chief-of-staff; and Patrice Gahungu, spokesperson for the Union for Peace and Development-Zigamibanga (UPD) opposition party, whose president, Zedi Feruzi, was killed in May.

Members of the opposition Movement for Solidarity and Democracy (MSD) and National Liberation Forces (FNL) parties were also killed, as were several members of the ruling CNDD-FDD, in what appeared to be reprisal attacks. Army Chief-of-Staff Prime Niyongabo escaped an attack on September 11. Some of his bodyguards were killed in the attack.

In the second half of the year, dead bodies were discovered on the streets of Bujumbura, and in other locations, on an almost daily basis. Some had been shot in the head. Others bore injuries or scars indicating they may have been tortured. Many victims remained unidentified.

On January 20, Bob Rugurika, director of the private station Radio publique africaine (RPA), was arrested, days after his radio station broadcast a series of reports about the September 2014 murder of three elderly Italian nuns in Bujumbura. He was charged with conspiracy to murder, violating confidentiality in criminal investigations, harboring a criminal, and failing to uphold “public solidarity.” The Court of Appeal ordered his release on bail on February 18.

In late April, soon after protests against Nkurunziza’s third-term bid started, the government closed RPA. It also stopped two other private stations, Radio Isanganiro and Radio Bonesha, from broadcasting outside the capital, disabled their telephone land lines, and prohibited all three stations from broadcasting live from demonstrations.

The day after the attempted coup d’état, on May 14, people presumed loyal to the president attacked the offices of RPA, Radio Bonesha, Radio Isanganiro, and Radio-Television Renaissance. Armed men in police uniforms threw a grenade in Radio Bonesha’s office and destroyed its broadcasting equipment. The pro-ruling party Radio Rema FM was also attacked. The government announced an investigation into these attacks, the results of which are not known. The radio stations remained off the air at time of writing.

The prosecutor general set up a commission of inquiry into the demonstrations. The commission’s report, published in August, described the protests as an “insurrectional movement.” It claimed the damage to the radio stations was the result of “mutineers who guarded the stations” and that the director of Radio Bonesha, Patrick Nduwimana, had asked insurgents and military putschists to destroy Radio Rema FM.

The report named 24 civil society activists and several opposition politicians as having participated in the “insurrection” and said casefiles had been opened against some of them. The commission failed to investigate the use of excessive force by police during demonstrations.

On August 3, an unknown gunman on a motorcycle shot leading human rights activist, Pierre Claver Mbonimpa, in the face, when he was in his car. Mbonimpa survived with serious injuries. An outspoken critic of government abuses, Mbonimpa, president of the Association for the Protection of Human Rights and Detained Persons (APRODH), had been arrested and detained for four months in 2014. Mbonimpa’s son-in-law, Pascal Nshimirimana, was shot dead outside his house in Bujumbura on October 9, and his son, Welly Nzitonda, was shot dead on November 6, after being stopped by the police.

On August 2, members of the intelligence services severely beat Esdras Ndikumana, correspondent for Radio France Internationale and Agence France-Presse, as he was taking photographs at the murder scene of former intelligence chief Nshimirimana.

Antoine Kaburahe, director of the independent newspaper Iwacu, was summoned to the prosecutor’s office in Bujumbura twice in November in connection with his alleged complicity in the May coup attempt.

On November 23, the interior minister suspended the activities of 10 Burundian civil society organizations, including APRODH, after the prosecutor general ordered their bank accounts to be frozen.

In late December 2014 and early January 2015, the Burundian National Defense Force and police, assisted by armed Imbonerakure, committed at least 47 extrajudicial executions following a clash with an armed opposition group in Cibitoke province. Cibitoke borders the Democratic Republic of Congo where some Burundian armed opposition groups are believed to operate. The victims were members of the armed group who had surrendered, following gun battles with the security forces. Police, military, or Imbonerakure then shot or beat many of them to death.

The prosecutor general set up a commission of inquiry to investigate these allegations, but the commission members failed to talk to key witnesses. Some local authorities intimidated witnesses, especially those who they believed had spoken to “foreigners”, and warned them not to talk about these events. The commission’s report, published in April, was deeply flawed and misrepresented information collected from some witnesses. It claimed that almost all the combatants died during the fighting, with the exception of three who were killed by policemen acting on their own initiative. It stated that these policemen were arrested.

Many governments and intergovernmental organizations, including the African Union (AU), the United Nations, and the European Union, expressed strong concern at the deteriorating human rights situation. Partly in response to the extrajudicial executions in Cibitoke, the United States and the Netherlands, as well as other European countries, suspended part of their assistance to the Burundian military and police.

The EU announced a review of its aid to Burundi in the framework of the Cotonou agreement. In September, the EU imposed sanctions on three senior police and intelligence officials and one opposition member who took part in the failed coup. In November, the US imposed sanctions on the minister of public security, the deputy director general of the police, and two leaders of the failed coup.

On November 12, the UN Security Council unanimously adopted a resolution strongly condemning human rights violations in Burundi, urging a rejection of violence, and calling for the resumption of dialogue. The UN High Commissioner for Human Rights also issued several strong statements of concern.

The UN Electoral Observation Mission in Burundi (MENUB) was set to withdraw by the end of the year. A team of the Office of the UN High Commissioner for Human Rights remained in place in Burundi, and the AU deployed human rights observers.  In September, the UN Human Rights Council unanimously agreed to consider the human rights situation in Burundi at its three main sessions in 2016.