Donate Now
Girls in nearly a third of African countries face significant barriers to education when they become pregnant. But this is changing. In 2019, the government of Niger adopted an order directing schools to allow married and/or pregnant girls to continue their studies and return after they have delivered/have given birth. Mariama Mamoudou Djibo is program director of Femmes, Actions et Développement (ONG FAD) Niger. She spoke with Human Rights Watch researcher Kaem Kapalata Machozi about this measure’s potential to change lives, and what other African countries can learn from Niger.

What normally happens when a girl becomes pregnant while she is a student in Niger?

Girls who continue with their education unencumbered after pregnancy are outliers. Our society frowns upon girls who become pregnant. When the pregnancy is apparent, she is forced to reveal the father of her child. The girl’s family then approaches the man and demands that he assumes financial responsibility for the girl and pregnancy. This often leads to a forced marriage, with no regard for the girl’s rights, wishes, or future. Sometimes the pregnancy is due to rape, but still, society encourages the man to marry the girl. This compounded trauma leaves a lasting effect on girls, most of whom are denied access to their education after pregnancy.

On the other hand, some girls who refuse to reveal who they are pregnant with are shunned by their families. Their families punish them by ignoring them or speaking harshly towards them. Some girls go to live with their aunts or family members who agree to take them in after their parents have rejected them. But in some unfortunate cases, the girls are put out on the streets and have to fend for themselves, leaving them vulnerable with little to no access to basic necessities. 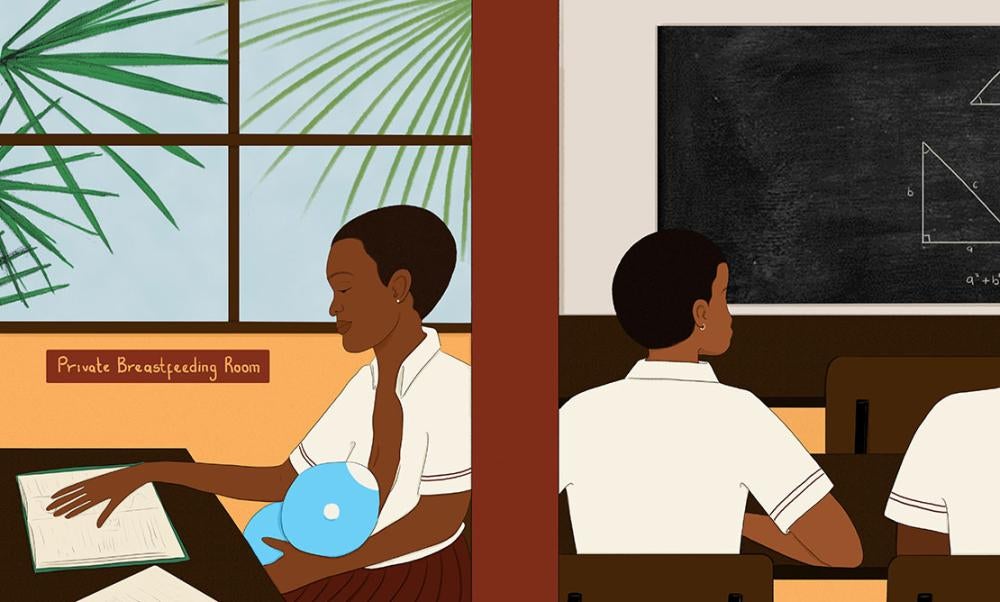 Empowering pregnant girls and adolescent mothers to stay in school.

Niger issued an order to ensure that all girls stay in school. How did this decree come to pass?

This change is a win for girls’ education. Why aren’t more pregnant teens and adolescent mothers staying in school?

The 2017 decree and the supplemental orders only represent the first step in this struggle. The government should go a step further to educate people around the country about the existence of this measure. Organizations and activists do not have enough funding or resources to reach all communities around the country. Girls’ rights can only be fully protected if the whole society is aware of the government’s new outlook. At the moment, only a small section of the society is aware of these texts.

How has the new measures affected communities who are aware about it?

Among the communities we work with, pregnant teens and adolescent mothers want to go to school. But cultural issues affect how communities respond to the call for access to girls’ education. Child marriage is a problem in Niger. Many have interpreted the measure as a rubber stamp for married pregnant teens to return to school. On the other hand, unmarried teens are still rejected by some schools and by their families. Clear messaging and advocacy from the government is key to changing these attitudes.

Schools must also make special considerations for pregnant teens. They need to welcome pregnant girls and encourage them to stay in school. School administrations should have counselling programs that support girls and do away with stigma in the school community.

Through these steps, families would also be encouraged to become more accepting to pregnant girls.

Niger took a positive step by issuing this decree. What can other African countries do to emulate this example?

Niger is not a rich country. But this measure was passed because the government prioritized girls’ education. Protecting girls’ schooling is not just the prerogative of rich countries, but all African countries should also center girls’ development through education.

This measure came about because of activists’ and nongovernmental organizations’ tireless advocacy for pregnant teens and adolescent mothers. I encourage more Africans to advocate to their governments to demand these protections from leaders. I understand how difficult it is to make a government change its priorities. But human rights belong to all of us, and we have a duty to keep on pushing our state institutions to protect important rights such as the right to education.