(Washington, DC) – Reproductive rights, including the right to access abortion, are grounded in internationally recognized human rights. Human Rights Watch released a new question-and-answer document that articulates the human rights imperative, guided by international law, to ensure access to abortion, which is critical to guaranteeing many fundamental human rights for women, girls, and pregnant people. 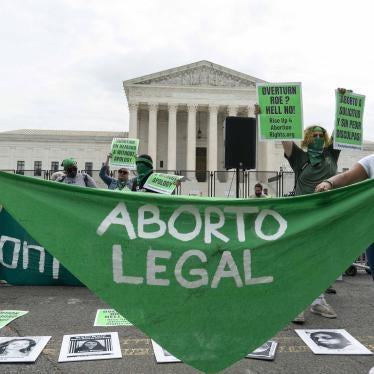 “Guaranteeing access to abortion is not only a public health imperative, it is a human rights imperative as well,” said Macarena Sáez, women’s rights director at Human Rights Watch. “Though more governments are taking steps to increase access to abortion, others are impeding or outright banning it, putting the rights of women, girls, and pregnant people at risk.”

The question-and-answer document addresses questions around the human rights impacts of restricted abortion access, the health consequences of unsafe abortions, and more.

Where safe and legal abortion services are restricted or not fully available, a number of human rights may be at risk, including the rights to life, to health, to information, to nondiscrimination and equality, to be free from cruel, inhuman and degrading treatment, to privacy, to decide the number and spacing of children, to liberty, to enjoy the benefits of scientific progress, and to freedom of conscience and religion.

Banning or restricting abortion services does not eliminate the need for abortion. Rather than lower abortion rates, restricting abortion access increases the risk of unsafe procedures and creates a danger of introducing criminal laws so that people are reported to the police or prosecuted for suspected abortions. These risks especially affect people living in poverty or who are otherwise subject to systemic discrimination, Human Rights Watch said.

In the question-and-answer document, Human Rights Watch details how, when abortion is restricted or banned, the worst impact is on girls and marginalized groups, including Black, Indigenous, and other people of color, people living in economic poverty, and sexual and gender minorities. |

The United States is a party to several international treaties that recognize the rights to life, to privacy and bodily autonomy and integrity, nondiscrimination, and freedom from cruel, inhuman or degrading treatment, among others.

Abortion is already inaccessible for many pregnant people in many parts of the US, inconsistent with the country’s international human rights obligations. By removing constitutional protection of the right to access legal abortion, the US will fall further out of line with its human rights obligations, leading to rights violations against many people.

The US already has the highest maternal mortality rate when compared with 10 similarly situated high-income countries, and Black women in the United States are more likely to die than white women from a pregnancy-related cause, according to the US Centers for Disease Control.

The US is out of step with the global trend of expanding abortion access. In recent years, Argentina, Chile, Colombia, Ireland, Mexico, South Korea, and Thailand, among others, have decriminalized abortion or loosened restrictions. Many of these countries relied on human rights commitments and arguments when making this change.

United Nations human rights treaty bodies regularly call on governments to decriminalize abortion in all cases, and to ensure access to safe, legal abortion at a minimum in certain circumstances.

Lack of access to safe, legal abortion can result in forced pregnancy, including among girls.