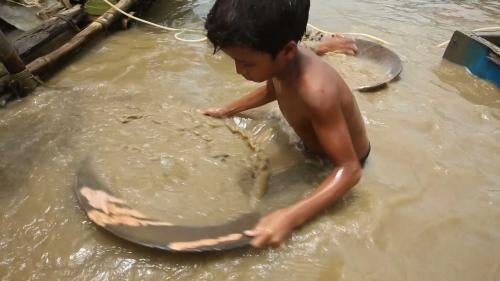 (Brussels) – The European Parliament should seize the chance to strengthen the accountability of companies operating in Europe by requiring them to respect human rights and the environment throughout their global supply chains, Human Rights Watch said today.

People all over the world face human rights abuses and environmental impacts linked to the way businesses operate, but the vast majority of companies globally do not investigate and address human rights abuses or environmental harm in their supply chains. From Ghana’s gold mines to garment factories in Asia and beyond, workers have suffered serious labor rights abuses, including hazardous work conditions, forced overtime, wage theft, forced labor, and child labor.

In addition, entire communities have suffered human rights impacts from companies’ toxic pollution, for example by palm oil factories in the Democratic Republic of Congo. Globally, everyone is threatened by the continued failure of fossil fuel companies – and the financial institutions that keep them afloat – to act decisively on the climate crisis. Neglect for human rights and the environment can have devastating consequences, as illustrated by the 2019 Brumadinho dam disaster, in which 259 people were killed when a mining dam in Brazil collapsed.

The Covid-19 pandemic has worsened the plight of workers in global supply chains. In the garment industry, scores of clothing brands and retailers have canceled orders without assuming financial responsibility, even when workers had finished making their products, resulting in dismissals and temporary layoffs. In the small-scale mining sector, activity has often been reduced or halted due to lockdowns and blocked trade routes. Where mining has continued, workers and affected communities have been exposed to increased human rights risks, including infection with Covid-19 and economic exploitation. In some small-scale mining areas, child labor is on the rise.

Under international rules, companies have a responsibility to conduct human rights and environmental due diligence to ensure that they do not cause or contribute to rights abuses in their supply chains, in line with the United Nations Guiding Principles on Business and Human Rights. “Due diligence” refers to a company’s process to identify, prevent, address, and remediate human rights and environmental impacts in its own operations and in its supply chains.

Yet, Human Rights Watch research in the garment, jewelry, and agricultural sectors has found that companies – including European companies – often do not carry out adequate human rights and environmental due diligence processes.

Human rights activists, environmental groups, and trade unions have been pushing for robust regulation of companies at the EU and globally. Kalpona Akter, founder and executive director of the Bangladesh Centre for Workers’ Solidarity, told Human Rights Watch: “The onset of the Covid-19 pandemic has exposed how workers in the global supply chains are at the receiving end of empty promises. A law governing the due diligence obligations of companies is important to protect human rights and workers’ rights and ensure that when businesses create jobs in other countries through their global supply chains, they create jobs with dignity.”

Farai Maguwu, director of the Zimbabwean Centre for Natural Resource Governance, said about the EU initiative: “We support any and every effort aimed at holding extractive industries accountable. Corporate impunity is posing an existential threat to people living in areas endowed with natural resources.”

Following a commitment in April by Commissioner Reynders to passing an EU law that would make human rights and environmental due diligence mandatory for companies operating in the EU, the European Parliament is preparing a report to request the European Commission to submit a formal legislative proposal in line with its recommendations. The Commission is conducting a public consultation to gather input from civil society, the private sector, and member states. Once the Commission offers a proposed law, the European Parliament and the EU’s 27 member states will have to agree on the text for it to come into force.

For the EU due diligence law to be effective, companies should be required to address human rights and environmental risks throughout their entire business chain, and publicly disclose information about the entities in the chain and the steps they have taken to fulfill their due diligence obligations. To be effective, the EU directive should carry consequences for noncompliance, including penalties, and create a civil course of action and access to judicial remedies.

The EU due diligence law should explicitly address business actions that contribute to the climate crisis. Companies – and financial institutions – should measure their direct and indirect greenhouse gas emissions and reduce them in line with the objectives of the Paris Agreement on climate change and the European Green Deal.

Human Rights Watch provided more detailed recommendations for the new EU due diligence legislation in a June 2020 letter to Commissioner Reynders and European Parliament members, and in a Q&A.

“Workers at the lowest rung of global supply chains often risk their lives and limbs in hazardous working conditions as companies ruthlessly pursue a race to the bottom,” Leicht said. “Binding EU law governing companies’ human rights and environmental due diligence obligations is urgently needed to protect workers and their communities.”