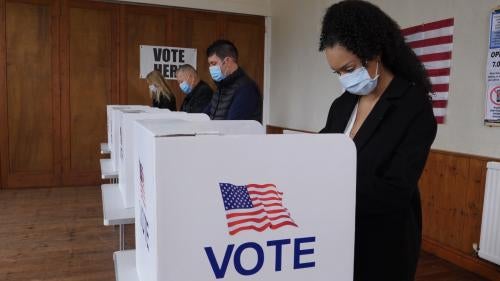 (Washington, DC, September 22, 2020) – Responses by election officials in the United States to the Covid-19 pandemic seriously impaired some people’s ability to vote in primary elections, Human Rights Watch said in a report released today. Election officials need to ensure that every method of voting allowed in their state is easy to access and use for all voters, so that there can be a credible US general election on November 3, 2020.

The 83-page report, “What Democracy Looks Like: Protecting Voting Rights in the US during the Covid-19 Pandemic,” examines changes that election officials made in response to the Covid-19 pandemic prior to the 2020 primaries in Arizona, Pennsylvania, South Carolina, and Wisconsin and their impact on the right to vote. Human Rights Watch recommended steps US election officials should take for the November election and beyond to prevent violations of voting rights, which during the primaries had discriminatory impacts on Black and Latinx people.

“During the 2020 US primaries, many voters faced closed polling places or long lines, or had to choose between their right to vote and their health,” said Alison Parker, US program managing director at Human Rights Watch and the report’s author. “State and local officials will need to make sure these restrictions on voter rights are not repeated in November and that voting options and their availability – including the numbers of polling stations – are greater, not fewer.”

In Wisconsin’s spring primaries, many citizens, particularly Black and Latinx people, could not vote in Milwaukee because they could not spare hours or were physically unable to stand in line, lacked transport, or feared exposure to the Covid-19 virus at the few and crowded polling places that remained open as officials adjusted to a shortage of poll workers. Closing polling places contradicts scientific recommendations on reducing crowds and lines during the pandemic.

Given the preference, according to studies, of many Black people for visual confirmation that their vote was cast by voting in person, poll closures and consolidation in Philadelphia County, Pennsylvania and in Richland County, South Carolina, may have had a disproportionate effect on their right to vote because they could not find polling locations, lacked transport, or were unable to wait in line.

“I was so upset,” said a 67-year-old woman living in Columbia, South Carolina whose normal polling place was closed, was turned away from the poll she was sent to, and was told, too late, that she needed to travel to yet a third polling place. “For the first time since I was 18 years old, I could not vote. It was horrible that night. I felt like they did not care if I voted or not.”

In the 2020 primaries, state and local officials also failed to take steps to overcome bureaucratic, linguistic, and other barriers to absentee voting or voting by mail. This prevented many citizens, including Black, Latinx, and Native American people, from voting at all.

A woman interviewed in Columbia, South Carolina, tried, but failed to vote absentee because she had health conditions that put her at high risk of Covid-19. She updated her address months in advance, called multiple times to reconcile the address, but did not receive her absentee ballot with the correct address in time to vote. “I worked hard to get my vote in [for the primary], but I failed to do so,” she said.

Since the primaries, Arizona and Wisconsin have taken steps to improve voter access. A bill is pending in the Pennsylvania legislature that would facilitate poll worker recruitment and the processing of ballots received by mail. A recent Pennsylvania Supreme Court decision extends the time for processing ballots by mail and increases the use of ballot drop boxes in the state. Nevertheless, authorities at all levels throughout the country should do more to ensure that all citizens are able to vote freely and without discrimination, Human Rights Watch said.

“Human Rights Watch’s findings make clear that US election officials made some bad decisions that had a discriminatory impact especially on Black and Latinx people,” said Derrick Johnson, president and CEO of the NAACP, an organization with a long record of fighting against racial discrimination in the US. “Looking forward, officials should be on notice that whatever their intentions, actions that have a discriminatory impact violate international human rights law.”

In recent months, countries such as South Korea and Indonesia have increased the number of polling locations to adapt to the Covid-19 pandemic. Election officials in the US should also increase the number of polling locations and use of secure drop boxes to accommodate voters who may want “in person” confirmation that their vote has been cast, Human Rights Watch said.

Election officials should also adopt measures to assist people likely to face problems in voting, Human Rights Watch said. Voters with disabilities and older voters, including those living in residential facilities, may need special accommodation like assistance with completing absentee ballots. Officials should ensure that people who have had contact with the criminal legal system and who also have the right to vote can do so. Given failures during recent primaries, officials should ensure that voters have an opportunity to fix a missing or mismatched signature on their ballot or other minor error in time to be counted.

Given United States census data indicating that people living in poverty are less likely to exercise their right to vote, officials need to take additional steps to give low-income people easy access to the ballot box. The announced moratorium on evictions may provide some needed protection, but election officials still need to do all they can to assist voters who may move or lack a stable address, Human Rights Watch said.

United States election officials also need to overcome the confusion experienced during the primaries and prompted by debates over funding for the US Postal Service, crucial for mail-in voting. This confusion makes it important for election officials to do all they can to ensure that voters are informed about how to navigate their local election system. Overcoming language obstacles is critical for Latinx and Native American voters, Human Rights Watch said.

Adjusting to current conditions and avoiding the mistakes of the 2020 primary season also mean that election officials may need more staff, resources, and time beyond election night to process a predicted increase in absentee and vote-by-mail ballots.

“The duty of election officials is to make voting easy for every eligible voter,” Parker said. “Election officials will need to overcome many challenges before election day and beyond to protect the right to vote and ensure credible US elections.”