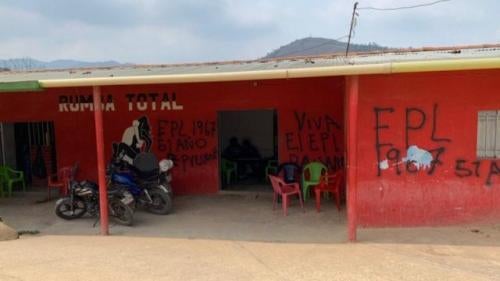 (Bogotá) – Armed groups have committed egregious abuses against Colombian and Venezuelan civilians as they fight for control in Catatumbo, northeastern Colombia, Human Rights Watch said in a report released today.

The 64-page report, “The War in Catatumbo: Abuses by Armed Groups Against Civilians Including Venezuelan Exiles in Northeastern Colombia,” documents killings, disappearances, sexual violence, recruitment of children as soldiers, and forced displacement by the National Liberation Army (ELN), Popular Liberation Army (EPL), and a group that emerged from the demobilized Revolutionary Armed Forces of Colombia (FARC). Armed groups use threats to gain control, including against community leaders and human rights defenders, some of whom have been killed. Venezuelans who fled the humanitarian emergency in their country are among the victims.

“As armed groups fight for the void left by the FARC in Catatumbo, hundreds of civilians have been caught in the conflict,” said José Miguel Vivanco, Americas director at Human Rights Watch. “Venezuelans who are fleeing the humanitarian emergency in their own country are being caught in this nexus of war and desperate flight.”

Violence and abuses have increased in Catatumbo since the FARC demobilized in 2017 as part of its peace accord with the government. The Colombian government is falling short on its human rights obligations to protect civilians from abuses and to provide victims with redress.

In April 2019, Human Rights Watch interviewed more than 80 people, including abuse victims, their relatives, community leaders, church representatives, human rights officials, local authorities, justice officials, and members of humanitarian and human rights organizations working in the area. Interviews were conducted in Catatumbo, as well as some in Cúcuta, the capital of North Santander province, and some by telephone.

Human Rights Watch also reviewed official reports and statistics, publications by nongovernmental and international organizations, and written testimony given to government officials by almost 500 victims of abuses committed in the context of the armed conflict. The total number of cases is most likely higher than that recorded by government authorities, given victims’ fear of retaliation by armed groups for exposing abuses, or Venezuelan victims’ fear of deportation.

“Those who are part of the conflict do not suffer what we, as the people in the countryside …, suffer,” said a teacher in a rural school who lost his foot when a landmine exploded just meters from the school grounds. “We are the ones paying for a conflict that they started.”

Limited immigration controls and better-paying jobs attract Venezuelans to the Catatumbo borderlands. At least 25,000 Venezuelans live in Catatumbo, according to the United Nations Office for the Coordination of Humanitarian Affairs (OCHA). Desperate and often undocumented Venezuelans have been among those forcibly displaced and killed, and Venezuelan children have been recruited as soldiers.

OCHA reported that 109 people it considered civilians were killed by armed groups in 2018 alone. Armed groups have killed nine human rights defenders and community leaders, according to investigations by Colombia’s Attorney General’s Office and the Office of the United Nations High Commissioner for Human Rights (OHCHR).

“Community leaders play a fundamental role to give voice to abuse victims and help reinstate the rule of law in remote areas of Colombia,” Vivanco said. “The Colombian government should increase its efforts to protect them and ensure that those responsible for these murders are held to account.”

Armed groups have been implicated in kidnappings and disappearances, as well as rape and other sexual violence.

Children as young as 12 have been forced to join an armed group after members threaten to kill them or their families, or they join for money. Human Rights Watch reviewed testimony in a dozen cases in which families fled after an armed group threatened or attempted to recruit a child.

Colombian authorities have thus far failed to ensure justice for abuses committed by armed groups. As of April 2019, there were over 770 cases related to murders that occurred in Catatumbo since 2017. There have been convictions in 61 cases. Only two armed group members have been charged with murder, according to the Attorney General’s Office. The office has not charged anyone for threats, recruitment of children as soldiers, or enforced disappearances, which, under Colombian law, may be committed by both state and private actors. Two armed group members have been charged for forced displacement, but no one has been convicted; 480 cases remain pending.

Assistance to the displaced, provided for under Colombian law, has been slow and insufficient, said humanitarian workers in the region. Hundreds of people have lived in temporary shelters improvised by communities. Some shelters lacked furniture or running water. Authorities have also failed to adequately address risks to human rights identified by the Human Rights Ombudsperson’s Office.

In October 2018, the Colombian government created a Rapid Deployment Force to increase the number of military officers in Catatumbo by 5,600. Residents, human rights officials, and humanitarian workers have reported abusive behavior by soldiers directed at civilians, including accusing them of being complicit with guerrilla groups and questioning them at military checkpoints, exposing them to retaliation by armed groups. In April 2019, a soldier killed a demobilized FARC member.

To comply with its obligations under international and Colombian law, the Colombian government should put in place human rights-respecting strategies for the military and police to protect civilians. It should provide further support to prosecutors investigating abuses by armed groups and seek international support to aid people who have been displaced. It should also carry out a comprehensive assessment of the number of Venezuelans living in Catatumbo and their needs, and ensure that all Venezuelans can work legally in Colombia, including in safer parts of the country.

“The government’s efforts to increase its presence in Catatumbo through deploying the military needs to go hand-in-hand with broader efforts – like support for criminal investigations and humanitarian assistance – to protect the rights of farmers and Venezuelan exiles there,” Vivanco said.

For selected cases documented by Human Rights Watch, see below.

Beatriz (pseudonym) was raped in mid-2017. That day, she was at her job as a cook for agricultural laborers. Her husband was working on the same farm. At around 5 p.m., a group of uniformed men, their faces hidden under balaclavas, arrived, shouting why “the fuck” hadn’t the couple left since they had been “warned.” They asked if anyone else was on the farm. Beatriz’s husband said no, to protect the other workers.

The guerrillas sent men to look. Four, who had the ELN logo on their clothes, stayed. Two of them sexually assaulted Beatriz as the others made her husband watch. Beatriz lost consciousness and woke up two hours later in her husband’s arms. They fled to a nearby city, and, she said, only reported the incident several months later because of the shame and psychological trauma.

Dalila (pseudonym) lived between two mountain ridges where armed groups operate. The groups often fight among themselves, she reported to authorities, and the walls of her house are full of holes from the shootouts. One afternoon in early 2018, three men arrived at her house. They were armed and wearing uniforms, but Dalila said she did not know to which group they belonged. They told her they were going to take her oldest children, who were 17 and 14. Dalila said she told them they would have to kill her first. The men said she had a few hours to leave. She sent her two sons to another municipality where her sister lived. Dalila went back to sell her animals and fled to a nearby city.

Alejandro Rodríguez (pseudonym), 34, is a primary teacher at a rural school in Catatumbo. Around 1 p.m. on February 5, 2019, Rodríguez went to look for a soccer ball that a student had kicked off school grounds, about 15 meters from where the students were playing. Rodríguez stepped on something that exploded, likely a landmine. Neighbors helped him get to the nearest town, several hours away. He lost his foot.

When we interviewed him in April, he said that nobody from the government had visited the area in the two months after the incident to see if there were other landmines near the school. He said he had moved to an urban area to receive medical treatment. In his rural community, he had heard shots nearly every day and children feared going to school, Rodríguez said.

Henry Pérez Ramírez, a 46-year-old community leader, went to check his crops early in the morning on January 26, 2016, and did not return, said his wife, Elibeth Murcia Castro. A man later told her that days before he had overheard Pérez Ramírez speaking on the phone with a FARC member. The FARC member had asked him questions about where the Colombian armed forces were operating and had requested a meeting on January 26.

Murcia Castro said Pérez Ramírez had previously received threats from the FARC member. She and her family desperately looked for him, and she filed complaints with judicial authorities and the Human Rights Ombudsperson’s Office, but his whereabouts remain unknown. “What I want the most is to find him,” she told us. “And not be like this, with this uncertainty, not knowing if he’s alive or if he’s dead.”

Enrique Pérez (pseudonym), 14, arrived with his mother in Catatumbo in February 2019. They left Trujillo state in Venezuela because, he said, his parents could no longer feed the family adequately. Some days, they only had one meal, and sometimes it was every other day. He had been a student in Venezuela but dropped out to work in the coca fields, under the blazing sun. At times, Venezuelans work only for a plate of food, he said. He said that he works alongside Colombian and Venezuelan children as young as 8, and that he would love to go back to school but must work.