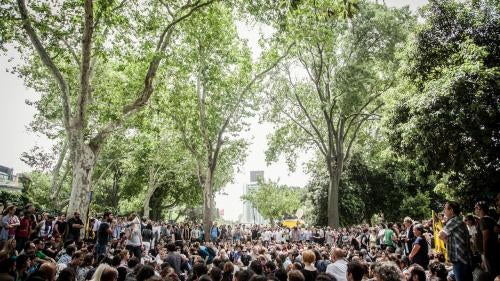 (Berlin) – The trial of 16 people accused of organizing and financing peaceful protests which began in Istanbul’s Gezi Park in 2013 is scheduled to begin on June 24, 2019, Human Rights Watch said today, releasing a short video about the case. The 16 are charged with attempting to overthrow the government and if convicted face a possible sentence of life in prison without parole.

“In the tension around the Istanbul election, people should not lose sight of the fact that 16 individuals engaged in peaceful civic activism, education, and the arts are about to stand trial for crimes for which the possible sentence is life in prison without parole,” said Hugh Williamson, Europe and Central Asia director at Human Rights Watch. “The Gezi trial exemplifies Turkey’s appalling record of bogus prosecutions and detention of people the government sees as its critics and enemies.”

Human Rights Watch previously published a detailed analysis of the indictment against the 16, showing that the prosecutor has provided absolutely no credible evidence of any criminal activity in the hundreds of intercepted phone calls, financial reports, travel records, and other material presented to justify the charges against them.

The Gezi protests started on May 29, 2013, after police violently dispersed a peaceful sit–in over the government’s plans to redevelop the area around Taksim square, including eliminating the green space in Gezi Park. Over the following days, the repeated and excessive use of teargas and water cannons by the police to disperse protesters in Taksim Square caused the anti–government protests to grow and to spread to cities throughout Turkey, with more than a million people taking to the streets.

“An examination of the indictment shows that the actual purpose of the Gezi prosecution is to silence and punish the defendants for their legitimate and entirely peaceful civic activities and work,” Williamson said. “The prosecutor should drop the charges, and Kavala and Aksakoğlu should be freed immediately.”