(Moscow) – A Russian court on February 6, 2019 convicted Dennis Christensen, a Jehovah’s Witness adherent and Danish citizen, on extremism charges for practicing his faith, Human Rights Watch said today. The court sentenced Christensen to six years in prison. The conviction is a blatant violation of the rights to religious freedom and expression. Russian authorities should immediately move to set aside the conviction and free Christensen.

“The verdict against Denis Christensen is a disgrace,” said Rachel Denber, deputy Europe and Central Asia director at Human Rights Watch. “It’s shocking that in post-Soviet Russia authorities are putting people through the ordeal of a criminal investigation and prison for nothing more than peacefully practicing their faith.”

Christensen, 47, had been in pretrial custody for 20 months, since his arrest in May 2017. His lawyer told Human Rights Watch that he will appeal.

In 2016, a local court banned the Orel Jehovah’s Witness organization as an “extremist religious organization.”

Police in Orel arrested Christensen, who has had a Russian residence permit since 2000, on May 25, 2017, during a raid by riot police on a Jehovah’s Witness worship service, during which Christensen had given a sermon. He was not on the staff of the Jehovah’s Witness organization but had unlocked the building where the members had gathered. 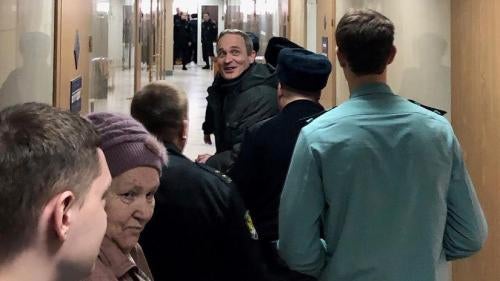 Authorities charged Christensen with “organizing activities of a religious organization that has been declared extremist” under article 282.2(1) of the Russian Criminal Code. The charge sheet, which Human Rights Watch reviewed, states that he was “actively involved in organizational work aimed at continuing the unlawful activities of the [banned Orel Jehovah’s Witness organization].”

Christensen’s lawyer told Human Rights Watch that the charges stem from Christensen’s actions on May 25 and from two previous incidents, in February 2017, when Christensen participated in discussions about a religious publication. They are also linked to Christensen’s role in organizing worshipers to help with the upkeep of their place of worship before the court ruling banning the organization entered into force in July 2017, and to persuading several other people to worship with Jehovah’s Witnesses.

Evidence at trial included testimony by a secret witness who, the Jehovah’s Witness organization said, claimed that Christensen was a key Jehovah’s Witness leader in Orel. During the trial, Christensen said he knew the “secret witness” and identified him as religious studies graduate and specialist in non-Orthodox “heresies.” However, the court barred the defense from including questions about his identity, even though they might have been material to challenging his testimony. Other evidence included, during a closed court hearing, transcripts from tapped phone calls between Christensen and other worshipers, and also witnesses who described the process of upkeep of the courtyard, such as shoveling snow, at the place of worship.

Twenty-two Jehovah’s Witnesses remain in custody in Russia, awaiting trial on extremism charges, and 25 are under house arrest. Law enforcement officers have carried out hundreds of searches, raids, interrogations, and other acts of harassment and persecution. The most recent wave took place on January 20, in Sakhalin, in Russia’s Far East, where police searched several homes and interrogated Jehovah’s Witnesses.

The trial of Sergey Skrynnikov, another Jehovah’s Witness worshipper in Orel, is also currently under way. On December 27, 2018, a court in Kabardino-Balkaria convicted Arkady Akopyan, 70, on extremism charges for allegedly getting people to distribute “extremist” Jehovah’s Witness literature. The court sentenced Akopyan to 120 hours of community service.

In a December meeting of Russia’s Presidential Human Rights Council, in response to a question about the prosecution of Jehovah’s Witnesses, President Vladimir Putin said that people of different faiths should be treated equally. He also said, “We need to consider the society and country we live in. But in no way does this mean that we should treat people from other religious persuasions as [from] destructive or terrorist organizations. This is utter nonsense and we need to get to the bottom of it.”

Russia, as a member of the Council of Europe and a party to the European Convention on Human Rights, is obligated to protect the rights to freedom of religion and association. The government has previously been found to be in violation of the European Convention for actions taken through the courts to dissolve communities of Jehovah’s Witnesses (Jehovah’s Witnesses of Moscow v. Russia, application no. 302/02).

The case against Christensen and the raids against Jehovah’s Witness adherents violate the right to freedom of religion, denying them the right to worship, and cannot be justified as either a necessary or proportionate measure to protect public safety or public order, Human Rights Watch said. Christensen has filed a complaint with the European Court of Human Rights alleging, among other things, that his arrest constitutes unlawful interference with his right to freedom of religion.

“Prosecuting Jehovah’s Witnesses on extremism charges is a serious human rights violation,” Denber said. “It’s absurd that Russian authorities are wasting taxpayer money on things like figuring out who shoveled snow in the congregation’s courtyard.”