Donate Now
Last year was a nightmare for Ariana Granadillo, a 21-year-old medical student who moved from Río Chiquito, a rural community in Monagas state, to Caracas to do an internship at a hospital. It was not (only) because the humanitarian crisis is making it harder and harder for doctors to treat patients. It was because she stayed at the home of a family member, a military officer, who lived close to the hospital – and, as it turned out, is being investigated by the Venezuelan government for alleged conspiracy.

In February, agents from the General Directorate of Military Counterintelligence (DGCIM) took her away. In detention, officers taped folders to her head to block her vision, beat her, and touched various parts of her body, demanding to be told the home owner’s whereabouts. She was released two days later without explanation.

In May, DGCIM agents detained Granadillo again, without a judicial order, this time with her parents, at their home in Miranda state. The authorities held them incommunicado for a week, not confirming their whereabouts to Foro Penal lawyers, who took on the case. 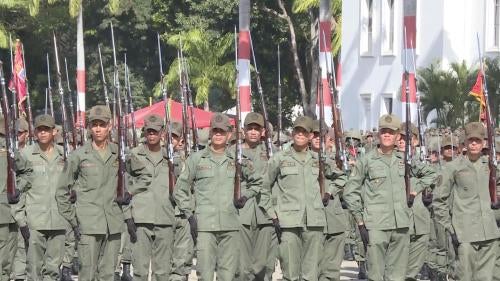 Granadillo says that the agents abused her to compel her to disclose the home owner’s whereabouts. They placed a bag over her head, tied her hands behind her back, and held her legs. When Granadillo told them she did not have any information to provide, she says, they held a bag over head until she nearly lost consciousness. They released Granadillo and her parents a week later without charges.

In June, investigative police officers took her off a bus. Granadillo was first held in a prison, then transferred to military intelligence headquarters in Caracas.

The following month, she was taken before a military court and charged with instigating rebellion, Foro Penal said. She stands accused of having phone conversations with her relative’s wife and receiving money from her. Granadillo told her lawyer that she had regular contact via phone with the wife while she lived in her home and the only money she got from her was for expenses to care for the owners’ dogs.

She was conditionally released, but cannot leave the country, and is required to check in with the court every eight days.

Granadillo is not the only family member of suspects accused of plotting against the government who have been detained and subjected to ill-treatment in Venezuela.

In a recent report by Human Rights Watch and Foro Penal, we analyzed information about cases of 32 people. We found that not only are intelligence agents detaining and torturing members of the military who are suspected of fomenting rebellion, but in some cases, they are also going after their families or other civilians when they can’t find the suspects.

In most cases, members of DGCIM or the Bolivarian National Intelligence Service (SEBIN) carried out the arrests. Victims include military officers of various ranks accused of plotting against the government and civilians accused of collaborating with Oscar Pérez, the rogue police official who was killed after throwing an alleged grenade from a helicopter to the Supreme Court building in Caracas after calling on the Venezuelan people to rebel against the government. In some cases, family members, including the son, the mother, the father, or the partner of suspects were detained to find out the whereabouts of the alleged plotters.

Intelligence agents subjected several detainees, including some of the family members, to physical and psychological abuse. They were brutally beaten, asphyxiated, the soles of their feet cut with razor blades, given electric shocks, deprived of food, forbidden to go to the bathroom, and even threatened with death. Several detainees did not have access to their families or lawyers for days. During their detention in prisons or military intelligence headquarters, they did not have access to adequate medical treatment.

They are accused of crimes that include “treason” and “instigating rebellion.” Lawyers representing them, who had access to judicial files and hearings in these cases including some prosecutions of civilians in military courts, said the charges were fabricated and not supported by any real evidence. Human Rights Watch asked the Venezuelan government to describe the actions on which the charges were based, and what evidence it had against suspects in these cases, but received no response.

These are not isolated cases. In fact, they are part of a pattern of widespread abuses by Venezuelan security forces that we have documented since 2014, including thousands of people arrested, hundreds of cases of cruel, inhuman, or degrading treatment against real and imagined government opponents, and at least 31 cases of torture.

Impunity for these abuses in Venezuela is deliberate, so it is impossible for Granadillo and others to find justice at home. In a context in which those responsible for these human rights abuses are more likely to be rewarded than brought to justice in Venezuela, it is critical to explore avenues to hold them accountable abroad.