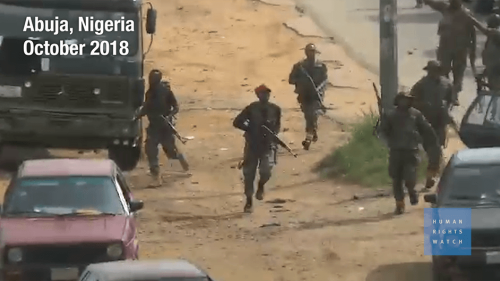 (Abuja) – Nigerian authorities have failed to ensure justice for the killings of hundreds of members of the Shia Islamic Movement of Nigeria (IMN) since 2015, Human Rights Watch said today in releasing a video of security forces’ violent crackdowns against members of the IMN.

On December 12, 2015, the Nigeria army used disproportionate force against the group’s street procession in Zaria, Kaduna State in northwest Nigeria to clear a route for the army chief’s convoy. In an ensuing three-day violent crackdown, the army killed 347 members of the group and arrested hundreds more, including the group’s leader, Sheikh Ibrahim El Zakzaky, and his wife, Ibraheemat.

Representatives of the group allege that subsequent crackdowns on the group’s activities and protests in Kaduna, Kano, Katsina, Yobe, Plateau, Sokoto, and Abuja, the federal capital, have resulted in the death of at least 110 people.

“The repression against the IMN Shia Muslim group by government security forces risks creating grievances that could worsen Nigeria’s already precarious security situation,” said Anietie Ewang, Nigeria researcher at Human Rights Watch. “The increasing spate of protests by the group is a cry for justice that authorities would do well to heed.”

The authorities should end impunity for the disproportionately violent Zaria attacks, carry out a speedy and independent investigation into subsequent crackdowns on protests, and hold anyone found responsible for using unlawful force to account.

In September 2016, a Kaduna State Judicial Commission of Inquiry recommended prosecuting soldiers involved in the Zaria killings. State prosecutors ignored that recommendation but brought charges against 177 members of the group in the killing of Corporal Dan Kaduna Yakubu, the only military casualty in the episode.

The lawyer for the defendants, Maxwell Kyon, told Human Rights Watch in June 2018 that defendants with severe gunshot wounds were denied medical care by prison authorities, resulting in the deaths of three of them in custody.

In July, after the defendants spent over two years in detention, the court discharged and acquitted 87 of them because the prosecution could not substantiate the charges. The trial of the 90 others is ongoing.

The commission also recommended that Sheikh El Zakzaky should bear responsibility for failing to call his followers to order when authorities asked him to. The government refused to obey a December 2016 Abuja High Court order for his release and payment of compensation for the destruction of his home. The Sheikh and his wife were charged before a Kaduna high court in April 2018 with aiding and abetting murder, among other offenses. The court ordered them detained by the Department of State Security, pending their trial, set for 2019.

According to a media report, the police arrested another 115 members of the group during a protest in Abuja to demand El Zakzaky’s release in April. On October 27, soldiers shot into a gathering of the movement’s members in Zuba, a major bus terminal on the highway northwest of Abuja, leaving at least six people dead. On October 29, soldiers at a military checkpoint shot at the group’s religious procession at Karu, northeast of Abuja, killing at least 21 people. On October 30, the police used teargas and live ammunition to stop the group’s procession into the Abuja city center and arrested 400 members, 120 of whom have been charged with various offenses.

In statements released on October 28 and 29, the Nigerian army admitted that soldiers shot and killed three members of the group in Zuba, saying they had blocked the road and attempted to steal military equipment the troops were escorting from Abuja to the Army Central Ammunition Depot in Kaduna. The statement also said that soldiers killed three other members of the group after protesters threw fuel bottles, large stones, and other dangerous objects that injured four soldiers at the Karu checkpoint.

The Islamic movement, in a statement, rejected the army’s claims, countering that soldiers killed 42 of their members without provocation.

A spokesman for the group, Abdullahi Muhammad Musa, who took part in the Karu procession, told Human Rights Watch that though the soldiers initially fired warning shots to disperse the procession, they soon began shooting directly at protesters as they tried to flee.

Human Rights Watch documented 21 dead bodies with gunshot injuries and interviewed witnesses in Karu after the shootings on October 29. The group’s members said they kept the bodies at home, preserving them with blocks of ice to prevent soldiers from burying them secretly to distort the death toll.

A senior medical officer at the Federal Medical Center in the town of Keffi told Human Rights Watch that four injured victims of the Karu incident had been treated there. The doctor said that one woman’s hand was amputated because of gunshot wounds, another had gunshot wounds to her right leg, and two men had been shot in the head.
The African Commission on Human and Peoples’ Rights General Comment on the Right to Life states that firearms should never be used simply to disperse an assembly and prohibits intentional lethal use of force by law enforcement officials, unless it is strictly unavoidable in order to protect life and all other means are insufficient to achieve that objective.

Any unnecessary use of force, especially lethal force, by security forces violates Nigeria’s obligations under international law, including the African Charter on Human and Peoples’ Rights, as well as national constitutional guarantees of the rights to life, and freedom of religion, peaceful assembly, and movement. The Nigerian army has yet to respond to a Human Rights Watch request for comments on the allegations.

“Any unlawful use of violent force against processions and protesters is highly likely to be counterproductive, as well as a crime,” Ewang said. “International partners providing assistance to the Nigerian military should press authorities to respect those rights and ensure that anyone responsible for unlawful violence and for killing Islamic Movement members faces justice in an open and fair trial.”