We’ve been here before. Saudi Arabia has a sordid track record of announcing formal mechanisms to look into deaths of civilians at the hands of its own officers which have utterly failed to credibly investigate those deaths. Observors of the Jamal Khashoggi investigation can draw important lessons from that history. And those concerned about war crimes in Yemen can draw insight from the Khashoggi affair.

Each victim of an unlawful Saudi coalition strike in Yemen is as worthy of concern as a Washington Post columnist. A groom and his wedding party. A child locked in jail. Villagers digging a well. Crowds shopping at a market. All killed or wounded in bombings by the Saudi-led coalition.

None of these apparent war crimes in Yemen were able to provoke the type of international outrage that the murder of Khashoggi has these past few weeks. Under an intense spotlight and external pressures, on October 20, Saudi officials finally admitted that Khashoggi died in its Istanbul consulate after weeks of repeatedly lying and obfuscating about his fate.

The astonishing response to his murder might make one think that Saudi officials involved in egregious rights abuses could finally pay some price for the crimes they’ve committed at home and abroad. And that the outrage over Khashoggi will galvanize the kingdom’s Western allies to demand accountability in some fashion that four years of atrocities in Yemen have not.

But President Donald Trump, who has warmed to many autocrats around the world, after days of calling on Saudi Arabia to investigate itself said he found Saudi Arabia’s explanation of Khashoggi’s death credible, telling reporters, “I think we’re getting close to solving a big problem.”

That’s not just the Saudi playbook. It’s also the one followed by the Americans.

For years, the Saudi-led coalition—armed and assisted by the United States—has killed and wounded thousands of civilians in Yemen, leaving a trail of death, destruction, and broken lives. When US officials are questioned about alleged coalition violations of the laws of war – from bombing a crowded funeral hall to destroying a bus, killing 26 young boys – they tend to follow a similar gameplan: Express concern. Call on the coalition to investigate. Laud the coalition when it does investigate, however weak the findings. Note any promise to investigate further or pay redress. Quietly let those promises disappear as soon as the international and any domestic political pressure recedes. 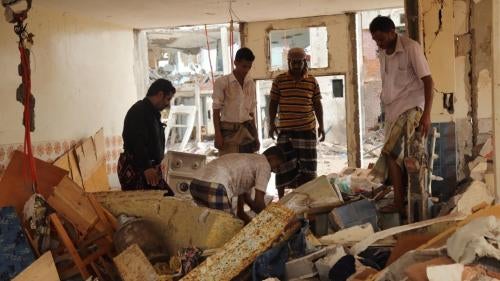 The Saudi-led coalition began its military operations against the Houthis, an armed group from northern Yemen, in March 2015, after the Houthis took over much of the country. Coalition airstrikes have destroyed vital civilian infrastructure in an already deeply impoverished country. They have hit hospitals, markets and factories in a place where the health system and economy have all but collapsed and the population is on the brink of famine. These attacks have killed and crippled civilians already trying to survive rising fuel prices, extreme food shortages, and the spread of cholera and other deadly diseases.

Through it all, the US has refueled coalition aircraft on bombing missions, provided tactical intelligence, and sold billions of dollars in arms to Saudi Arabia, risking complicity in coalition war crimes.

In the face of mounting global pressure on Saudi Arabia regarding the way it was waging war in Yemen, the coalition established an investigative body—the Joint Incidents Assessment Team (JIAT). Since that time, the coalition’s allies, including the United States, has repeatedly pointed to the existence of JIAT as evidence that the coalition was serious about minimizing civilian harm.

Human Rights Watch comprehensively tested those claims, analyzing the work of the body, which was tasked with assessing “claims and accidents” over the last two years. We found that it continued to exhibit the same fundamental failings in 2018 as it had in 2016. The vast majority of its public incident reports absolved the coalition of legal fault, obfuscated which countries’ forces might be responsible, refused to provide even rough estimates of civilian harm, and failed to offer a thorough laws-of-war analysis, leading to highly dubious conclusions.

JIAT has recommended that the coalition pay some form of assistance to victims of more than a dozen attacks, some carried out years ago. Even in these cases, JIAT often blamed technical or unintentional errors (once, even the weather), rather than finding any real fault. One man whose relatives were killed and 15-year-old son wounded in one of these attacks told us: “I sold everything to care for the wounded from my family.… All the money spent in hospitals.” He said he’d received nothing. Another: “The coalition said ‘Oh, we are going to pay,’ but who got paid? I don’t know who got paid.”

It remains unclear what, if any, authority JIAT has to compel coalition members to take up its recommendations to provide or ensure accountability.

In his certification to Congress allowing the continuation of US refueling to coalition aircraft, Secretary of State Mike Pompeo praised the coalition for announcing that it would hold those responsible for the recent bus attack to account. There’s no reason to think this will happen. When the coalition bombed a funeral hall in Sanaa in late 2016, killing and wounding hundreds of people, global pressure pushed the coalition to admit responsibility, apologize, and promise to take further action. Two years on, it has blamed Yemeni officers but taken no evident action against coalition forces involved. There is no evidence that any member of the coalition, including Saudi Arabia, has taken on investigating the role of their forces in potential war crimes, let alone begun prosecutions of those responsible as the laws of war require.

JIAT, instead of operating as a genuine investigative body, has served as a smoke-screen. The United States has used the guise of this body’s investigations as an excuse to continue selling weapons in the face of countless war crimes. Even the Saudi state news agency seems to see the body’s findings to be more about defending the coalition and refuting human rights reports than about credibly investigating.

Some examples of recent news release headlines: “Spokesman of JIAT in Yemen Refutes Claims…” “JIAT Confirms Soundness of Procedures Followed by Coalition Forces…” “Spokesman for JIAT confirms the Procedures of Coalition Forces Military Operations in Yemen Carried Out in Accordance with Int'l Humanitarian Law and its Customary Rules,” and “JIAT is Independent. …”

Saudi Arabia has failed for years to credibly investigate its own alleged wrongdoings in Yemen, and seemingly set up faux investigations to cover its tracks. US officials have every reason to know that. Relying on Saudi Arabia to investigate the death of Jamal Khashoggi or any of the many atrocities in Yemen appears more an attempt to ignore terrible acts than an effort to find out what happened.

With President Donald Trump making clear he intends to help shield Saudi Arabia from accountability as much as he can, Congress should step up and urgently push Riyadh to take real, concrete steps: Such as cooperating with repeated calls for a UN investigation into Khashoggi’s death; releasing the women’s rights defenders it continues to detain; setting up an immediate and effective redress system for Yemeni civilians; and beginning to prosecute those credibly implicated in war crimes.

Congress should demand transparency on these steps so it can monitor, and it should suspend arms sales and logistical and maintenance support for weapon systems until genuine progess is made. Anything else will appear a strategy to allow for attention to wane so business—and abuse—can continue as usual.