For months now, United Kingdom Foreign Secretary Philip Hammond has denied that violations of the laws of war are being committed by the UK’s ally, Saudi Arabia, through the Saudi-led coalition’s bombing campaign against the Houthis in Yemen. And he’s repeated these claims despite documentation from international human rights organizations - shared with the UK Foreign Office – detailing multiple cases of such violations. For example, Human Rights Watch has identified 36 unlawful airstrikes carried out by the coalition, and has gathered the names of least 500 civilians killed in those strikes.

But our research is now powerfully reinforced by a United Nations Panel of Experts report on Yemen, the most comprehensive assessment so far of the conduct of the warring parties. The report flatly contradicts British ministers’ claims, and finds that the coalition has “conducted airstrikes targeting civilians and civilian objects, in violation of international humanitarian law,” including refugee camps, weddings, buses, residential areas, medical facilities, schools, mosques, markets, factories, an airport and a port.

Faced with this new, substantial and damning body of evidence, the UK government can no longer deny Saudi Arabia’s serious abuses in Yemen.  A major shift in approach is needed.

Firstly, the UK should immediately halt the transfer of any weapons and military equipment to Saudi Arabia and other coalition states that have been used to commit the documented violations. Despite widespread violations by the Saudi-led coalition, more than £1 billion worth of bombs, missiles and rockets were licensed by the UK authorities for export to Saudi Arabia over just three months last summer.

Secondly, the UK should end its disingenuous stance on investigations. Hammond has repeatedly said he backs proper investigations of alleged laws-of-war violations. But there’s simply no evidence that either the UK or the coalition have conducted any. Moreover, when the UK actually had the chance to support a credible investigation into violations in Yemen proposed at the UN Human Rights Council last year, it failed to support it.

To advance the prospects of real accountability, an international and fully independent investigation into violations committed by all sides to the Yemen conflict is urgently needed.  The UK should pledge to support one immediately. 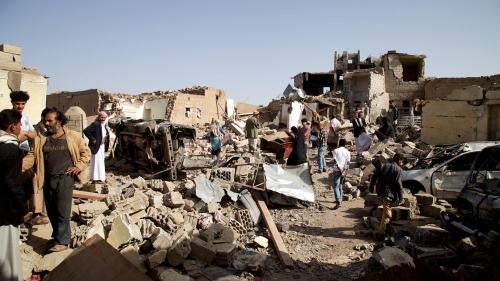