(Moscow) – The government’s response to a decade-long insurgency in Dagestan, a southern Russian republic, has been marked by serious human rights violations, Human Rights Watch said in a report released today. Insurgents also have attacked civilians.

The 97-page report, “‘Invisible War’: Russia’s Abusive Response to the Dagestan Insurgency,” and an accompanying video document human rights violations in counterinsurgency efforts as well as crimes by insurgents in Dagestan from 2012 through 2014. The abuses are set against a background in which authorities treat adherents of Salafism, a fundamentalist interpretation of Sunni Islam that is increasingly popular in Dagestan, as criminal suspects despite the absence of any grounds to suspect them of a specific offense. 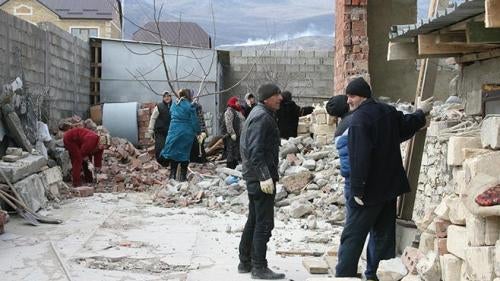 Human Rights Watch interviewed close to 80 people in Dagestan from 2012 through 2015, including victims of abuse or their relatives, lawyers, police and government officials, human rights defenders, and journalists.

Police put Salafis on special watch lists, commonly called “Wahhabi registration” lists, as local authorities often refer to Salafism as “Wahhabism,” a term that they use with pejorative connotations. They frequently detain and question Salafis for no specific reason, repeatedly photograph and fingerprint them, and in some cases carry out forced DNA sampling.

They [police] … hold you there asking you the same set of questions: where are you going, for which purpose, how do you feel about Wahhabism. On one occasion, an officer kept pressing me, ‘So, how come you aren’t in the woods yet? …why won’t you join them [insurgents]?’ It feels like they’re actually trying to push me out, make me run for the forest. They aren’t letting me have a normal life. And it’s the same for many others.

Human Rights Watch also detailed several counterinsurgency operations that extensively destroyed or damaged civilian property and for which the owners have not received adequate compensation – none at all in some cases.

In 2013 security officials looted and destroyed a number of homes and businesses in the village of Gimry during a 10-day period in which the security forces forced most residents to evacuate the village. The authorities barred reporters and human rights defenders from entering the village for weeks afterward.

During a protracted operation in the village of Vremenny in 2014, security forces rounded up hundreds of people for identification checks and questioning, eventually forced the entire population to leave the village, and destroyed or severely damaged dozens of houses.

“Counterinsurgency operations may well be warranted to protect the public, but what is never warranted is for security forces to conduct these operations without regard for human rights standards,” Lokshina said.

Human Rights Watch found that authorities in some cases used excessive force in detaining suspects, forcibly disappeared people, or held them incommunicado in undisclosed locations without access to family or lawyers. In some of these cases, police beat suspects to compel them to confess or to provide information. Local officials and security forces frequently place serious obstacles in the way of lawyers and human rights advocates who defend people targeted in counterinsurgency efforts and journalists who investigate the issues, and in some cases have threatened their lives and well-being.

Insurgent tactics in Dagestan have ranged from attacks on military and police personnel to assassinations of officials to indiscriminate attacks on civilians. Human Rights Watch documented two cases of suicide bombings in which civilians were injured and rescue workers were targeted, and the killings, presumably by insurgents, of two imams who criticized the militant Islamic underground.

The Russian government should immediately stop using abusive tactics in Dagestan. The authorities should foster a favorable climate for journalists, lawyers, and human rights defenders to do their work in the region, Human Rights Watch said.

“Insurgent attacks on civilians, public officials, and police are serious crimes, and those who commit them should be brought to justice,” Lokshina said. “But the Russian government can’t invoke its duty to prevent and punish insurgent attacks to justify violating people’s rights.”