The hands of Mamadou, a 14-year-old polio survivor, are smaller than my 2-year-old daughter’s. Every time we see each other, since we first met in June last year, we play the same game: he puts his tiny hand in mine, and counts to ten10, first in French, then in Arabic, then in his native language, Mbororo.

But when I visited Mamadou this week in the dismal displacement camp in Yaloke, 160 kilometers north of the capital Bangui, it was clear something was wrong. Mamadou, a Muslim Peuhl, had a rattling cough and could barely sit upright. His father was in despair, saying that the nearby hospital did not have the medicine to treat his gravely ill son. 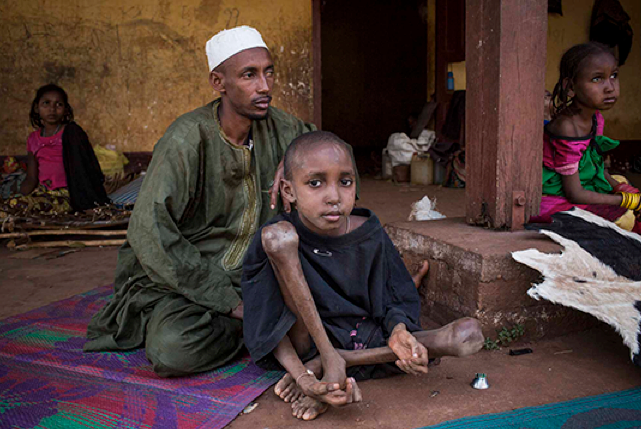 Getting Mamadou to another hospital in Bossemptele, just 70 kilometers away, was challenging. Thousands of Muslims in western parts of the Central African Republic were evacuated to neighbouring countries in early 2014 by African and French peacekeepers. But in April 2014 the country’s transitional government opposed any further evacuations without their consent for fear of being seen as assisting ethnic cleansing. As a result, thousands of Muslims were left trapped in enclaves dotted around western parts of the country, blocked from fleeing to safety in Cameroon and other countries and unable to leave the vicinity of the enclaves for fear of being brutally attacked by anti-balaka militias.

United Nations peacekeepers, who took over responsibility for peacekeeping from the African Union in September 2014, applied the government’s decision. The peacekeepers provide no security to help Muslims leave and, in the Yaloke enclave, go even further and block Muslims from fleeing abroad, using force to stop them boarding convoys of commercial trucks heading to Cameroon. The convoys are for many Muslims their only and best route to safety.

After much pleading and with a letter from the Bossemptele hospital explaining the urgency of his medical condition, Mamadou and his mother were permitted to go to the hospital, where he was diagnosed with an advanced pulmonary infection and given the antibiotics which saved his life. 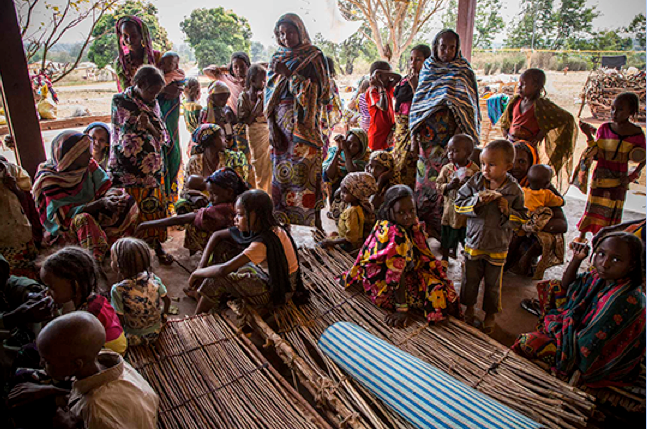 But the suffering of the estimated 500 Peuhl forced to remain in the Yaloke enclave does not end with Mamadou’s recovery. Those trapped in Yaloke face abysmal conditions with an alarming number of avoidable deaths. Since February 2014, at least 44 Muslim Peuhl, many of them children, have died in Yaloke, from malnutrition and respiratory and other diseases. Human Rights Watch raised the alarm in June and December 2014, urging that this community of Muslims be evacuated.

UN humanitarian agencies have echoed our call. On December 9 the World Health Organization (WHO) and UNICEF issued a report calling for the evacuation of the Peuhl from Yaloke, but there has been no implementation of their recommendation. The UN has held numerous discussions about the need to act, but appears deadlocked with a government that to date has refused to change its policy.

This cannot continue. Two things need to happen and action must be quick. First, medical and humanitarian assistance should be urgently provided to the Muslims in Yaloke. There are humanitarian organizations contracted by the UN working in the enclave, but their efforts are not stopping the alarming death rate and the UN needs to urgently find out why.

Second, the transitional government needs to change its policy and work with the UN to help those Muslims who want to leave. The country’s interim president, Catherine Zamba-Panza, took office a year ago today. She should mark the occasion by changing her government’s policy on evacuations. Continuing to infringe on the rights of Muslim citizens to freedom of movement in their own country or to leave to seek asylum abroad is simply indefensible and UN peacekeepers should not be complicit in preventing Muslims to seek safety.

The crisis in the Central African Republic technically is near the top of the international humanitarian agenda: for much of last year, it was declared an L3 emergency by the UN, on par with the crisis in Syria. The fate of those trapped in Yaloke and in other enclaves should therefore be a top priority. The time for endless meetings with no action is over. It’s time to prevent more Muslim children dying needlessly.