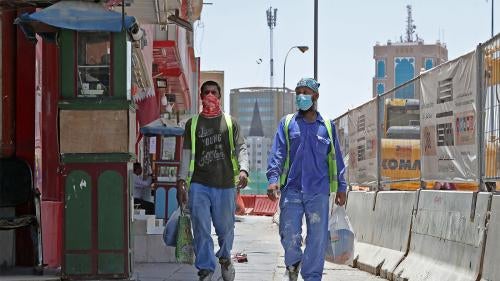 In September, Qatar introduced significant labor reforms allowing migrant workers to change jobs without employer permission and setting a higher and non-discriminatory minimum wage. Earlier, in January, Qatar extended the right to leave the country without employer permission to workers not covered by the labor law. However, certain elements of the kafala (sponsorship) system remain in place, facilitating abuse and exploitation of the country’s large migrant workforce, and Qatari authorities’ efforts to protect migrant workers’ right to accurate and timely wages have largely proven unsuccessful. The Covid-19 pandemic further exposed and amplified the ways in which migrant workers’ rights are violated.

In January, Qatar amended its penal code to further restrict the already-narrow space for free expression by setting criminal penalties for spreading “fake news” online. In that same month, Qatar issued a decision to lift the rule that Qatari women must have their guardian’s permission to obtain a driving license. However, other male guardianship policies and discriminatory laws against women continue, including the policy requiring unmarried women under 25 to have male guardian permission before they travel abroad. In 2020, some women who had such permission or were over 25 were still asked to call their male guardian to confirm they had approval before they traveled. Lesbian, gay, bisexual, and transgender (LGBT) individuals continue to face discrimination. 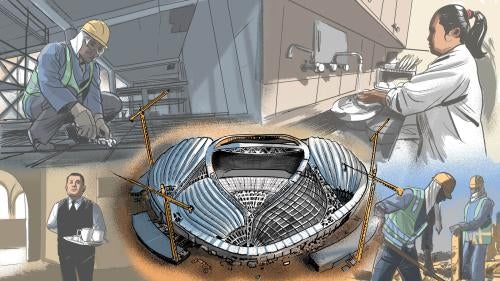 Qatar has a migrant labor force of over 2 million people, who comprise approximately 95 percent of its total labor force. Approximately 1 million workers are employed in construction, while around 100,000 are domestic workers.

In March and April, Human Rights Watch and other international human rights organizations highlighted the unique risks Covid-19 poses to already-vulnerable migrant worker populations in Qatar and the Gulf, calling on governments to take several steps to adequately protect migrant workers from the spread of the virus, including in immigration detention, prison conditions, and labor accommodations.

In January, Qatar extended the right to leave the country without their employer’s permission to migrant workers not covered by the labor law. The government had previously provided this right to most migrant workers in 2018, but not to those in government, oil and gas, agriculture, or domestic workers. However, employers can still apply for exceptions, and domestic workers are required to inform employers that they wish to leave at least 72 hours in advance.

In August, Qatar introduced legislation that allows all migrant workers to change jobs before the end of their contracts without first obtaining their employer’s consent, one of the key aspects of the kafala (sponsorship) system that can give rise to forced labor. Qatar also amended certain provisions of the labor law to allow migrant workers to terminate their employment contracts at will, both during the probation period and after, as long as they notify their employers in writing within a prescribed notice period. In addition, Qatar passed a new law establishing a higher and non-discriminatory basic minimum wage and a national minimum wage commission to periodically review the amount taking into account economic factors, including economic growth, competitiveness, and productivity, as well as the needs of the workers and their families.

While positive, other abusive elements of the kafala system remain, namely that a migrant worker’s legal status in Qatar remains tied to a specific employer, where an employer can apply, renew or cancel a worker’s residency permit, and that “absconding,” or leaving an employer without permission, remains a crime. Workers, especially low-paid laborers and domestic workers, often depend on the employer not just for their jobs, but for housing and food. Passport confiscations, high recruitment fees, and deceptive recruitment practices remain largely unpunished. Workers are banned from joining trade unions or striking. These remaining aspects of the kafala system continue to drive abuse, exploitation, and forced labor practices.

While the minimum wage and increase in penalties for wage abuse are important, this does not go far enough to tackle wage abuse. In August,  a Human Rights Watch report found that employers frequently violated workers’ right to wages and that mechanisms like the Wage Protection System did little to protect workers from wage abuse. These abuses only worsened during the Covid-19 pandemic.

Qatar continued to enforce a demonstrably rudimentary midday summer working hours ban. The heat stress guidelines are not comprehensive or obligatory for employers, and have no enforcement mechanisms. Moreover, for seven years, Qatar has not made public meaningful data on migrant worker deaths that would allow an assessment of the extent to which heat stress is a factor. Medical research published in July 2019 concluded that heatstroke is a likely cause of cardiovascular fatalities among migrant workers in Qatar.

In January, the General Department on Traffic issued a decision in a letter to the Department of Licensing Affairs to stop requiring guardian permission for women to obtain driving licenses. While the authorities repealed this requirement in the traffic law in 2007, it continued to be imposed in practice. Some women have been able to obtain licenses without such permission, however, some have expressed concern that it could easily be brought back as there is a lack of transparency due to unpublished rules.

The concept of male guardianship, which is incorporated into Qatari law, regulations and practices, undermines women’s right to make autonomous decisions about their lives. Single Qatari women under 25 years of age must obtain their guardian’s permission to travel outside Qatar. While married women at any age can travel abroad without permission, men can petition a court to prohibit their wives’ travel. Qatari women are also prohibited from events and bars that serve alcohol, and unmarried Qatari women under 30 years old are not allowed to check into a hotel. Qatari women are also required to have guardian permission in order to work for some government ministries and institutions, and women who attend Qatar University face restrictions on their movements. Women cannot marry without their male guardian’s permission regardless of age, while men can marry up to four wives without needing even their current wife’s permission.

Qatar’s personal status law also discriminates against women in marriage, divorce, child custody, and inheritance. Women are required to obey their husbands and can lose their husband’s financial support if they work or travel against their wishes. Men have a unilateral right to divorce while women must apply to the courts for divorce on limited grounds. Under inheritance provisions, female siblings receive half the amount their brothers get.

While the family law forbids husbands from hurting their wives physically or morally, and there are general criminal code provisions on assault, Qatar has no law on domestic violence to help prevent domestic violence, measures to protect survivors and prosecute their abusers.

Qatar allows men to pass citizenship to their spouses and children, whereas children of Qatari women and non-citizen men can only apply for citizenship under narrow conditions. This discriminates against Qatari women married to foreigners, and their children and spouses. In 2018, Qatar passed a permanent residency law that permits children of Qatari women married to non-Qatari men, among others, to apply for permanent residency, allowing them to receive government health and educational services, invest in the economy, and own real estate. However, some have complained that they have not received a response to their application. The law falls short of granting women equal rights to men in conferring nationality to their children and spouses.

In January, Qatar introduced an amendment to its penal code that imposes up to five years in prison for spreading rumors or false news with ill-intent. The new text does not define who determines what is a rumor or “fake news,” how to make such a determination, or what standards are to be used in doing so. It also fails to require that the information in question causes real harm to a legitimate interest.

Qatar’s penal code criminalizes criticizing the emir, insulting Qatar’s flag, defaming religion, including blasphemy, and inciting “to overthrow the regime.” Qatar’s 2014 cybercrimes law already criminalizes spreading “false news” on the internet (a term that is not defined) and also provides for a maximum of three years in prison for anyone convicted of posting online content that “violates social values or principles,” or “insults or slanders others.”

Qatar’s decision to arbitrarily strip families from the Ghufran clan of their citizenship starting in 1996 has left some members still stateless 20 years later and deprived them of key human rights. In 2020, Qatar made no commitments to rectify their status.

Stateless members of the Ghufran clan are deprived of their rights to work, access to health care, education, marriage and starting a family, owning property, and freedom of movement. Without valid identity documents, they face restrictions accessing basic services, including opening bank accounts and acquiring drivers’ licenses, and are at risk of arbitrary detention. Those living in Qatar are also denied a range of government benefits afforded to Qatari citizens, including state jobs, food and energy subsidies, and free basic healthcare.

Qatar’s penal code criminalizes sodomy, punishing same-sex relations with imprisonment between one to three years. Individuals convicted of zina (sex outside of marriage) can be sentenced to prison. In addition to imprisonment, Muslims can be sentenced to flogging (if unmarried) or the death penalty (if married) for zina. These laws disproportionately impact women, as pregnancy serves as evidence of extramarital sex and women who report rape can find themselves prosecuted for consensual sex.

Under article 296 of the penal code, “[l]eading, instigating or seducing a male in any manner for sodomy or dissipation” and “[i]nducing or seducing a male or a female in any manner to commit illegal or immoral actions” is punishable by up to three years. The law does not penalize the person who is “instigated” or “enticed.” It is unclear whether this law is intended to prohibit all same-sex acts between men, and whether only one partner is considered legally liable.

Journalists and printers operate under section 47 of the 1979 Press and Publications Law, which bans publication of “any printed matter that is deemed contrary to the ethics, violates the morals or harms the dignity of the people or their personal freedoms.” In 2018, private publishing partners in Qatar, including the partner of the New York Times, censored numerous articles that touched on LGBT topics.

Throughout 2020, the diplomatic crisis persisted between Qatar on one side and Saudi Arabia, Bahrain, Egypt, and the United Arab Emirates on the other, over Qatar’s alleged support of terrorism and ties with Iran.

Qatar hosted talks between the United States and the Taliban in Afghanistan that led to the February 29 peace agreement between the two adversaries aimed at ending the nearly 19-year-old Afghan war.