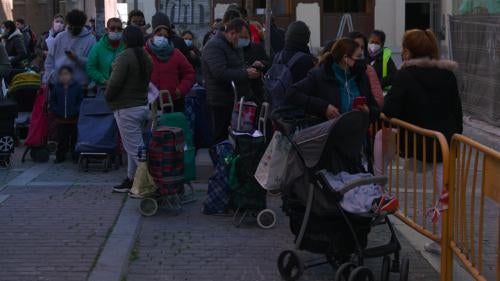 At the start of the pandemic, the Spanish government expanded existing unemployment support programs and introduced a new flagship social assistance program. However, despite the government’s stated good intentions, existing weaknesses and flaws in the social security system, as well as problems in the design of new forms of assistance, meant that support fell short of what was needed. Limitations on the scope and eligibility of both existing and new measures have meant that many people still depend on non-governmental food aid to feed themselves and their families, and struggle to meet their basic needs. As a result, Spain’s government is failing its obligations to protect and fulfil people’s rights to food and an adequate standard of living.

Spain was no exception to the devastation of the Covid-19 pandemic.

I never thought I'd be asking for food

and financial assistance at this point in my life.

As a mother, I feel anxious and terribly helpless.

My dream, my aspirations right now are immediate… to survive.

The consequences of the Covid-19 pandemic

have pulled hundreds of thousands of people

in Spain into poverty, compromising

protection of their basic rights.

The Spanish government has not

for food and financial support leaving

many people turning to food banks.

I’ve come here to collect food because I need it,  mostly as I’m unemployed now

and I don’t have another option.

I used to work as a computer technician,

and I even had my own business.  But I was very badly affected by the pandemic and now I’m in this financial situation, something that has never happened to me

before in my life.

that guarantees people’s right to food

and an adequate standard of living.

During the pandemic, the number of people

coming here increased significantly. Right now, the poverty situation is very serious. Because we’ve noticed that even people with jobs

aren’t enough to support their families.

in a furlough scheme and Minimum Vital

residents during the pandemic.

However, many people in need never received support.

75% of those who applied for IMV

When I worked in a factory,

I was getting something like 1,050 [euros] a month. My rent alone costs 730 euros. After you deduct the rent, transportation,energy, the water bill, the girls’ school expenses,

there is nothing left. It’s that simple.

established by the government like the minimum vital income, and we always find ourselves in limbo. What kind of limbo? Well, there is always a requirement that excludes us.

Pedro, who moved from Cuba,

is a Spanish citizen and one of

The biggest difficulty we have is the energy issue. We were very cold, during the winter

and we simply couldn’t afford to pay for the heating. Everything is a hardship

when you don't have enough. Coming here to Spain,

a land I loved from afar, and realizing that the

situation is so difficult.

We see no future. If we don't have a stroke of luck,

our prospects are terrible.

Right now, the income that

I have in my household is zero. Expenses can be 150 to 200 [Euros per month]. The pandemic’s economic impact

has very much been felt in my family. I worked cleaning houses,

but I lost [my job in] the houses because they were owned by older people. I’m waiting for an appointment

at the unemployment office so I can get my benefits.

But they never have openings.

For some, help has come from

and people who take care of the elderly. Followed by restaurant workers,

waiters and cooks. I think the government should have

stronger strategies to help families. The little that they're doing,

is not noticeable because otherwise we wouldn't

be here [in the pantry] for these types of cases.

When the pandemic came,

all these people were able to eat daily. No one was left behind.

and vegetables to community foodbanks

no one should go without basic food. If we let that happen

then we’ve lost our common sense.  For me, it’s crucial that no one goes hungry.  We must collaborate.

We must support one another. We must help.

lessons from the pandemic.

They should implement reforms to ensure

and an adequate standard of living.

People’s rights, including the ability to feed

their families, should always be protected,

especially in times of crisis.