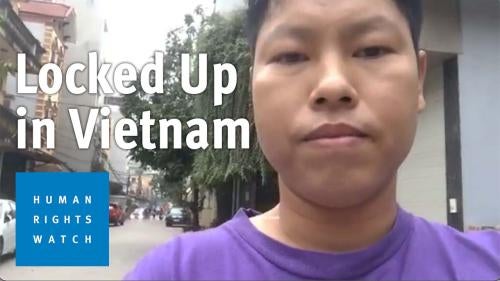 (Bangkok, February 17, 2022) – The Vietnamese government systematically restricts the rights to freedom of movement of political and human rights activists, Human Rights Watch said in a report released today. The authorities should immediately end all restrictions on movement and amend laws that curb citizens’ basic rights to freely travel within, from, and to Vietnam.

The 65-page report, “Locked Inside Our Home: Movement Restrictions on Rights Activists in Vietnam,” documents the Vietnamese government’s routine violation of the right to freedom of movement and other basic rights by subjecting activists, dissidents, human rights defenders, and others to indefinite house arrest, harassment, and other forms of detention. The authorities have detained activists just long enough to prevent them from attending protests, criminal trials, meetings with foreign diplomats and a US president, and other events.

Now I shall record the public security

force that is monitoring my house.

This is the public security force that has monitored

my house continually in the past few days.

this very force charged into my house, climbed onto my bed.

They climbed onto my bed to arrest me

and took me to the public security station.

from attending meetings or protests.

This is a violation of freedom of

movement and it needs to stop.

In this incident, Trinh Ba Phuong was beaten

by police and released a few hours later.

-What are you filming?

-Are you going to beat me up?

Are you beating me up?

In December 2021, Trinh Ba Phuong was sentenced to

ten years in prison for his reporting on land confiscation.

when they try to attend meetings abroad or

meet with foreign dignitaries in Vietnam.

Nguyen Quang A has been detained or put under

house arrest more than 24 times in the past eight years.

In this incident, he was

stopped from going to a public protest.

-Please go back in the house for your health.

Hey, son, why are you doing this?

At the very least he must have his own

liberty. You guys act as if he is a criminal.

He is going to take care of his business.

He is not joining the protest. He has work to tend to.

When he was invited to meet with

US President Barack Obama in 2016,

state security shoved Nguyen Quang A into a

car and drove around for several hours.

So he missed the meeting.

I should note that there were several

other activists who were invited

who were prevented from coming for various reasons.

In another incident, the police used furniture to

when he was set to meet with a

Respectfully to the international community,

I’m now going to Saigon, with my car here.

It is clear that they are blocking the front here.

I was preparing to go to Saigon, but

was stopped by these guys out here.

I will continue to report on this.

Authorities have also used padlocks to

keep dissidents in their homes.

These practices are so common, activists joke

Freedom of movement is a human right.