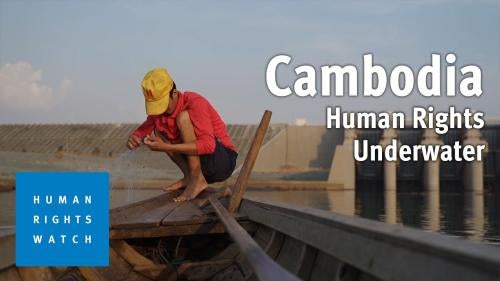 (Bangkok, August 10, 2021) -- A large hydroelectric dam in Cambodia, completed in 2018 and financed by the Chinese government, severely harmed the livelihoods of thousands of Indigenous and ethnic minority people. Neither the company responsible for the project nor the Chinese or Cambodian governments have adequately compensated losses or otherwise mitigated the dam’s impacts. They need to now do so. But the report also shows that China's Belt and Road funding comes with no oversight, which is what allows amoral or unscrupulous companies and local governments to undertake massive projects like this one, which displace thousands without due process and cause such immense uncompensated harms. China needs to reform its funding and ensure oversight to prevent such harms in the future.

John Sifton, Asia Advocacy Director of Human Rights Watch (onsite): So this entire area… on top of what used to be Sre Kor village. It was completely flooded after the Lower Sesan 2 Dam was completed in 2017.

Narration:  The ­Lower Sesan 2 dam is one of the widest dams in Asia. The project is part of the Chinese government’s mammoth “Belt and Road Initiative,” an investment and infrastructure project that the government began under President Xi Jinping in 2013 to advance Chinese foreign policy interests globally.

Narration: Flooding of the dam’s reservoir inundated numerous communities and damaged the ecology of the region. In addition, about 5,000 people, mostly Indigenous or ethnic minorities lost their homes.

John Sifton, Human Rights Watch (onsite): Most of the villagers didn’t have appropriate compensation. Some who were relocated that now live in an area quite far from here and pretty disappointed what happened to their village.

Narration: Much of the damage and devastation the dam would bring was known before it was built, and locals voiced their concerns even then.

Woman: We were worried about relocating and moving our homes, cows, water buffalos, pigs, and chickens.

Man: We are also worried about our rice fields, crops, the hospital, school and the Srepok river.

Man: I am very worried about this situation. I am deeply troubled about losing my fields and land.

Woman: We do not want to move away because we have well-made valuable houses. We have coconut trees, mango trees, and everything. If we live at a new place, we won’t have coconuts and mangos to sell anymore.

Narration:  Many of those displaced were moved to areas that lacked clean water and the soil was not well-suited for farming. They received inadequate compensation for the loss of their homes or income. Tens of thousands whose livelihoods depended on fishing on the rivers around the dam, suffered enormous losses in income.

Narration:  The dam has decimated the fish population in a country where fish makes up 60 to 75 % of the protein of the Cambodian diet.

John Sifton onsite:  So we’re in a village on the Sre Kor river. Some villagers said they used to catch up to 40 kilos of fish a night. Now they sometimes struggle to get 10klmoften less than that.  The fish are also smaller and fetch less money. Sometimes only a dollar a kilo and they’re struggling to survive.

Narration: The companies involved in the Lower Sesan 2 project, as well as the Cambodian and Chinese governments that authorized the project, should review the project’s impact urgently and allocate significant new resources to remedy the harms they have caused.

Narration: As the Chinese government finances other Belt and Road projects, whether in Cambodia or elsewhere, government and company officials need to take far greater steps to protect the human rights of affected communities and compensate them when they’re harmed.