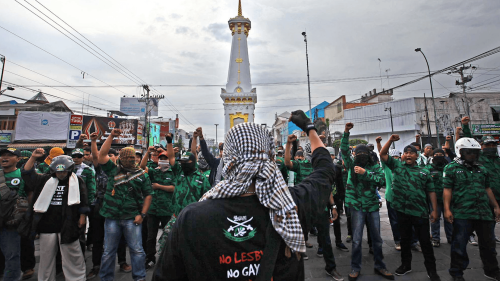 Indonesian government officials have made a series of anti-LGBT comments, resulting in proposals of laws which pose a serious threat to the rights and safety of LGBT Indonesians.

Human Rights Watch conducted 70 interviews with Indonesian sexual and gender minorities, LGBT human rights activists, and other civil society representatives across Indonesia between January and June 2016. The series of anti-LGBT remarks began on January 24, when the higher education minister, Muhammad Nasir, said he wanted to ban LGBT student organizations from university campuses. Reacting to the formation of a student-run group that led scholarly discussions on gender and sexuality at the University of Indonesia in Jakarta, Nasir proclaimed that such groups were not “in accordance with the values and morals of Indonesia.”

Within weeks, statements ranging from the absurd to the apocalyptic echoed through Indonesia’s media. At a maternal health seminar, a mayor warned young mothers to teach their children how not to be gay. Ryamizard Ryacudu, the defense minister, labeled LGBT rights activism a proxy war on the nation led by outsiders, more dangerous than a nuclear bomb.

Mainstream mass religious groups such as the Nadhlatul Ulama (NU), the country’s largest Muslim organization and a recipient of foreign aid money to work with LGBT populations, called for criminalization of LGBT behaviors and activism, and forced “rehabilitation” for LGBT people. The Indonesian Psychiatric Association joined the anti-LGBT chorus by proclaiming same-sex sexual orientation and transgender identities “mental illnesses” and recommending psychological “rehabilitation.”

“These Political Games Ruin Our Lives”