(London) – Governments should act swiftly to redress the harm caused to children’s education in the wake of the unprecedented disruption from the Covid-19 pandemic, Human Rights Watch said in a report released today. Human Rights Watch accompanied its report with an interactive feature exploring common barriers to education exacerbated during the pandemic.

The 125-page report, “‘Years Don’t Wait for Them’: Increased Inequalities in Children’s Right to Education Due to the Covid-19 Pandemic,” documents how Covid-related school closures affected children unequally, as not all children had the opportunities, tools, or access needed to keep on learning during the pandemic. The heavy reliance on online learning exacerbated the existing unequal distribution of support for education, Human Rights Watch found. Many governments did not have the policies, resources, or infrastructure to roll out online learning in a way that ensured that all children could participate on an equal basis.

“With millions of children deprived of education during the pandemic, now is the time to strengthen protection of the right to education by rebuilding better and more equitable and robust education systems,” said Elin Martinez, senior education researcher at Human Rights Watch. “The aim shouldn’t be just to return to how things were before the pandemic, but to fix the flaws in systems that have long prevented schools from being open and welcoming to all children.”

Human Rights Watch interviewed more than 470 students, parents, and teachers in 60 countries between April 2020 and April 2021.

“Their teacher called me to tell me to buy a big phone [smartphone] for online teaching,” said a mother of seven in Lagos, Nigeria who lost her income when the university where she cleaned shut down due to the pandemic. “I don’t have money to feed my family and I am struggling to make ends meet. How can I afford a phone and internet?”

As of May 2021, schools in 26 countries were closed country-wide, and schools were only partially open – either just in some locations or only for some grade levels – in 55 countries. An estimated 90 percent of the world’s school-aged children have had their education disrupted by the pandemic, according to UNESCO.

For millions of students, school closures will not be a temporary interference with their education, but the abrupt end of it, Human Rights Watch said. Children have begun working, married, become parents, grown disillusioned with education, concluded they cannot catch up, or aged-out of free or compulsory education as guaranteed under their country’s laws. 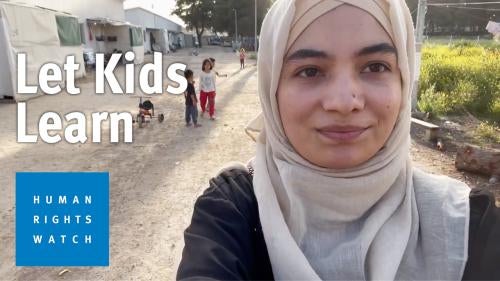 Even for the students who have returned, or who will return, to their classrooms, the evidence suggests that for years to come they will continue to feel the consequences of lost learning during the pandemic.

The damage to many children’s education is built on pre-existing issues: one in five children were out of school even before Covid-19 began to spread, according to UN data. Covid-induced school closures tended to particularly harm students from groups facing discrimination and exclusion from education even before the pandemic.

They include children living in or near poverty; children with disabilities; ethnic and racial minorities in a country; girls in countries with gender inequalities; lesbian, gay, bisexual, and transgender (LGBT) children; children in rural areas or areas affected by armed conflict; and displaced, refugee, migrant, and asylum-seeking children.

“Governments had years of solid evidence showing them exactly which groups of children were most likely to suffer educationally during school closures, and yet these children faced some of the greatest barriers to continuing their studies,” Martinez said. “Just reopening schools will not undo the damage, nor even ensure that all children will return to school.”

Schools entered the pandemic ill-prepared to deliver remote education to all students equally, Human Rights Watch found. This was due to governments’ long-term failure to remedy discrimination and inequalities in their education systems, or to ensure basic government services such as affordable, reliable electricity in homes, or facilitate affordable internet access.

Children from low-income families were more likely to be excluded from online learning because they could not afford sufficient internet or devices. Historically under-resourced schools with students who already faced greater obstacles to learning particularly struggled to reach their students across digital divides. Education systems often failed to provide digital literacy training for students and teachers to ensure they can use these technologies safely and confidently.

Education should be at the core of all governments’ recovery plans, Human Rights Watch said. Governments should both address the impact of the pandemic on children’s education and the pre-existing problems. In light of profound financial pressures on national economies from the pandemic, governments should protect and prioritize funding for public education.

Governments need to hastily get back on track with the commitments they made in 2015 through the United Nations Sustainable Development Goals to guarantee all children receive an inclusive quality primary and secondary education by 2030, Human Rights Watch said. They should do intensive outreach to ensure that children most at-risk of dropping out or facing barriers, return to school.

Governments and schools should analyze who left school and who came back and ensure that back-to-school programs seek out all of those who dropped out, including by providing financial and social benefits. Outreach for back-to-school campaigns should be broad, and welcome children and youth who were already out of education when schools had to close.

All governments, and the donors and international actors supporting them, should be firm in their commitments to strengthen inclusive public education systems. Building stronger systems requires adequate investment and equal distribution of resources as well as swiftly removing discriminatory policies and practices, adopting plans to redress the right to education for millions of students, and providing affordable, reliable, and accessible internet to all students.

“Children’s education was forfeited in an effort to protect everyone’s lives from the coronavirus,” Martinez said. “To compensate for children’s sacrifice, governments should finally rise to the challenge and urgently make education free and available for every child around the world.”

Decades of slow but steady progress in educating more children around the world abruptly ended in 2020. By April, an unprecedented 1.4 billion students were shut out of their pre-primary, primary, and secondary schools in more than 190 countries, in an effort to slow the spread of the novel coronavirus, according to UNESCO. Schools in some countries later re-opened, or opened for some students, while elsewhere there has been no return to in-person schooling since. During school closures, in most countries, education moved online or was delivered otherwise remotely, but with vast variations in success and quality. Issues including internet access, connectivity, accessibility, material preparedness, teacher training and home situations, factored heavily in the feasibility of remote learning.

Selected Testimony from the Report

A middle school teacher in rural California, in the United States, said: “A lot of these problems that we are facing with distance learning are problems that we deal with every day in the classroom: lack of internet at home, lack of resources, lack of parent support at home, chaos at home, lack of a schedule at home, uncertainty around food, uncertainty around housing. These aren’t new problems. They just became very, very apparent when all of a sudden, teachers have a front row seat to see it in these children’s homes through Zoom or the fact that they were not at school.”

A 16-year-old student in Garissa, Kenya, said that when her school offered no guidance on how to study during school closures, she tried to get in touch with one teacher. “He said he would not be able to go to anyone’s home, but they could come to his house. As girls we feared going to his house, but I hear the boys have been going.” She said she sometimes watched classes on television, but she was not able to attend all of them because of her chores at home, as she lives with two grandmothers who rely on her care. “It takes up a significant portion of my day attending to them. My chores have increased of course because schools have closed.”

A mother in Armenia said that her grade-7 son, who has a hearing disability, attends classes on Zoom using a smartphone: “It is very hard for him to see sign language via phone… Imagine watching it on the phone…[and imagine also the phone screen divided into seven.”

In Kazakhstan, a 16-year-old boy said that his school wanted to hold classes on Zoom, but the internet was not capable of supporting it: “There were connection glitches and internet malfunctions.”

A father in Mumbai, India, who has two children, said: “We have one computer in the family. Both my wife and I are working from home, so we need it. Now both children have classes, so they need to be on the computer. Two children with classes at the same time, so actually we need two computers. We are taking salary cuts, how can we afford to buy another laptop? So, one child is missing class.”

A second-grade teacher at a school near Potsdam, Germany, said: “The announcement came that Skype would be installed on the school computers, so teachers could use Skype to keep in touch with students and parents… It turned out that the school computers did not have a camera, so the topic was closed… The conditions for teachers to work online or computer based are not given, which limits teachers’ ability to provide education to students during school closures.”

A teacher at a private secondary school in São Paulo, Brazil, which he described as “extremely privileged,” said that he had already been teaching using a digital platform for five years: “So I get to teach the same way I was teaching before… In my world, things are pretty easy.”

In Nepal, a 14-year-old boy started working when his school shut and his family ran out of food. “For a while I thought that I would go back when the school reopens, but I don’t think that anymore,” he said. “I enjoy driving and making money so what will I do going back to school now? Even if I do go back to school, it won’t be for long.”