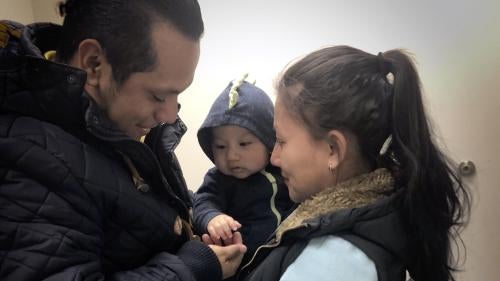 (Iowa) – The administration of United States President Joe Biden should move swiftly to ensure fair, dignified, and humane treatment of asylum seekers and migrants at the border, Human Rights Watch and the Iowa City Catholic Worker said in a video released today. The video follows a family still separated after almost two years under the “Remain in Mexico” program, also known as the Migrant Protection Protocols (MPP).

The administration of former President Donald Trump sent over 71,000 asylum seekers back to Mexico under MPP, adopted in 2019. President Biden ended the returns last month. Some asylum seekers sent to wait in Mexico with active cases in immigration courts may sign up to start a process to enter the US as of February 19, 2021, according to a Department of Homeland Security announcement.

The new video follows one family from El Salvador – Alejandro, Juliza, and their infant son, Anderson – who were separated at the border in 2019. US officials forced Alejandro to wait in Mexico while eight-months pregnant Juliza continued alone to claim asylum in the United States, where she was welcomed by the Iowa City Catholic Worker, a Gamaliel affiliate. Returned to one of the most dangerous cities in Mexico, Alejandro was kidnapped and abused, treatment that has become very common for migrants and asylum seekers in Mexico.

“Faith communities have done crucial work to support asylum seekers and keep families together, but it should not be solely up to them,” said Policy Advocate with Faith Communities at Human Rights Watch Victoria Strang. “While the Biden administration has taken some positive steps, bold action is needed to transform the US border response into one that treats all asylum seekers with dignity.”

With the announcement of a process for some asylum seekers in Mexico to enter the United States, Alejandro and Juliza have a reason to hope that they may soon be together again. But the Biden administration has only promised to allow back about a third of those previously subject to MPP, and it is continuing summary expulsions of asylum seekers without due process under a Centers for Disease Control and Prevention (CDC) order adopted at the Trump White House’s urging over the objections of career public health officials.

“I pray Alejandro and all the refugees currently trapped in Mexico are permitted to enter the United States to pursue their asylum claims and reunite with their families and I call on the President to protect them,” said Father Guillermo Trevino, Jr., a Catholic priest from West Liberty, Iowa. “Iowa City Catholic Workers remain committed to building a better world where the God-given dignity of all humans is respected no matter the color of their skin or their immigration status.”