Until recently, Jail Ogaden in Ethiopia’s eastern Somali Region housed thousands of prisoners, many of them illegally arrested government critics and opposition figures who had been detained for years. Torture, rape and death were common in Jail Ogaden. Then, in April 2018, after protests, upheaval, and the surprise resignation of the country’s authoritarian prime minister, a new reform-driven government came to power led by Prime Minister Dr. Abiy Ahmed.

Several months later, in August 2018, the Somali Region’s president at the time, Abdi Illey – was arrested. As president of the Somali region, he was ultimately responsible for regional security forces in the region. He was replaced by Mustafa Omar, a long-time activist and UN worker. Mustafa’s appointment as president heralded in a new era of human rights reform and hope in the Somali Region, and one of the first steps as president was to shut down the notorious Jail Ogaden. Human Rights Watch’s senior researcher Felix Horne speaks to Audrey Wabwire about his recent visit to the Somali Region and the now-empty prison, and the Somali region’s path towards healing.

Why did you go to Jail Ogaden?

For years, Human Rights Watch had received reports about torture, rape, and massacres in the Somali Region. One of the commonalities in the stories we heard was that many of those who were arbitrarily arrested and tortured ended up in Jail Ogaden. So, we decided to focus a major research project on documenting abuses in Jail Ogaden. When our report was released in July 2018, our research findings about the suffering in the jail were part of a chain of events that led to the closure of the prison, the release of all its political prisoners, and other positive changes in the Somali Region.

Now, after years of being not permitted to enter Ethiopia to conduct research, Human Rights Watch and other human rights groups can visit, although acquiring visas remains a challenge. During one of my first trips back to the country, I wanted to get to the Somali Region, visit Jail Ogaden, and see firsthand the prospects for justice and accountability and how the former political prisoners are trying to heal from past abuses.

What did you see at the prison?

Walking through the front gate of the prison was one of those moments exemplifying the changes we’ve seen in Ethiopia – a year ago, this would have been impossible. It was very emotional for me, as the faces of torture victims rushed through my mind. I kept replaying the stories they told me as I walked around the jail. It was quite something seeing this jail closed and empty, even as the evidence of its terrifying past could be seen all around.

The rooms were much brighter than I expected. I was told that, when the jail was still open, prisoners were told to decorate the rooms with colored scraps of paper to make it look like they were “happy” ahead of visits by dignitaries, including Ethiopia’s Human Rights Commission. I saw a lot of these scraps of paper still hanging on the ceilings. I also saw lots of graffiti on the walls with prisoners’ names and dates. Much potential evidence was strewn about. There were prisoners’ diaries and wardens’ logs just lying on the ground. Goats were walking around, grazing on grass and whatever else they could find.

I went to Room 8. Many former prisoners had told me how this room was specially set aside for torture and solitary confinement. It’s a small dark musty room with a damp air. It was chilling being in there and thinking about all the stories I had heard.

Many people we interviewed spoke of a place in the jail where people were buried. When I went to that area, I saw lots of bones; some were definitely animal bones, but there were all kinds of bones there and I wondered whether the remains of former prisoners could have been there as well.

What happened to those running Jail Ogaden who oversaw the torture?

Some of those responsible for the abuses at Jail Ogaden are now in prison and facing justice. Others are on the run. When I was in the Somali Region last month, I interviewed Shamaahiye Sheikh Farah, commonly known as “Shamaahiye,” one of the former prison heads of Jail Ogaden and a colonel in the abusive Liyu police. I met Shamaahiye at another prison in Jijiga, capital of the Somali region, where he has been held since late 2018. He was tried and convicted of involvement in the deaths of several Jail Ogaden prisoners. He is now appealing his conviction and 18-year-prison sentence for his actions in Jail Ogaden.

It was quite emotional for me to remember all the victims describing the torture they endured, and then to see Shamaahiye in prison and in court. There’s a sense of justice. But disappointingly, media and civil society actors were not present at the court proceedings, and many people do not know about these arrests or proceedings. With many victims unaware that these trials are ongoing, it is a missed opportunity for their healing and reconciliation.

How did you conduct the research on Jail Ogaden given that Ethiopia would not permit access?

Between 2016 and 2018, we conducted interviews in ten countries with over 70 victims, perpetrators, and witnesses of torture and other abuses in Jail Ogaden, many of whom had fled Ethiopia after leaving Jail Ogaden. One of the things that sets this prison apart is that some of the torture was carried out in front of other prisoners, so there are many hundreds of witnesses for some of the torture, making it relatively easy to corroborate the incidents we investigated. We also obtained 25 hours of video footage from a 2011 Somali Regional government assessment of prison guard performance in the jail where prison guards described what they have done. 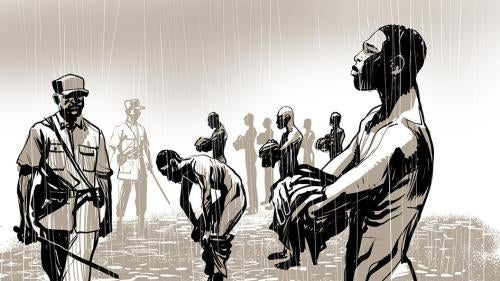 We used satellite imagery to help interviewees identify different areas, such as where food was cooked or where women were held. This allowed me to visualize dimensions, what the prison looked like, and the general layout without actually being able to visit.

Jail Ogaden is now closed and there’s been some progress towards accountability for past crimes, but what’s next for the Somali Region?

It’s a good question. The Somali Region is trying to come to terms with its abusive past and is asking all the right questions about how to have meaningful accountability and justice on the one hand, with the need for reconciliation and healing on the other.

There’s are also the formidable challenge of reforming the security forces and rebuilding institutions like the judiciary that for years were suppressed or subject to politicized appointments. Positive steps have been taken in reforming the abusive Liyu police, although it’s still early days yet. The government’s commitment to these initiatives is commendable.

There also hundreds of thousands of conflict-related IDPs in the region, primarily those who fled clashes in 2017 and 2018 along the border between the Somali Oromia regions. Some fled because Oromo mobs burned their houses, or their family members were slaughtered by these mobs, sometimes with the collaboration of regional or local security forces. They cannot just return home.

In some parts of the country, the federal government is pressuring IDPs to return home. IDPs we spoke to in the Somali Region were quite clear that they did not want to return to their former homes in Oromia because they still feel unsafe, and they believe those responsible for the atrocities they fled are still walking freely. With over one million IDPs in the region due to the ongoing drought, and forecasts of more droughts, the humanitarian challenges in the region remain daunting.

And Jijiga and surrounding areas are still recovering from the awful violence of August 2018 when Somali youth loyal to then president Abdi Illey targeted non-Somalis. Churches were burned, non-Somalis were driven out of Jijiga, and at least 15 civilians, likely more, were killed. Many have returned to Jijiga but not all.

Federal, regional, and local elections are scheduled for May 2020, and while it’s not yet clear what role the Somali Region’s opposition Ogaden National Liberation Front (ONLF) might play in elections, it is an obvious milestone for the Somali Region’s reform trajectory. ONLF was previously considered a terrorist organization by the federal government, but following a peace agreement in October 2018, they were removed from that list, have been largely disarmed, and have been welcomed back into the Somali Region where they operate freely.

So, the Somali Region government has taken a number of steps to improve the protection of rights and justice, but considerable challenges remain.