(Washington, DC) – Any policies adopted by the United States that result in returning people fleeing violence in Central America to persecution or torture would violate US obligations, Human Rights Watch said. President Donald Trump is expected to announce an executive order on October 30, 2018 that will reportedly use various methods to block people fleeing violence from accessing asylum in the US.

Extreme violence related to organized crime, and in some instances abusive security forces, is a major problem throughout much of Central America’s Northern Triangle – Honduras, Guatemala, and El Salvador. Violence and threats, often targeted, have prompted increasing numbers of people from those countries to seek asylum in the region and around the world.

“Given how dangerous life at home has become over the past few years, more people from Honduras, Guatemala, and El Salvador are claiming asylum in Mexico, the US, and beyond,” said Clara Long, senior US researcher at Human Rights Watch. “The migrant caravan isn’t increasing the flow in total numbers, but people told me that joining it was the safest way to escape. Traveling mostly on foot, with children, is dangerous and exhausting, and they hope for safety in numbers during the journey.” 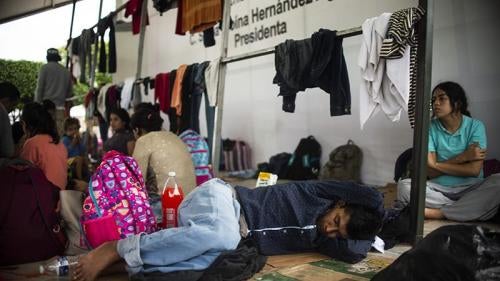 A total of 50,000 people tried to cross the Mexico-US border in September. But such surges are usually followed by much lower numbers in subsequent months. The US seems to be on target for the 25,000 for October that has been typical since 2009.

But even under flawed procedures for granting asylum, more Central American migrants are being recognized as refugees, not just in the US but regionally and globally. In 2009, Mexico granted asylum to just 15 Northern Triangle citizens, but in 2017, it recognized 1,910. US asylum grants to Central Americans have increased from 811 for the three countries in 2013 to 8,969 in 2017.

The United Nations estimated that the migrant group in Mexico had grown to 7,000 people, some 2,300 of them children, but the numbers are now dwindling, according to the Mexican government. They are at least hundreds of miles away from the US-Mexico border and mostly traveling by foot.

Some participants in a primarily Honduran group of migrants traveling through Guatemala told Human Rights Watch in recent days they intended to seek protection in Mexico. The Mexican government reports that 1,700 have done so already. Others wondered whether they would be safe in Mexico, a concern likely to be exacerbated after Mexican security forces shot dead a young Honduran migrant in the caravan over the weekend.

In addition to fleeing violence, some also migrate to escape crushing poverty or return to US-based family members. One recently deported father in the caravan told Human Rights Watch he was returning to be present and active in his US-born children’s lives.

The US may face particular challenges managing migrants traveling in a concentrated group all at the same time. But instead of using a variety of means to block asylum seekers, the US has sufficient resources to effectively and efficiently screen people for protection needs and to manage other migration flows while respecting human rights, Human Rights Watch said.

“Even if thousands of people from these groups sought to enter the US, they would represent a fraction of the normal number of border arrivals,” Long said. “Migrant families say they join caravans to be safer by being more visible, and the side effect to this is that it makes the normal migratory flows more visible, too.”