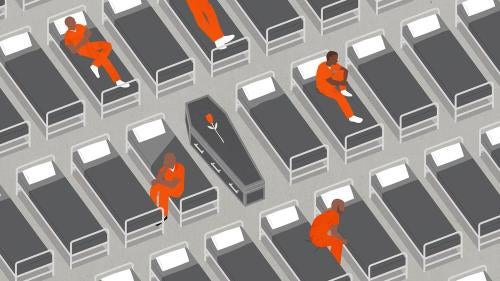 Based on the analysis of independent medical experts, the 72-page report, “Code Red: The Fatal Consequences of Dangerously Substandard Medical Care in Immigration Detention,” examines the 15 “Detainee Death Reviews” ICE released from December 2015 through April 2017. ICE has yet to publish reviews for one other death in that period. Eight of the 15 public death reviews show that inadequate medical care contributed or led to the person’s death. The physicians conducting the analysis also found evidence of substandard medical practices in all but one of the remaining reviews.

“ICE has proven unable or unwilling to provide adequately for the health and safety of the people it detains,” said Clara Long, a senior US researcher at Human Rights Watch. “The Trump administration’s efforts to drastically expand the already-bloated immigration detention system will only put more people at risk.”

Based on the death reviews, the groups prepared timelines of the symptoms shown by people who died in detention and the treatment they received from medical staff, along with medical experts’ commentary on the care documented by ICE and its deviations from common medical practice. The deaths detailed in the report include:

“Immigrant detention centers are dangerous places where lives are at risk and people are dying,” said Silky Shah, executive director of Detention Watch Network, a national coalition that exposes the injustices of the US’ immigration detention and deportation system. “The death toll amassed by ICE is unacceptable and has proven that they cannot be trusted to care for immigrants in their custody.”

“To the extent that Congress continues to fund this system, they are complicit in its abuses,” said Heidi Altman, policy director at the National Immigrant Justice Center, a nongovernmental group dedicated to ensuring human rights protections and access to justice for all immigrants, refugees, and asylum seekers. “Congress should immediately act to decrease rather than expand detention and demand robust health, safety, and human rights standards in immigration detention.”

The medical experts who analyzed the death reviews for the groups include Dr. Marc Stern, the former health services director for the Washington State Department of Corrections; Dr. Robert Cohen, the former director of Montefiore Rikers Island Health Services; and Dr. Palav Babaria, the chief administrative officer of Ambulatory Services at Alameda Health System in Oakland, California, and assistant clinical professor in Internal Medicine at the University of California, San Francisco.

Six of the new deaths examined occurred at facilities operated by the following private companies under contract with ICE: CoreCivic, Emerald Correctional Management, the GEO Group, and the Management and Training Corporation (MTC).

“ICE puts thousands of people’s health and lives at risk by failing to provide adequate medical care to the people it detains for weeks, months, and even years,” said Victoria Lopez, senior staff attorney at the American Civil Liberties Union.