At age 25, Leonardo Barcellos de Albuquerque is finally where he wants to be – at home, living with his mother in Rio de Janeiro, Brazil. He is creating his fourth music album – he released three other CDs over the past three years – and is also training for bocha, a tossing game that’s a Paralympic sport, similar to bocce or pétanque.

But his joy of being at home will most likely be short-lived. Leonardo has muscular dystrophy, a progressive condition leading to severe muscle degeneration. And his mother, Celia, who is 60, suffers from severe back pain and is not strong enough to lift or move him.

Additionally, Celia is a retired civil servant so her pension is simply too small to support them. Friends are helping to pay for Leonardo’s medicines and their rent, and nongovernmental organizations are donating diapers and food. But without the money to hire a personal assistant, it is difficult for Celia to have Leonardo live at home.

That’s why, when a new institution suitable for Leonardo is built – it’s expected to be completed later this year – they’ve decided Leonardo will live there. They both would rather Leonardo lived at home. But for that to happen, they’d need support from the Brazilian government.

For now, this is not the case.

Leonardo’s experience is not unique. Thousands of people in Brazil live in residential institutions for people with disabilities. Most institutions are understaffed, leading to neglect and inhumane conditions. While most staff we spoke with were committed and well-meaning, a lack of information and training leads to abusive practices in some cases, like drugging patients without their consent or tying them to their beds.

Many families would have preferred to support loved ones themselves, but there are just not enough community-based services and financial resources from Brazil’s government for families to raise children with disabilities at home.

It won’t be Leonardo’s first time in an institution. He lived in one as a child, after a court took him away from his biological parents. When Celia visited the orphanage where he had been sent, Leonardo came up and introduced himself. He must have been charming, because, even though they never intended to adopt, Celia and her late husband brought him home and into their family.

“I found a family, which is what I was looking for and what I wanted for my life,” Leonardo said. 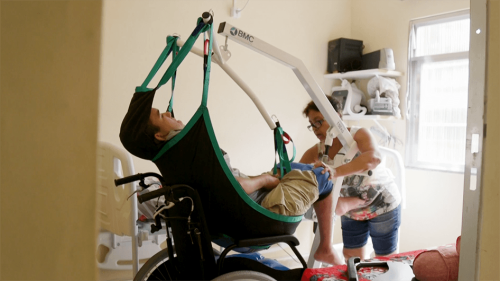 When he was 9, he was diagnosed with muscular dystrophy. By the time he was 11, he could no longer walk. A few years later, Leonardo fell at school, and the school claimed they had no one to help him and he could no longer attend, Celia said. She was furious and fought with the school, to no avail. A teacher did come to their home, though, so he could continue his education.

As his condition deteriorated, living at home became more difficult. His mother left for work at 4 a.m. and came home at 5 p.m., and Leonardo spent the day alone. She would leave him a packed lunch and water where he could reach it, but occasionally the unexpected happened. “Sometimes I would try to do something and fall off the chair.” He would have to lie on the floor until his mother got home, sometimes urinating on himself.

When she found him on the floor, Celia felt desperate. “I also would not have the strength to get him up, to handle him.”

An institution seemed their only choice. So, when he was 15, he and his mother made the decision for Leonardo to live in an institution. “I suffered deeply when Leonardo had to be moved into the institution, but I had no other alternative,” Celia said. “The state doesn’t provide me with any support to care for him at home.”

His new living situation was good, but it wasn’t home. He didn’t like the food – the spaghetti and vegetables weren’t made with love the way his mom cooked, he said – and he shared a room with 24 other people with disabilities, their beds placed side-by-side. He was stuck in bed most of the day, even for meals. Everything ran according to a rigid schedule.

Still, the insitution’s employees did take them on outings to the beach or the zoo, and he made new friends there. Many of these friends had more severe disabilities than he did. This changed the way Leonardo saw the world and himself. “My limitation was about accepting myself,” he said. “But to see children who could smile even with greater limitations, I realized…” he trails off. “It made me better as a human being. It made me grow in a different way.”

Outside of missing his mother, his biggest issue was boredom. He needed activities to keep his mind focused, to keep it from traveling to dark places that left him feeling depressed.

Yet through his own ingenuity, and with the help of his friends and teachers, he kept writing music. “When I’m sad I sing and when I’m happy I sing as well, and that is something that keeps me motivated to live more, to live better, to live happier.”

Leonardo lived in the institution for nine years.

But his muscular dystrophy left him susceptible to infection – an ever-present danger when one sleeps in a room with so many people. He caught pneumonia twice. “I was scared that I could get sicker, and was afraid I’d die.”

He’s happy there, keeping his mom company. But it’s the generosity of others that has given him this opportunity. A nearby institution gives them food and diapers, which are very expensive. A nongovernmental organization gave Leonardo a wheelchair, and a friend donated his bed. Friends are helping pay the family’s rent and Leonardo’s speech therapist and physical therapist costs. Friends even helped them buy a hoist to move Leonardo out of bed and into his wheelchair. The costs of drugs alone – both for Leonardo, and for his mother, who has diabetes and arthritis – is prohibitive.  “I can’t make ends meet!” Celia said in frustration.

For Leonardo to stay at home for good, they’d need a personal assistant for 20 hours a day – someone to help lift him and change his diapers. “The problem is, it’s very expensive, and we don’t have the money to pay anyone,” Leonardo said. 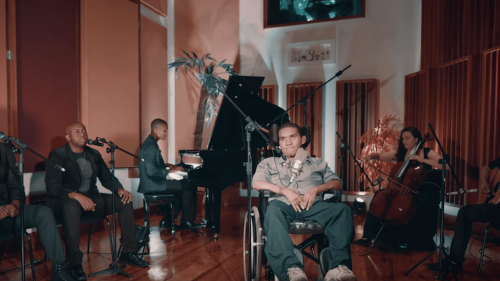 When he left the institution, a social worker said that the government should provide Leonardo with the same money it provided to the institution to care for him. But they haven’t seen any of it. “This money does not come to me and we do not know why,” he said.

He wants to stay at home to support  his aging mother. And he knows other people with disabilities feel the same way. “I want to help people in the same situation,” he says. “I believe that the government could provide better support to people with disabilities” and that everyone should “have the right of choice to live in your own house and not have to live in an institution without wanting to.”

He also hopes to bring about change through his music. One of his songs, “Luz do bem” (“light of good” in English), for which he wrote the lyrics and composed the music, is especially important to him. He even helped create a video for the song – with him singing – which is posted on Youtube.

“We talk about love in this song, that love can change the world, transform the nation. I believe that, through my music, I can spread the love for the world.” He hopes the song will help people understand each other better, and “contribute more to this love.”