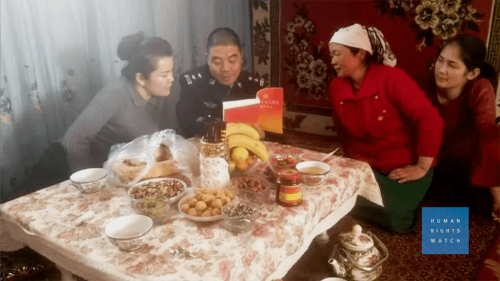 Chinese officials, since early 2018, have imposed regular “home stays” on families in the predominantly Muslim region of Xinjiang, Human Rights Watch said today. These visits are part of the government’s increasingly invasive “Strike Hard” campaign in the region, home to 11 million Uyghurs and other Turkic Muslim minorities.

During these visits, families are required to provide officials with information about their lives and political views, and are subjected to political indoctrination. The Chinese government should immediately end this visitation program, which violates rights to privacy and family life and the cultural rights of ethnic minorities protected under international human rights law, Human Rights Watch said.

“Muslim families across Xinjiang are now literally eating and sleeping under the watchful eye of the state in their own homes,” said Maya Wang, senior China researcher at Human Rights Watch. “The latest drive adds to a whole host of pervasive – and perverse – controls on everyday life in Xinjiang.”

Since 2014, Xinjiang authorities have sent 200,000 cadres from government agencies, state-owned enterprises, and public institutions to regularly visit and surveil people. Authorities state that this initiative, known as “fanghuiju” (访惠聚, an acronym that stands for “Visit the People, Benefit the People, and Get Together the Hearts of the People” [访民情、惠民生、聚民心]), is broadly designed to “safeguard social stability.”

In October 2016, authorities initiated a related effort, called the “Becoming Family” (结对认亲) campaign. About 110,000 officials visit the largely Turkic Muslim population in southern Xinjiang every two months with a view toward “fostering ethnic harmony.” This “Becoming Family” campaign has been greatly expanded in recent months. In December 2017, Xinjiang authorities mobilized more than a million cadres to spend a week living in homes primarily in the countryside. They typically stay with Muslim families, though sometimes cadres are dispatched to stay with Han families.

In early 2018, Xinjiang authorities extended this “home stay” program. Cadres spend at least five days every two months in the families’ homes. There is no evidence to suggest that families can refuse such visits.

The cadres perform several functions during their stay. They collect and update information about the families, such as whether they have local hukous – household registration – or are migrants from another region, their political views, and their religion. The visiting cadres observe and report on any “problems” or “unusual situations” – which can range from uncleanliness to alcoholism to the extent of religious beliefs – and act to “rectify” the situation. Cadres also carry out political indoctrination, including promoting “Xi Jinping Thought” and explaining the Chinese Communist Party’s “care” and “selflessness” in its policies toward Xinjiang. They also warn people against the dangers of “pan-Islamism,” “pan-Turkism,” and “pan-Kazakhism” – ideologies or identities that the government finds threatening. The authorities expect all of these to be done through “heart-to-heart” talks about everyday life.

Cadres are tasked with imposing a sense of ethnic unity between the families and the Han majority. They teach the families Mandarin, the Han majority language; make them sing the Chinese national anthem and other songs praising the Chinese Communist Party; and ensure families participate in the weekly national flag-raising ceremony. Cadres and the families are also required to participate in activities together, such as Han Chinese New Year festivities, as well as group games, dancing, and sports. Cadres are also required to help the families, from sweeping the grounds and planting seedlings to helping them obtain government benefits and subsidies, regardless of whether such assistance has been requested.

Local news and social media have detailed the initiative’s implementation:

The cadres meticulously document their activities, including by submitting reports of the homestays with accompanying photos. Some of these photos and videos can be found on the Wechat and Weibo accounts of the participating agencies, which show scenes of cadres living with minority families, including in the most intimate aspects of domestic life, such as cadres and family members making beds and sleeping together, sharing meals, and feeding and tutoring their children. None of these videos or photos are posted by the visited families, and there is no indication that they consented to having them posted online.

“China’s deeply invasive forced assimilation practices against Muslims not only violate basic rights, but are also likely to foster and deepen resentment in the region,” Wang said. “Xinjiang authorities should immediately end the ‘Strike Hard’ campaign and all the related abuses.”

For more information about Chinese repression in Xinjiang, please see below.

Background on Chinese Repression in Xinjiang

Xinjiang, located in northwestern China, is home to 11 million Uyghurs and other predominantly Muslim ethnic minorities. The Chinese government has long imposed pervasive restrictions on the fundamental human rights, including freedom of religion, of Uyghurs in Xinjiang. These controls are often intrusive and personal, including, for example, restrictions on what name they may give their children.

Opposition to central and local government policies has been expressed in peaceful protests, but also through bombings and other acts of violence. Authorities seek to justify many repressive measures in the region as necessary to supporting the state’s fight against terrorism. However, the Xinjiang authorities have long conflated violent and nonviolent forms of political advocacy, and treat expressions of Uyghur identity, including language, culture, and religion, as well as aspirations for independence, as one of the “three [evil] forces” (三股势力) – “separatism, terrorism, and extremism.”

Since May 2014, the Chinese government has waged a “Strike Hard Campaign against violent activities and terrorism” (严厉打击暴力恐怖活动专项行动). Party Secretary Chen Quanguo, appointed in August 2016, seems to have intensified repressive practices under the campaign.

In the past year, Xinjiang authorities have expanded efforts at forced assimilation and at severing any foreign ties Muslim residents may have. These include: restricting foreign travel by recalling passports, forcing those living abroad to return, imprisoning those with foreign connections, strengthening the use of Mandarin language in education while deprioritizing minority languages, targeting minority officials suspected of disloyalty, and detaining indefinitely over tens of thousands in unlawful “political education” centers. Xinjiang authorities have also heightened surveillance efforts, including instituting mass collection of DNA and voice biometrics from individuals between ages 12 and 65, routinely inspecting smartphones for “subversive” content, creating numerous checkpoints on roads and train stations, hiring thousands of new security personnel, and building “convenient” police stations.