(Nairobi) – Most women and girls in the rebel-held Nuba Mountains of Sudan lack access to reproductive health care, including emergency obstetric care, Human Rights Watch said in a report released today. Their plight is one of the little known yet far-reaching effects of years of obstruction of aid to the area by the Sudanese government and armed opposition.

The 61-page report, “No Control, No Choice: Lack of Access to Reproductive Healthcare in Rebel-Held Southern Kordofan,” documents how women and girls cannot get contraception and have little access to health care if they face complications during pregnancy and childbirth. The parties to the six-year-long conflict, the Sudanese government and the rebel Sudan People’s Liberation Army-North (SPLA/M-North), have both obstructed impartial humanitarian aid.

“Women and girls in the Nuba Mountains are suffering and dying from years without access to life-saving humanitarian aid,” said Skye Wheeler, a women’s rights emergencies researcher at Human Rights Watch. “The Sudanese government and armed opposition need to put the people first, and should immediately smooth the way for impartial and independent aid agencies to reach the area.” 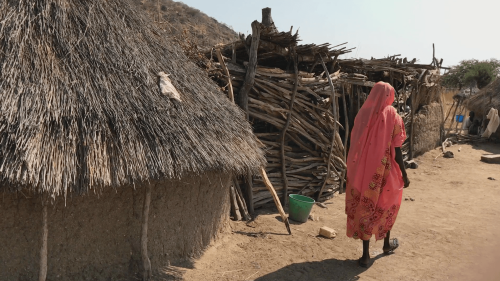 The Sudanese government, which has a long history of obstructing humanitarian aid to conflict zones, promised to improve aid access across Sudan before the United States government agreed to lift economic sanctions in January 2017. While the government appears to have eased access restrictions in some parts of the country, neither the government nor the rebel group has agreed to conditions for allowing aid into rebel-controlled parts of Southern Kordofan and Blue Nile states.

The United Nations and its members should investigate both parties’ obstruction of offers of impartial aid as a violation of international humanitarian law. The UN and others should consider individual sanctions against commanders or leaders determined to be responsible for clear obstruction of aid or any serious violations of international humanitarian law and human rights law.

The two sides have been fighting in both Southern Kordofan and Blue Nile states since 2011. Unlawful and terrifying airstrikes by the government on populated areas, along with food shortages, have pushed more than 200,000 people into refugee camps in South Sudan and displaced hundreds of thousands more within Sudan.

In December 2016, Human Rights Watch researchers interviewed 25 women in the Nuba mountains counties of Heiban, Delami, and Um Dorien about their access to health care, as well 65 local authorities, humanitarian and health workers, and other civilians.

No one in the rebel-held areas has had access to government health services or unhindered humanitarian aid since the conflict began. In mid-2014, Sudanese forces bombed in and around several health facilities in what appeared to be targeted attacks, shutting down two major facilities that provided emergency obstetric care and contraception. There are only five doctors for perhaps as many as 900,000 people and two functioning hospitals, both in Heiban county, which can be up to a two-day journey for many people. Active front lines sometimes make the hospitals entirely inaccessible. There are no ambulances in the rebel-held area and few civilian cars.

Most pregnant women have no prenatal care or must rely on local birth attendants without formal training, or trained midwives with no, or insufficient, equipment. When women and girls face complications during labor, they sometimes only reach care after many hours of travel by motorcycle, carried between two men, or transported on beds.

The lack of access to prenatal care, skilled health providers during delivery, and emergency obstetric care are risk factors for maternal deaths. In the most recent statistics available, the Sudanese government in 2006 put Southern Kordofan’s maternal mortality rate at 503 per 100,000 live births, compared with 91 in Northern state and 213 in Southern Kordofan’s neighboring Northern Kordofan state.

The little information available suggests that maternal mortality remains high. Local administration officials said that about 350 women died in 2016, and they suspected that most of them were pregnant. The Diocese of El Obeid’s Mother of Mercy Hospital documented two maternal deaths in 2016 and three in 2015 at their hospital, out of 260 to 280 births a year. Cap Anamur (German Emergency Doctors) recorded two maternal deaths at their hospital in 2016, out of 193 deliveries and six maternal deaths in women’s homes in areas near their outreach clinics. However, all the health workers Human Rights Watch interviewed said that they believe most women who die in pregnancy, including childbirth, do so at home, far from help.

Family planning is largely unavailable, making it difficult for women and men to protect themselves from sexually transmitted infections and for women to control their fertility. Three organizations and local authorities all reported that detected cases of syphilis and gonorrhea are increasing. In one facility, for example, gonorrhea cases jumped from 39 in 2013 to 896 in 2016. The Mother of Mercy Hospital in Gidel, which houses the area’s largest maternal health program, reported that 20 percent of pregnant women in their care tested positive for Hepatitis B.
The rebel SPLA/M-North civilian administration has maintained about 175 clinics in the area, but these do not regularly distribute contraception. German Emergency Doctors is the only organization consistently providing contraception in rebel-held areas, but local restrictions require women to obtain permission from their husbands.
“The women we spoke to wanted to space their children, in part because they were worried about food shortages,” Wheeler said. “But most of the women we interviewed did not know what a condom or contraception was or had never seen any.”
Sudan declared a unilateral ceasefire in June 2016 in Southern Kordofan, which it then extended to all conflict zones, and appears to have stopped aerial bombardments in 2017. The US decision to suspend economic sanctions will become permanent in July if Sudan shows progress on a number of fronts, including humanitarian access. The US should delay the decision, allow more time for Sudan to demonstrate progress, and monitor a wider set of human rights concerns. The UN should also step up its engagement on the conflicts. 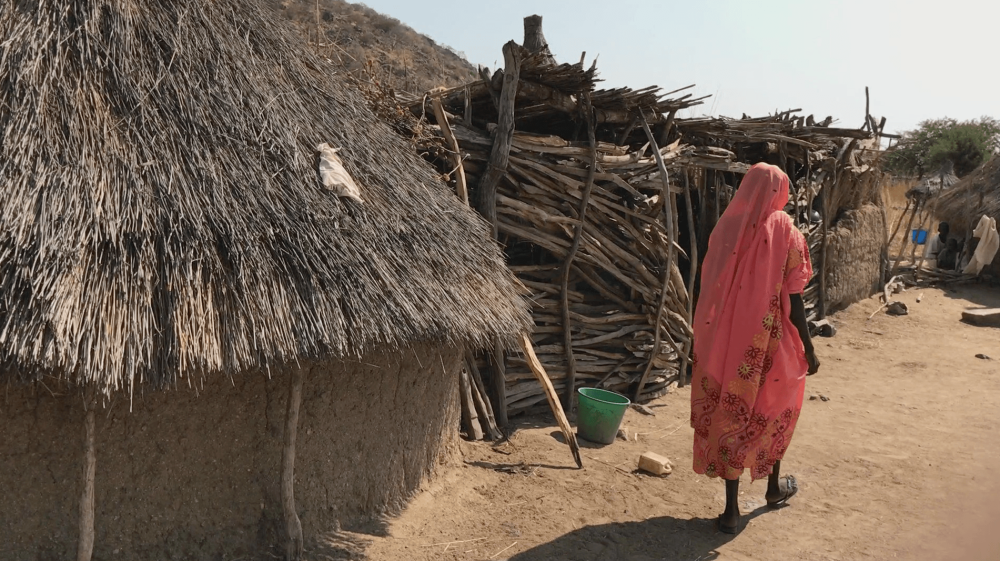 Wrapped in a pink, flower-embroidered cloth called tobe, her voice a mere whisper, Hassina tells her story – a story of pain, loss, and lack of control over her body and life.  &#13;

Read her story here
The UN Security Council issued a resolution in May 2012 threatening punitive measures if the parties did not allow aid to flow freely to Southern Kordofan and Blue Nile, but has taken no further action.
“The scrutiny from the UN Security Council on Sudan in 2011 and 2012 has given way to silence and non-action,” Wheeler said. “The UN and donors should urgently press the parties to allow them to provide desperately needed emergency assistance to civilians, including women and girls, in this long-neglected crisis.”
Selected Cases and Quotes
Hasina Soulyman:
Four years ago, after 14-year-old Hassina Soulyman, from Hadara village in Delami county, spent two days in labor at home, weak from loss of blood and falling in and out of consciousness, her family put her on a motorcycle – the only transport in her village – with two men holding her between them for a two-hour drive to a larger village. There they waited hours for a car to take her to one of only two hospitals in the rebel-held area of Sudan’s Southern Kordofan state. When she finally got there, a doctor delivered her stillborn baby by cesarean section and told Hassina that her cervix was too narrow to give birth vaginally.
Without adequate health information or access to contraception, Hassina became pregnant two more times. Her second baby was delivered at the hospital but died before turning six months old. During the last weeks of her third pregnancy, when she was 18, Hassina and her family fled her village to escape government bombing. She went into labor in the riverbed where her family was sheltering, and endured three days of obstructed labor, during which the body of the baby cleared the birth canal but the separated head was stuck in her womb before she could get transport to a hospital. As of December 2016, Hassina still did not have access to family planning assistance.
Amal Tutu:

“I had a miscarriage at five months, of twins. They came out and then there was a lot of bleeding, a lot of pain. There was no car, no painkillers. I had to walk to the hospital because the bleeding would not stop.”

— Amal Tutu, 30, from a village in Heiban County, a day’s walk from the nearest hospital.

“My aunt died in childbirth, they took her to the hospital and she died on the way with the baby in her womb, it was an hour by car.”