(The Hague) – The opening of the trial of Bosco Ntaganda on September 2, 2015, at the International Criminal Court (ICC) sends the message that elusive suspects in grave international crimes may someday be brought to justice, Human Rights Watch said today.

The ICC issued its first sealed arrest warrant against Ntaganda, a rebel commander at the time, in 2006 for alleged crimes committed in eastern Democratic Republic of Congo, but he evaded justice and continued to command troops responsible for atrocities until his surrender in 2013. Ntaganda’s appearance at the ICC is a victory for victims, their families, and human rights activists across Congo, Human Rights Watch said.

“Seeing Bosco Ntaganda in the dock sends a powerful message to others implicated in grave abuses in Congo that one day they too may be brought to justice,” said Geraldine Mattioli-Zeltner, international justice advocacy director at Human Rights Watch. “The long delay in apprehending Ntaganda shows the need for concerted international action in these cases.”

Ntaganda faces 13 counts of war crimes and 5 counts of crimes against humanity, for murder and attempted murder, attacks against civilians, rape and sexual slavery, the recruitment and use of child soldiers, pillaging, and persecution in northeastern Congo’s Ituri district in 2002 and 2003.

In 2012 and 2013, the Office of the Prosecutor expanded the charges against Ntaganda, which initially only included the recruitment and use of child soldiers. The updated charges are more representative of the grave crimes that he and troops under his command allegedly committed in Ituri, and it will open the door to justice for more victims and their families, Human Rights Watch said.

In the years after the hostilities in Ituri, Ntaganda joined other armed groups and continued to lead troops implicated in grave abuses in the Kivu provinces of eastern Congo. In January 2009, under a peace deal ending a previous rebellion, the Congolese government named him a general in the Congolese army. He remained in that post until he and others led a mutiny and created a new rebel group, the M23, late March 2012.

Following infighting within the M23, and the apparent loss of support from his backers in neighboring Rwanda, Ntaganda surrendered voluntarily to the United States embassy in Kigali, Rwanda, in March 2013 and requested to be transferred to the ICC.

The trial against Ntaganda at the ICC only relates to crimes allegedly committed in Ituri, leaving atrocities committed by troops under his command in North Kivu largely unaddressed at the ICC and before national courts. 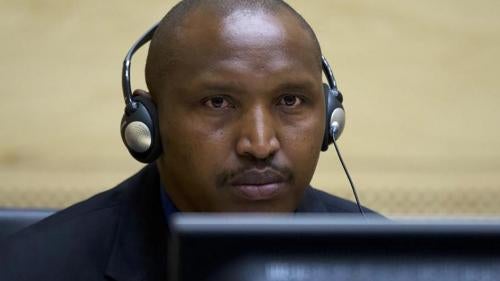 Research by Human Rights Watch, the United Nations Group of Experts, and other organizations over many years has clearly demonstrated that senior political and military officials in Congo, Rwanda, and Uganda provided important financial, military, and political support to abusive armed groups in Ituri and the Kivu provinces, fully aware that these armed groups were engaged in widespread violations of international humanitarian and human rights law.

To make a significant contribution to justice in Congo, the ICC prosecutor should go beyond local rebel commanders and also investigate the role of high-level officials and officers in Uganda, Rwanda, and Congo for their role in the crimes, Human Rights Watch said.

Other M23 rebel leaders with long histories of grave abuses are now in Rwanda and Uganda and have not faced justice. Without bringing other abusive commanders to justice in fair and credible trials, future abuses are more likely.

There is one outstanding Congo-related ICC arrest warrant against Sylvestre Mudacumura, the military commander of another armed group responsible for widespread abuses in eastern Congo, including ethnic massacres, rape, and the burning of homes. Mudacumura remains at large in eastern Congo. Congolese authorities and UN peacekeepers there should renew their efforts to arrest and transfer him to the ICC, Human Rights Watch said.

“Ntaganda’s blood-stained path to the ICC demonstrates the terribly high price that civilians pay for impunity,” Mattioli-Zeltner said. “ICC and Congolese authorities should redouble their efforts and work together to arrest and bring to justice others responsible for grave crimes and their backers who are complicit in them.”