The ancient mud-house city of Saada, under the control of Houthi rebels since 2011, was almost deserted when Belkis Wille arrived in late May to investigate damage caused by the Saudi Arabia-led coalition’s aerial bombing of Yemen. By that time, the scorched streets were dotted with craters but empty of people – most women and children had already fled, heeding Saudi warnings that the nine-country coalition now considered the entire city of 40,000 to be a military target.

As Belkis and her colleague Ole Solvang began asking those remaining about the air strikes, they heard one story over and over – the attack on a two-story, two-home residential building that killed 27 members of the al-Ibbi family, including 17 children. “Everyone kept telling us about it, because it was so dramatic,” Belkis recalls. “But also because the townspeople insisted that the father was just a simple retired barber, that his sons worked in the family’s two barber shops, and that they had no connection to the rebel Houthi forces.”

March 26 was the first day of the Saudi-led airstrikes, intended to oust the Houthis, who had taken over the capital, Sanaa, and much of the rest of Yemen. While many strikes hit military targets, others hit schools, a displaced persons’ camp, and a dairy factory, as well as civilian homes.

Belkis and Ole wrote their report, “Targeting Saada: Unlawful Coalition Airstrikes on Saada in Yemen,” to persuade the coalition member countries to take much greater care in identifying only military targets to attack, and to take all possible measures to reduce civilian harm. The war has already caused upwards of 1,400 civilian deaths, many caused by airstrikes. That coalition includes Bahrain, Jordan, Kuwait, Morocco, Qatar, and the United Arab Emirates. The US has said it provides intelligence and logistical support for the airstrikes.

As Belkis and Ole walked through the ruins of the al-Ibbi home, locals described the bombing and how they had pulled bodies from the rubble. “Two neighbors in particular were so distraught that they spoke over each other, shouting to be heard, trying to convey the horrific nature of the attack,” Belkis said. “They showed us a handwritten paper with the names and ages of the dead – the minute we saw the length of the list we realized it was a really terrible incident.”

The attack happened on May 5, two days before the Saudi military announced it would consider all of Saada a military target – a warning that was itself unlawful, since the laws of war, which govern the conduct of armed conflict, require warring parties to distinguish between civilians and combatants and to take all feasible precautions to minimize harm to civilians. Still, once warned, most of those who could afford the black-market fuel required to flee Saada left, as did most high-level Houthi commanders, leaving the once-beautiful city to the defense of foot soldiers living on canned tuna and condensed milk. 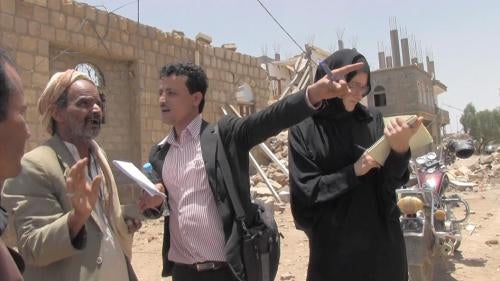 After a first bomb hit the neighboring cultural center, neighbors said, the second bomb hit a corner of one ground-floor apartment where the al-Ibbis were gathered – one of Walid al-Ibbi’s four daughters had just received a proposal of marriage. The first strike damaged the house but did not harm the terrified residents, who fled to seek shelter on the other side of the building – all except 35-year-old Walid al-Ibbi, who crossed instead to a neighbor’s house. As he banged on the neighbor’s door, two more bombs hit the house, almost destroying it. Only Walid, his father, Abdullah, and two brothers survived.

Walid met Belkis at the gate of a hospital in Sanaa, where his father was being treated for the injuries he sustained. They walked to a nearby garden, where Walid felt comfortable enough to tell his story. “He felt scared and completely hopeless – he doesn’t know what to do next, where to go, he’s not happy in Sanaa,” Belkis said. “He told me, ‘I don’t know anyone, it’s a really big city, but I have to stay for my father and brothers. I just want to go home.’ But then he looked down and said, ‘I don’t really know what I’m going home to.’”

He showed Belkis cellphone video shot by a neighbor showing his relatives’ bodies being pulled from the rubble, scenes of bloody horror from the hospital where Walid went through the names and ages of his dead relatives, and then photo portraits of his four daughters. “It seemed to me that this awful video is the only proof Walid has of this terrible wrong that’s been done to him, and he wants to show it because he has nothing else left,” Belkis said. “It was very difficult to watch because of all the small children – at one point a neighbor holds out a 2-month-old dead baby and she looks like a broken doll.”

Walid’s 25-year-old brother was released from hospital in Sanaa but his other brother is continuing to receive treatment. When Belkis last spoke to Walid his father was about to undergo surgery and doctors had warned there was a risk of further brain damage. She hasn’t been able to reach him since – perhaps his phone’s battery is dead because of power cuts.

“I sincerely hope that our work will lead the coalition, and the US and other countries that support the coalition, to ensure much greater care is taken to spare civilians from harm,” Belkis said. “Perhaps that’s too lofty a goal, but there is some comfort in helping Walid tell his story.  Now the world will know that he lost almost his entire family, that his daughter will never marry, that he has nothing left. And that’s one reason we do what we do.”