(New York) – The Department of Veterans Affairs (VA) should remove barriers to ensure access to evidence-based drug dependency treatment and make overdose prevention programs available to veterans in the community, Human Rights Watch said in a report released today. An estimated more than one million US veterans take prescription opioids for pain, and nearly half of them use the drugs chronically, yet drugs to treat dependence on pain medicines fail to reach tens of thousands of veterans in need.

The 39-page report, “No Time to Waste: Evidence-Based Treatment for Drug Dependence at the United States Department of Veterans Affairs,” compiles and analyzes findings from a wide range of sources about problems of drug dependency among veterans and the implications for treatment and assistance. Human Rights Watch found that alcohol and drug dependence are strongly associated with homelessness as well as with mental health conditions – including post-traumatic stress syndrome and depression – that affect 40 percent of Iraq and Afghanistan veterans in VA care. Drugs or alcohol are involved in one of three Army suicides, and the VA estimates that 22 veterans commit suicide each day.

“Hundreds of thousands of veterans are struggling with chronic pain, drug dependency, mental health conditions, and homelessness—conditions that are often deeply intertwined,” said Megan McLemore, senior health researcher at Human Rights Watch and author of the report. “The Department of Veterans Affairs has developed effective, evidence-based programs, but obstacles remain in policy and implementation to reach all veterans who need them.”

The report is based on interviews with dozens of veterans and their advocates, VA officials, and community service providers, as well as extensive review of government, academic, and other research. Human Rights Watch also reviewed and assessed the availability of a wide range of evidence-based programs – that is, programs that have been proven effective – to treat dependency and address veterans’ drug-related problems.

One of the report’s findings is the need to expand the availability of naloxone, an inexpensive prescription medication, used in emergency rooms for decades, that can reverse overdose from opioids such as heroin. The rate of death by accidental overdose among patients of VA facilities is nearly double that reported in the US as a whole. While the VA plans to make naloxone available nationwide through VA hospitals by the end of 2014, the VA should ensure all veterans who need to can access naloxone through community organizations and other means, even if they do not attend a VA hospital, Human Rights Watch said.

“Veterans are dying every day of opioid overdose,” McLemore said. “Those most in need may not be in the VA system, so it’s critical for the VA to commit to a community-oriented policy that reaches veterans who are most vulnerable and at risk. ”

No Time to Waste

Evidence-based drug dependency treatment programs also should be expanded. Although the prescription drugs methadone and buprenorphine are proven to be the most effective treatment  for  individuals dependent on opioids such as Oxycontin, Vicodin, or heroin, there is still lingering prejudice against making these universally available because they are also addictive and require careful supervision and regulation.  Military members often first receive potentially addictive prescription opioids from military physicians. The Army Surgeon General reported in 2010 that one in seven soldiers were prescribed Oxycodone, and between 2001 and 2009, pain prescriptions from military physicians quadrupled to nearly 4 million. Although VA policy recommends that medication-assisted therapy be available, the report documents resistance from doctors to prescribing medication-assisted therapy to veterans struggling with dependency on opioids as “substituting one drug [addiction] for another.”

Outside of the VA, similar objections result in underutilization of methadone and buprenorphine. Inconsistent and complex state Medicaid reimbursement regulations as well as requirements for physician involvement and training keep many community-based organizations and non-medical treatment facilities from providing methadone to veterans and others who need it.

Veterans told Human Rights Watch that without these programs, they would be unable to live in dignity or contribute to society. One Vietnam veteran said that “Before I started methadone, I was no more than the walking dead. Methadone gave me my life back.”

“Only one of three patients at the VA who need methadone or buprenorphine is getting it,” said McLemore. “We found that 38,000 VA patients don’t have access to the most effective treatment for their condition, and the VA needs to ensure that its own policies are implemented to make these medications available.

The report also examines a VA program for chronically homeless veterans, many of whom struggle with alcohol and drug dependence as well as mental health conditions, including post-traumatic stress syndrome and depression. Alcohol and drug dependence are strongly associated with homelessness, both among veterans and in the general population. Nearly 60,000 veterans are homeless on a given night, and as many as 400,000 veterans may experience homelessness or unstable housing at some point each year. Female veterans are the fastest growing segment of the homeless population in the United States.

Since 2008, the “HUD-VASH” program, a partnership between the VA and the Department of Housing and Urban Development, has provided permanent housing for nearly 60,000 chronically homeless veterans. In recent years this program has changed from a model that required veterans to prove their “readiness” for housing, usually through abstinence from drugs or alcohol, to a “Housing First” model that provides housing as the first step and then surrounds the individual with a range of supportive services.

VA reviews of the program show that the Housing First approach saves money in health care costs and allows the VA to reach the most vulnerable veterans – those who combine alcohol and drug dependence with mental health issues, Human Rights Watch said.

After pilot programs in 14 cities, the VA plans to use the Housing First model in all 100 HUD-VASH sites nationwide.

Under international human rights law, governments are obligated to protect the right to health, which includes applying evidence-based models to prevent disease and treat illness. A central element of that is ensuring access to overdose prevention, effective drug dependency treatment and, mental health care. Governments also have obligations to prevent homelessness and should pursue policies that enable vulnerable populations access to stable housing.

“The VA has adopted these evidence-based models because they are effective,” McLemore said. “But access to these services is also key to their right to health, and in practical terms can mean the difference between life and death.”

One veteran told Human Rights Watch that his buddy, an Iraq War veteran who regularly uses heroin, now carries his naloxone kit with him at all times. A veteran of the Iraq War said that without the HUD-VASH program, he would still be living in the subway, on the streets, or under bridges. “I’d probably be dead,” said one veteran of the Iraq war. “Now I’m in treatment and I’m doing okay.”

“Everyone, including veterans, should have access to effective medications for overdose prevention and drug treatment,” McLemore said. “These programs save lives and should be expanded to reach all veterans, within and outside of the VA health system.” 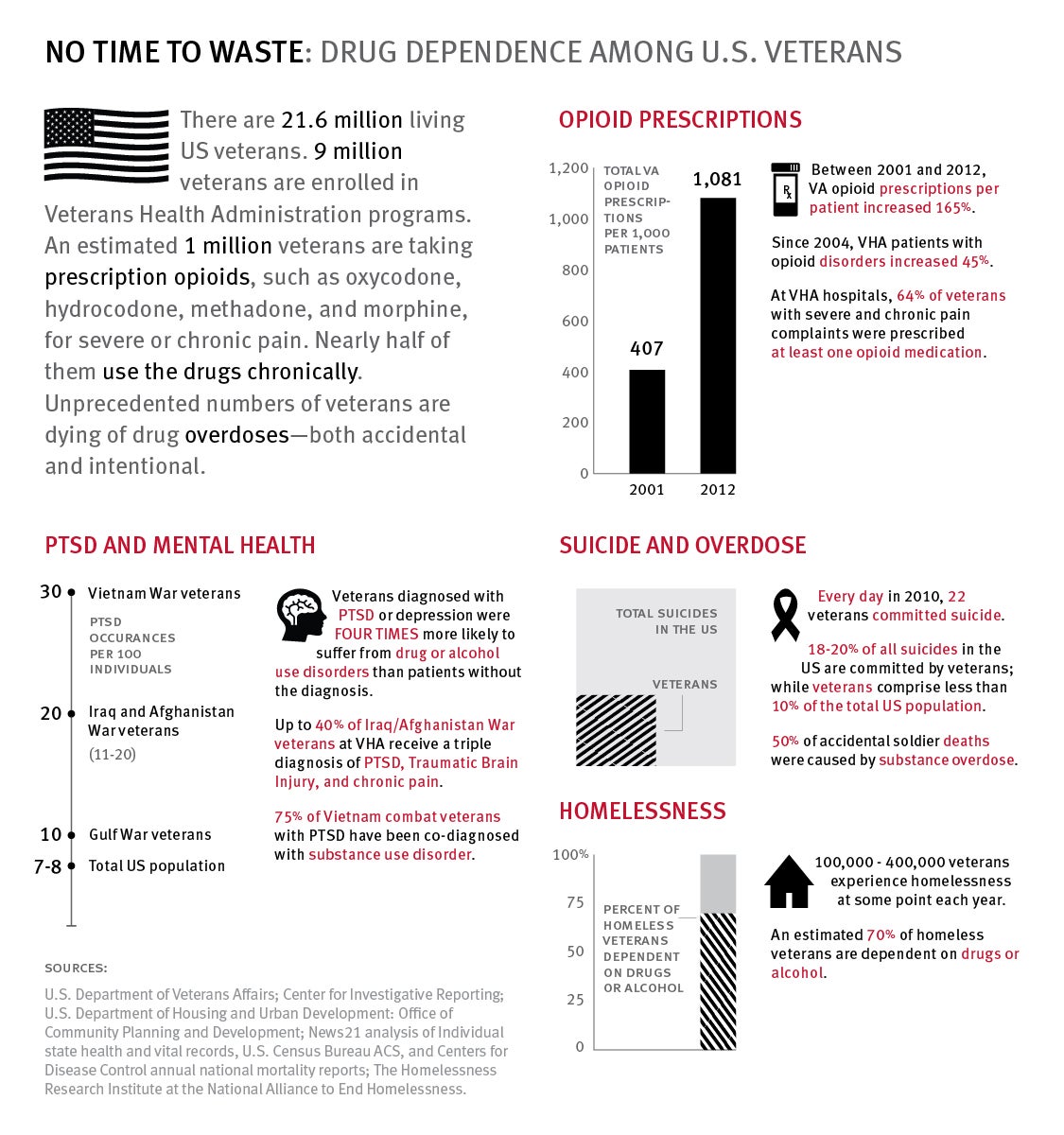