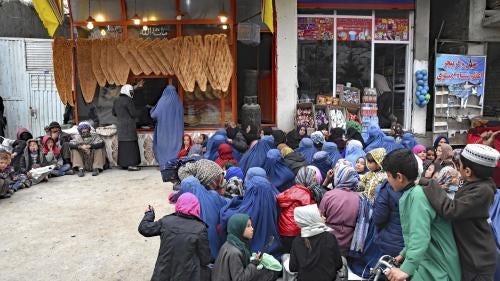 The Taliban, which took power in August 2021, continued to impose numerous rules and policies violating a wide range of fundamental rights of women and girls, including freedom of movement, right to work and a livelihood, and access to education and health care. Authorities also repressed or threatened the media and critics of Taliban rule, forced the closure of civil society organizations, and dismantled government offices meant to promote or uphold human rights.

Taliban security forces throughout the year carried out arbitrary detentions, torture, and summary executions of former security officers and perceived enemies, including security personnel in the former government or alleged members or supporters of the armed group Islamic State of Khorasan Province (the Afghan affiliate of the Islamic State, known as ISKP). ISKP carried out attacks on schools and mosques, mostly targeting ethnic Hazara Shia Muslims. Afghanistan’s criminal code makes same-sex conduct a criminal offense, and the Taliban have echoed the previous government’s support for the criminalization of same-sex relations, with some of their leaders vowing to take a hard line against the rights of lesbian, gay, bisexual, and transgender (LGBT) people.

A deepening economic crisis continued in 2022, underpinned by several factors, including massive cutoffs in donor assistance in 2021 and corresponding cuts to wages of essential workers; a massive liquidity crisis; spiking prices for essential goods like food; and restrictions by outside governments impacting the banking sector. Millions of children continued to face acute malnutrition. More than 90 percent of Afghans were food insecure throughout the year. Women and girls were particularly hard hit by the economic crisis for reasons, including Taliban actions pushing many women out of paid work and blocking female aid workers from being able to do their jobs.

Since taking power, the Taliban have imposed a long and growing list of rules and policies that comprehensively prevent women and girls from exercising their fundamental rights, including to expression, movement, work, and education affecting virtually all their rights, including to life, livelihood, shelter, health care, food, and water.

In March 2022, the Taliban announced that women and girls would continue to be barred from secondary education, a decision that drew widespread criticism and statements of concern from around the world, including from the entire membership of the United Nations Security Council, the Organisation of Islamic Cooperation, and almost all members of the G7 and G20.

The Taliban’s leadership, which is entirely comprised of men, has not permitted women to participate in governance at any level or hold any senior positions in the civil service, including as judges. Authorities announced and frequently enforced rules prohibiting women from traveling or leaving their homes, including to go to the workplace without a male family member accompanying them—an impossible requirement for almost all families—and barred women from holding most types of jobs. Authorities also announced rules requiring women’s faces be covered in public—including women TV newscasters—and stipulated that male family members will be punished when a women violate rules regarding movement and dress.

Taliban forces in several instances used excessive force to disperse women engaged in public protests against Taliban policies or rules, arbitrarily detained some protesters and their family members, and allegedly subjected some to torture or beatings.

Afghanistan’s humanitarian crisis worsened in 2022, largely because of the country’s enduring economic collapse in the wake of the Taliban takeover. Over 90 percent of the population remained food insecure through the year, including tens of millions forced to skip meals daily or endure whole days without eating. Persistent malnutrition has caused increased starvation deaths and longer-term health problems in children.

Multiple causes underpin the economic crisis. In 2022, most donor countries maintained cutoffs to income assistance and wages for essential workers providing health care, education, and other vital services. Resulting widespread wage losses coincided with increasing prices of food, fuel, and other essential goods. Agricultural output also decreased during 2022 due to a major drought and lack of affordable access to fertilizer, fuel, and other agricultural inputs.

US restrictions on the Central Bank of Afghanistan, also known as Da Afghanistan Bank (DAB), have continued to prevent the bank from carrying out essential central banking services, essentially keeping the entire economy in a state of collapse. DAB’s incapacities have caused a massive and enduring liquidity crisis, as well as shortages of banknotes in both US dollars and Afghan currency, severely restricting legitimate financial activities by businesses, humanitarian agencies, and ordinary Afghans.

Women and girls are disproportionately affected by the crisis and face greater obstacles to obtaining food, health care, and financial resources. Taliban policies barring women from most paid jobs made the situation worse, especially for households in which women were the sole or main wage earners. Where the Taliban has allowed women to work, doing so was rendered almost impossible by oppressive requirements such as having a male family member escort women to work and even remain there throughout the workday.

World Food Program surveys revealed that for most of 2022, nearly 100 percent of female-headed households lacked adequate food and almost all are taking “drastic measures” to obtain it, including selling vital household items, sending children to work, or marrying off young girls for dowry.

On September 14, 2022, the US government announced the creation of “The Afghan Fund,” a Swiss-based financial mechanism intended to act as a trustee for Afghanistan’s foreign currency reserves and conduct limited transactions and other activities in the place of DAB. However, several essential central banking services can still only be carried out by DAB, and economic impacts will continue until the US reaches an agreement with Taliban authorities about DAB’s status. Serious concerns remained about the Afghan Fund’s viability as a longer-term approach to address Afghanistan’s economic problems, and the delay in taking steps to stabilize the collapsed economy came at a steep human cost.

Taliban forces have carried out revenge killings and enforced disappearances of former government officials and security force personnel. They have also summarily executed people they claim are members of the Islamic State of Khorasan Province (ISKP). The United Nations Assistance Mission in Afghanistan (UNAMA) issued a report in August 2022 detailing numerous cases of killings or disappearances committed by Taliban forces since August 2021. It is not always possible to discern those killed were former government personnel or alleged ISKP.

In numerous cases over the year, Taliban forces conducted military operations and night raids targeting residents they accuse of harboring or providing support for ISKP members. During many operations, soldiers assaulted civilians and detained people without due process. Detainees were forcibly disappeared or killed, in some cases by beheading. In some provinces, Taliban authorities dumped bodies in public areas or hung bodies on streets or intersections as warnings.

In late 2021 and into 2022, residents in Nangarhar exhumed a mass grave in a canal that contained at least 45 bodies in various stages of decomposition, many with signs of torture or brutal executions: some had missing limbs, ropes around their necks, or had been beheaded.

The ISKP claimed responsibility for numerous bombings and armed attacks against Hazaras in 2022, which killed and injured at least 700 people. On April 19, ISKP claimed responsibility for a suicide bombing at a high school in Dasht-e Barchi, west Kabul, a predominantly Hazara and Shia area, which killed or injured 20 students, teachers, and staff.

ISKP also claimed responsibility for an attack two days later at Seh Dokan Mosque in Mazar e Sharif that killed 31 people and wounded 87 others. On April 27, unidentified gunmen killed five Hazara men on their way to the Dare-Suf coal mine in Samangan. On September 30, an attack on an educational center in west Kabul, again a Hazara dominated area, killed 53 and injured 100 students, mostly women and girls.

The Taliban’s failure to provide security to at-risk populations and medical and other assistance to survivors and affected families exacerbated the harm caused by the attacks.

Beyond their immediate devastation, the attacks exacted a severe long-term toll, depriving survivors and families of victims of breadwinners, often imposing severe medical burdens, and restricting their access to daily life.

Taliban authorities carried out extensive censorship and violence against Afghan media in Kabul and provinces. Hundreds of media outlets were shut down and an estimated 80 percent of women journalists across Afghanistan lost their jobs or left the profession since the Taliban takeover in August 2021.

The Taliban’s Directorate of Intelligence engaged in a pattern of threats, intimidation, and violence against members of the media, and were responsible for targeted killings of journalists. Authorities also banned outlets in Afghanistan from broadcasting international news programs, including Voice of America and the BBC, in Dari, Pashto, and Uzbek languages. Journalists covering women’s rights protests faced particular abuse. The Taliban also shut down websites of two media outlets.

Access to information has become very limited in Afghanistan and in many provinces, The Taliban ordered journalists to not report on a wide range of issues. Several journalists were beaten for trying to report on anti-Taliban protests, arbitrary detention, rising food prices, and other subjects the Taliban authorities deem too critical.

On June 7, the General Directorate of Intelligence (GDI) released a video of Afghan blogger Ajmal Haqiqi—well-known on YouTube—with bruises on his face and ostensibly under duress, apologizing for encouraging “prostitution” online and “insulting verses of the Quran.”

On May 24, Taliban authorities detained Mirza Hassani, director of Radio Sedai Aftab, at a checkpoint in Herat city, accusing him of supporting opposition groups. On May 10, GDI officials detained Khan Mohamad Sayal, a TV journalist in Urzugan, without explanation.

The Taliban have used various measures to silence media in Afghanistan, ranging from establishing restrictive guidelines to sending intelligence officials to meet with media staff and forcing media workers to confess to crimes.

The Taliban’s media restrictions have been particularly devastating for women journalists, who typically have had to work harder than their male counterparts to establish their careers in media in the face of sexism and security risks.

The United Nations Security Council passed a resolution in March 2022 extending the United Nations Assistance Mission for Afghanistan (UNAMA) and its mandate to report on human rights conditions. The UN Human Rights Council in Geneva renewed and strengthened the mandate of the UN special rapporteur on Afghanistan in October.

The Security Council held numerous debates on Afghanistan and extended several sanctions and removed exemptions that had been granted to some Taliban officials who are under travel bans.

Key donors, including the United States, European Union, United Kingdom, and Japan continued to maintain restrictions on donor assistance and took inadequate steps to ensure that legitimate banking transactions involving Afghanistan are not restricted by UN or bilateral sanctions on Taliban officials. Like-minded governments with concerns about Taliban human rights abuses—including those that have committed to having a feminist foreign policy—failed to adopt a common and sustained multilateral position and strategy for pressuring the Taliban to change its conduct.

The prosecutor of the International Criminal Court (ICC) continued to request permission from the court’s judges to resume an investigation into war crimes and crimes against humanity, following a 2020 request from the former Afghan government to defer to their own investigations. As the ICC is a court of last resort, the ICC prosecutor can only override a deferral request of this kind by petitioning the judges. In an August 2022 submission, the prosecutor argued that the Taliban, which now controls the country, “are not continuing, cannot continue and will not continue” relevant national justice efforts.