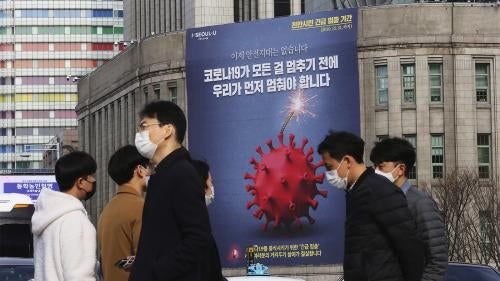 The South Korean government, a democracy, largely respects most political, civil, and socio-economic rights but significant human rights concerns remain. Discrimination against women is pervasive, as is discrimination against lesbian, gay, bisexual, and transgender (LGBT) people, and racial and ethnic minorities. The government has also maintained or imposed several excessive restrictions on freedom of expression, association, and peaceful assembly. In 2020, South Korea implemented important public health measures to protect against the spread of Covid-19, but aspects of its response raised serious privacy rights concerns.

In March, the government managed to lessen the impact of the Covid-19 pandemic in South Korea by adopting massive testing, data-intensive contact tracing, and promotion of social distancing. The government used cell phone location data, CCTV cameras, and tracking of debit, ATM, and credit cards to identify Covid-19 cases, and created a publicly available map for people to check whether they may have crossed paths with people with the virus. However, some of these measures infringed upon the right to privacy.

Health authorities sent out cell phone notifications to large numbers of people containing detailed information on confirmed Covid-19 cases, including age, gender, and places visited before being quarantined. The extensive personal information made public to assist in tracing also allowed people to identify infected persons, which led to public harassment and “doxing.”

In March, the National Human Rights Commission of Korea criticized authorities for these practices. In June and October, the Center for Disease Control and Prevention issued guidance not to publish patient age, sex, nationality, workplace, travel history, or home residency location, although some local governments still disclose some individual travel histories despite being directed against it. Concerns related to the collection and processing of sensitive personal information, which can reveal intimate information like a person’s sexual orientation and private relations, remained.

In 2020, over 6 million students enrolled in pre-school, primary, and secondary schools were impacted by school closures, according to United Nations estimates. The Ministry of Education minimized learning disruptions by relying on the country’s IT infrastructure and providers to deliver distance learning at scale and delayed the start of the school year by five weeks to minimize the loss of instruction time.

The LGBT rights movement in South Korean grew but hostility and severe discrimination persisted, especially in the armed forces. On January 22, 2020, the South Korean military discharged Byeon Hee-su, a transgender soldier who had undergone gender affirming surgery but wanted to continue to serve. The Constitutional Court is also currently reviewing the 1962 Military Criminal Act, which punishes sexual acts among soldiers with up to two years in prison under a “disgraceful conduct” clause, regardless of consent.

In early May, as bars and other venues reopened following a decline in Covid-19 cases, dozens of new cases appeared, linked to nightclubs in Seoul. Some media described the nightclubs as gay clubs, setting off a firestorm of online harassment and intimidation against LGBT people.

Discrimination against women is widespread in South Korea. Relatively few women occupy decision-making positions. There is a 35 percent wage gap between men and women. The Economist magazine’s “Glass Ceiling Index,” which evaluates women’s higher education attainment and numbers of women in managerial positions and in parliament, gives South Korea the lowest rank among countries that belong to the Organization for Economic Co-operation and Development (OECD).

On April 11, 2019, South Korea’s Constitutional Court ordered the National Assembly to rewrite laws governing abortion, which are punitive and harmful to women and girls, and decriminalize the procedure by the end of 2020. On October 7, 2020, the South Korean government announced new draft legislation that would permit abortion up until 14 weeks and, in some circumstances, up to 24 weeks, but would continue to criminalize abortion outside these exceptions.

South Korea’s #MeToo movement continued to gain ground in 2020 with several high-level local officials exposed for sexual violence, including former Seoul Mayor Park Won-soon, known as a women’s rights champion, who died by suicide on April 7, two days after his former secretary had filed a police report saying he sexually harassed her for four years.

The government continued to struggle to address rampant problems with online gender-based violence, including non-consensually shared intimate images and molka—secretly filmed video or images of a sexualized nature posted online. On July 2, 2020, an appeal court imposed a one year jail term on Choi Jong-bum, the former boyfriend of Goo Hara, a Korean pop star whom he had blackmailed with sex videos and who died by suicide in 2019.

In March 2020, Korean police zeroed in on a network of chat rooms on the messaging app Telegram, where users were viewing, sharing, and trading non-consensual images of dozens of women and girls, including of acts of sexual violence, obtained through coercion and blackmail, and prosecuted several chat room operators. Within a month, 2.7 million people signed a petition demanding authorities release the identities of the chat room operators and all participants.

As of August 31, around 1,000 suspects were under investigation in the Telegram scandal, mostly men under 40. The exact scale of these alleged crimes is unknown, but according to the Korea Cyber Sexual Violence Response Center, there were 260,000 users of 56 chat rooms on Telegram in which abusive content was shared.

On April 29, as part of measures to establish a “zero-tolerance” policy, the National Assembly passed bills to make digital sex crimes easier to prosecute. Under the new law, those who possess, buy, store, or watch illegally filmed sexual content can be sentenced to three years in prison. Before the new legislation was enacted, it was not illegal to possess such content.

In 2020, tensions between the South Korean government and human rights activists working on rights issues in North Korea sharpened significantly. On June 4, a few days after a human rights group sent 500,000 information leaflets into North Korea by balloon, Kim Yo Jong, the sister of North Korean leader Kim Jong Un, issued a statement demanding that South Korea “make a law” to ban the sending of leaflets and made threats of retaliation. For decades, the government had allowed groups to send leaflets with messages, considering the acts allowable freedom of expression and signals of support to North Koreans. But hours after Kim’s statement, the South Korean government announced plans to prohibit leafleting, saying they can “raise tension in the border area.”

On June 11, the South Korean government announced that authorities had initiated processes to revoke the registration of two groups that regularly sent leaflets and food into North Korea by balloon or by plastic bottles put to sea. In July, the government canceled the operation permits of the two groups, and announced that the 25 groups working on North Korea human rights issues or assisting defectors, registered as businesses with the Unification Ministry, would have to undergo “office inspections.”

Authorities also sent notice of an administrative review of the registration status of 64 groups registered with the ministry as “non-profit private organizations” working in similar sectors. On July 22, a coalition of 25 organizations working on North Korean human rights and supporting North Koreans living in South Korea issued a joint statement rejecting office inspections. The coalition called the government’s actions discriminatory, lacking in transparency, and intended to provoke fear and self-censorship among the human rights community working on North Korea.

South Korea joined the International Labour Organization (ILO) in 1991 but has only ratified four of the ILO’s eight core conventions. On July 7, the cabinet approved the Labor Ministry’s motion for parliamentary ratification of three ILO conventions on freedom of association, the right to organize and collectively bargain, and the prohibition of forced labor.

On September 3, the Supreme Court overturned a problematic 2013 decision outlawing the Korean Teachers and Education Workers’ Union, and restored the union’s legal status.