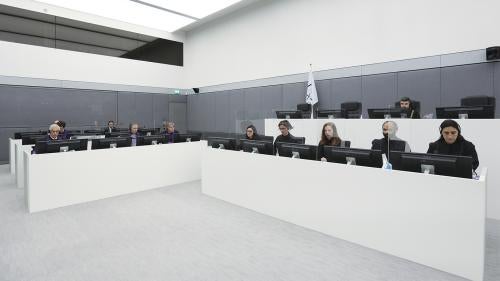 There was limited improvement in protections of human rights in Serbia in 2020. Journalists faced threats, violence, and intimidation, and those responsible are rarely held to account. Efforts to prosecute war crimes continued to focus on low-level perpetrators. People with disabilities continued to be placed and reside long term in institutions. Attacks and threats against lesbian, gay, bisexual and transgender (LGBT) people continued.

Attacks and threats against journalists remained a concern and were met by inadequate response from Serbian authorities.

Between January and late August, the Independent Journalists’ Association of Serbia (NUNS) registered 28 physical attacks and 33 threats or intimidation against journalists.

In September, the Appeals Court in Belgrade overturned the 2019 convictions of four defendants accused of the 1999 murder of prominent journalist and editor, Slavko Curuvija.

While reporting on a protest against Covid-19 restrictions in July, BETA news agency journalist Zikica Stevanovic was beaten by several police officers, including by baton to the head despite him showing his journalist ID, according to NUNS. Stevanovic’s beating was under investigation at time of writing. NUNS also reported that while covering the same protest, journalist Igor Stanojevic was beaten by police and arrested despite showing his journalist ID. He was charged with allegedly throwing stones at police and resisting arrest.

Between January and August, the War Crimes Prosecutor Office launched two new investigations and issued two indictments against a total of four individuals. An appeals court in Belgrade convicted one low ranking official of war crimes. The first instance court in Belgrade convicted three people for war crimes in the same time period. As of August, 34 cases against 188 individuals were under investigation and 14 cases against 36 defendants were pending before Serbian courts.

In September, a Belgrade court issued an arrest warrant for a bailed former soldier Rajko Kozlina, after he failed to surrender in June for his 15-year prison sentence for killing civilians during the 1998-1999 Kosovo war. His conviction and sentence in December 2019 were upheld on appeal in June.

In March, the Belgrade Appeals Court upheld the conviction of Nikola Vida Lujic, a former member of Serbia’s Red Berets special forces unit, sentencing him to eight years for a wartime rape of a woman in the village of Brcko in Bosnia in 1992.

The first trial in Serbia for war crimes in Srebrenica was marred by further delays, because the defendants, who are not being held in custody during the proceedings, failed to show up in court. Eight Bosnian Serb former police officers resident in Serbia are charged with the killing of more than 1,300 Bosniak civilians in July 1995. The trial has been postponed 18 times since it began in December 2016 because the accused claim to have poor health.

Following a meeting with Kosovo Prime Minister Avdullah Hoti in July, Serbian President Aleksandar Vucic offered to cooperate with Kosovo’s government to identify the location of missing persons from the 1998-1999 war in Kosovo.

Between January and August, Serbia registered 2,084 asylum seekers, significantly down from 6,156 asylum seekers during the same period in 2019. Afghans comprised the largest national group in 2020. UNHCR estimates of the numbers of asylum seekers and migrants in government centers were also down to 4,050 in August from 5,420 the previous year.

The asylum system continued to be flawed, with difficulties for asylum seekers accessing procedures, low recognition rates compared to EU averages, and long delays before decisions are made. Between January and August, Serbia registered 56 asylum applications, granting refugee status to 9 and subsidiary protection to 7. Over the past decade, Serbia has granted refugee status to a total of only 78 people and subsidiary protection to 96.  In mid-October, 6 out of 16 government-run camps were overcrowded.

By end of July, 37 unaccompanied children were registered with Serbian authorities, the majority from Afghanistan, compared to 437 during the same period in 2019. Serbia still lacks formal age assessment procedures for unaccompanied children, putting older children at risk of being treated as adults instead of receiving special protection.

In its first report on Serbia, the group of experts responsible for monitoring implementation of the Istanbul Convention on Preventing and Combating Violence Against Women and Domestic Violence noted ongoing gaps in services and obstacles to accessing help for survivors of violence against women and girls, particularly for rape and sexual assault, and called on the government to take urgent action to address gender stereotypes and promote equality.

In July, Serbia and Kosovo resumed the European Union-brokered dialogue on improving relations, stalled since November 2018, but failed to make specific commitments on strengthening protection of human rights.

Council of Europe Human Rights Commissioner Dunja Mijatovic in July called on Serbian authorities to investigate police violence against protesters during the July demonstrations in Belgrade against government Covid-19 restrictions.

After an April intervention by OSCE Representative on Freedom of the Media Harlem Désir, the Serbian government promptly withdrew a March decision to limit media access to information during the Covid-19 pandemic.

The October EU Commission progress report said Serbia should ensure the independence of its human rights institutions. The report noted serious concerns regarding intimidation, threats, and violence against journalists and the LGBT community and called on authorities to promptly investigate and penalize perpetrators.

The first tranche of indictments issued by prosecutors attached to the Hague-based Specialist War Crimes court for Kosovo marked long-awaited progress towards justice for grave violations of international human rights and humanitarian law, as well as the laws of war. Journalists faced threats and intimidation, and prosecutions of crimes against journalists have been slow. Tensions between Serbs and Kosovo Albanians continued, particularly in the north. Roma, Ashkali, and Balkan Egyptian communities continued to face discrimination.

In November, President Hashim Thaci was among four former senior members of the Kosovo Liberation Army (KLA) indicted for war crimes and crimes against humanity. The charges—which relate to the period during and just after the 1999 Kosovo war — were brought by the Hague-based Specialist Prosecutor’s Office. Thaci resigned and all four were transferred to detention facilities in The Hague and had their first court appearances, pleading not guilty. The prosecution accused Thaci and the other defendants, Kadri Veseli, Rexhep Selimi and Jakup Krasniqi, of extensive witness intimidation and charged two men from the KLA’s War Veterans Organization with leaking the names of witnesses. In September, another KLA commander, Salih Mustafa, was indicted and arrested for war crimes.

A Prizren court in June found a former Yugoslav police reserve officer guilty of war crimes against ethnic Albanians in the village of Mala Krusha in March 1999 and sentenced him to 22 years imprisonment.

The United Nations human rights expert on Hazardous Waste in September called out the UN for repeatedly failing victims of lead poisoning in camps for displaced persons run by the UN Mission in Kosovo (UNMIK). The Human Rights Advisory Panel (HRAP), an independent international body set up to examine complaints of abuses by UNMIK, in 2016 found violations against members of displaced communities and recommended the UN pay individual compensation and apologize to victims—the UN has done neither. Since its establishment in 2017, only one state had contributed to the voluntary UN trust fund set up for community assistance projects not specifically targeted by lead poisoning. Victims are displaced members of the Roma, Ashkali, and Balkan Egyptian communities.

A comprehensive survey of Roma, Ashkali, and Balkan Egyptians in Kosovo published by the Organization for Security and Cooperation in January, concluded that the majority of members of these communities face high unemployment, poor housing, and experience discrimination, particularly women. It reported some improvement in access to education, which has traditionally been inadequate.

The trial against six defendants charged with the January 2018 murder of Kosovo-Serb politician Oliver Ivanovic started in February. Four defendants are accused of having been part of a criminal group that organized the murder of Ivanovic. Two defendants were Kosovo policemen. All entered not guilty pleas. Ivanovic was shot dead by unknown assailants outside his office in Mitrovica, northern Kosovo.

Domestic violence remained a problem in Kosovo with an inadequate police response, few prosecutions, and continued failure by judges to issue restraining orders against abusive partners.

A 2018 mechanism set up to help provide financial compensation for the estimated 20,000 wartime survivors of sexual violence, continued to have limited reach. Between February 2018 and June 2020, around 1,239 survivors sought financial compensation, with 800 approved and 239 rejected, and the remaining pending at time of writing.

During the first 9 months of the year, the United Nations High Commissioner for Refugees registered 245 voluntary returns of members of ethnic minorities to Kosovo from other countries, up from 115 during that period in 2019.

In June, 40 local civil society organizations condemned threats and smear campaigns against rights activist Shkelzen Gashi, fired as advisor to then-Prime Minister Albin Kurti after saying that individual members of the Kosovo Liberation Army had committed crimes during and after the war.

Hate speech on social media against lesbian, gay, bisexual and transgender (LGBT) rights activists continued. The Centre for Equality and Liberty of the LGBT Community in Kosovo (CEL) in October expressed concern about the frequency of homophobic comments and hate speech against LGBT people by high ranking politicians, particularly on social media.

Journalists continued to be targets of intimidation, threats on social media, and physical attacks. Investigations and prosecutions have been slow.

Between January and September, the Association of Journalists of Kosovo registered eighteen cases of threats and violence against journalists and media outlets, including five physical attacks on journalists and ten threats. Police were investigating four of the registered cases at time of writing.

In April, the director of TV Plus, Nenad Milenkovic, was physically attacked in North Mitrovica by four masked, unknown assailants, in what is believed to be actions linked to his reporting. Police were investigating at time of writing.

The US and European governments consistently supported the EU-funded Kosovo special court but efforts by the US government to broker a stabilization agreement between Kosovo and Serbia did not address human rights concerns. Council of Europe Human Rights Commissioner, Dunja Mijatovic, called on states of former Yugoslavia to take the protection of war crimes’ witnesses seriously and to ensure that no witness has to fear for their life when testifying in a war crimes case.

In July, the EULEX rule of law extended by one year due to the Covid-19 pandemic. In April, EULEX reinforced its commitment to establish the fate of over 1,640 persons who disappeared during the war and who are still unaccounted for.

EU Enlargement Commissioner Oliver Varhelyi told the new Kosovo government that reform efforts are needed to strengthen the rule of law and tackle corruption, but failed to raise other outstanding human rights concerns.

The European Commission October progress report stated that the judiciary remained vulnerable to political pressure and that witness protection mechanisms faced challenges as people have a low trust in authorities keeping them safe. The report raised concerns of continued threats and intimidation against LGBT people, and the inadequate measures to integrate Roma, Ashkali, and Balkan Egyptian communities.