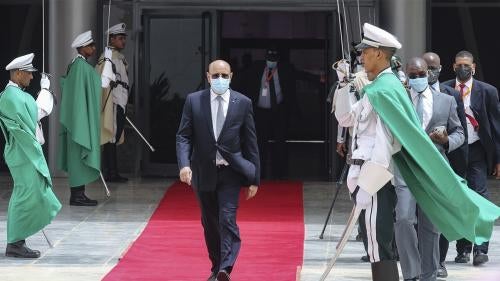 In his first year in office, President Mohamed Ould Ghezouani did not progress in overhauling existing repressive laws on criminal defamation, spreading “false information,” cybercrime, and blasphemy that authorities use to prosecute and jail human rights defenders, activists, journalists, and bloggers.

Parliament adopted an overly broad Law on Combatting Manipulation of Information that stipulates fines and harsh prison sentences for publication of “false news” and the creation of fake digital identities.

Slavery in certain forms has not been eliminated despite multiple laws banning it and specialized courts to prosecute those who subject people to slavery.

Parliament has yet to pass a draft law on violence against women and girls introduced in 2016.

Prosecutors use repressive legislation that includes criminal defamation and broad definitions of terrorism and “inciting racial hatred” to censor and prosecute critics for nonviolent speech.

Article 348 of the criminal code provides for punishment of six months to five years in prison for defamation. An anti-discrimination law adopted in 2017 states in article 10, “Whoever encourages an incendiary discourse against the official rite of the Islamic Republic of Mauritania shall be punished by one to five years in prison.”

Parliament adopted on June 24 the Law on Combatting Manipulation of Information that states as its objective to prevent manipulation of information, publication of false news, and the creation of fake digital identities. Adopted as authorities were battling surging Covid-19 cases, the law also seeks to suppress manipulation of information “especially during periods of elections and during health crises.” Penalties for violations range from three months to five years in prison, and fines from 50,000 to 200,000 Ouguiya (US$1,325-5,300).

On April 13, authorities arrested Mariem Cheikh, an activist and member of anti-slavery campaign group Initiative for the Resurgence of the Abolitionist Movement (IRA), for her criticism of continued slavery and racial discrimination in Mauritania. The public prosecutor in Nouakchott charged her for “racist comments through social media.” Authorities released her on April 21.

On June 3, authorities arrested Eby Ould Zeidane, a journalist and member of the Advertising Regulatory Authority, over a Facebook post calling for the Muslim holy month of Ramadan to be observed on fixed dates according to the Gregorian calendar, contrary to Muslim tradition. Authorities on June 8 charged him with blasphemy under penal code article 306, which carries the death sentence, and for "publishing leaflets that undermine the values of Islam" under article 21 of the Cybercrime Law. Zeidane was released on June 8, and on July 2 publicly repented his remarks after meetings with religious scholars and the Minister of Islamic Affairs.

The ministry has withheld recognition from several associations that campaign on controversial issues, such as the Initiative for the Resurgence of the Abolitionist Movement (IRA). Members of the IRA, including its leader Biram Dah Abeid, have been subject to arrests and harassment.

Authorities in February arrested 14 people who were present during an inaugural meeting of the newly founded Alliance for the Refoundation of the Mauritanian State (AREM) after they held a meeting, in Nouakchott. AREM calls for reforming the Mauritania’s public administration and health systems and rejects the country’s caste system. Authorities soon after released all but five of them, who remained in provisional detention from February 26 until their trial on October 20.

The Nouakchott West Criminal Court on October 20 found all five detained men guilty of “violating the sanctity of God” based on article 306 of Mauritania’s penal code and sentenced them to between six and eight month prison terms, and fines of 2,000 Ouguiya ($53) and 15,000 (about $400). Ahmed Ould Heida and Mohamed Fal Ishaq, who were sentenced to six months, were released due to time already served, and Ahmed Mohamed Al-Moctar, Mohamed Abdelrahman Haddad, and Othman Mohamed Lahbib were sentenced to eight months and were released on October 26. The court sentenced in absentia the remaining three men to prison terms of six months and one year and ordered them to pay fines.

Mauritania abolished slavery in 1981—the world’s last country to do so—and criminalized it in 2007. The Global Slavery Index, which measures forced labor and forced marriage, estimates that in 2018 there are 90,000 people living in “modern slavery” in Mauritania, or 2.4 percent of the population, while 62 percent are “vulnerable” to modern slavery.

Three special courts that prosecute slavery-related crimes have tried a handful of cases since their creation under a 2015 law.

According to the 2020 US State Department Trafficking in Persons Report, Mauritania investigated one case, prosecuted three alleged traffickers, and convicted five traffickers. According to the same report, no slave owners or traffickers were held in prison, and ten appeals cases remained pending at the three anti-slavery courts. The government did not report any prosecutions or convictions of government officials who were accused of corruption in relation to human trafficking and hereditary slavery offenses.

Adults and children from traditional slave castes in the Black Moor (Haratine) and Afro-Mauritanian communities remain exposed to hereditary slavery practices such as forced labor without pay as domestic servants or farm laborers.

Mauritania imposes the death penalty for a range of offenses, including, under certain conditions, blasphemy, adultery, and homosexuality. A de facto moratorium remains in effect on capital punishment since 1987 as well as on corporal punishments that are inspired by Islamic Sharia law and found in the penal code.

The 2017 law on reproductive health recognizes reproductive health, including family planning, as a universal fundamental right, but Mauritania continues to outlaw abortion per article 22 of the law and article 293 of the penal code. The country’s General Code on Children’s Protection, also adopted in 2017, criminalizes female genital mutilation, but it remains prevalent in some communities.

Mauritanian law does not adequately define the crime of rape and other forms of sexual assault, although a draft law on violence against women and girls with more specific definitions was pending before parliament. Moreover, women and girls who report rape risk being prosecuted for having sexual relations outside of wedlock if the authorities do not believe them.

Article 308 prohibits homosexual conduct between Muslim adults and punishes it with death for males by public stoning. If between two women, then the law prescribes imprisonment for three months to two years and a possible fine. There were no publicly known cases of persons sentenced to death in 2020 or in recent years for homosexual conduct.

The Court of Appeal in Nouakchott on March 4 confirmed the conviction of eight men for “committing indecent acts” and “inciting debauchery,” but reduced their sentences to six months in prison. Authorities arrested the eight after a video appeared online in January of them celebrating a birthday at a restaurant. Police described the men in the report they submitted to court as “imitating women” and “sodomizers,” based on their appearance and behavior. The appeals court gave seven of the defendants suspended sentences and the eighth man two months in prison, which he served. One woman received a one-year suspended sentence for participating in “inciting debauchery” by being present at the event.

On May 3, authorities arrested blogger and journalist for the news site Alakhbar.info, Mommeu Ould Bouzouma, over a tweet in which he characterized the authorities’ enforcement of the government-mandated Covid-19 lockdown in the district of Tiris Zemmour as “erratic.” Authorities released Bouzouma on May 15 after the governor of the region dropped the complaint against him.

Mauritania is a member of the G5 Sahel, an alliance of five countries headquartered in Nouakchott that cooperate on security, including counterterrorism.

In February, Mauritania assumed the rotating presidency of the G5 Sahel. In April, the European Commission pledged €194 million in additional support for “security, stability and resilience in the Sahel” that included strengthening “the security and defence capabilities of the G5 Sahel countries, while ensuring respect for human rights and international humanitarian law.”