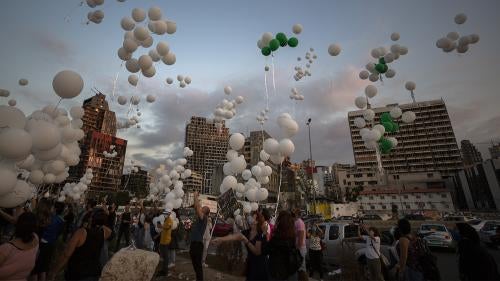 In 2020, Lebanon endured multiple crises, including a massive explosion in Beirut’s port, an economic collapse, rising political instability, and the Covid-19 global pandemic, all of which endangered residents’ basic rights. The Lebanese political class failed to adequately address any of these crises, some of which were of their own making.

The Lebanese Pound has lost 80 percent of its value since October 2019, eroding people’s ability to access basic goods, including food, shelter, and healthcare. The Covid-19 pandemic compounded poverty and economic hardship.

The economic crisis and the Covid-19 pandemic severely affected the medical sector, endangering the ability of hospitals to provide life-saving care. Electricity blackouts became widespread, lasting up to 22 hours per day in the summer.

On August 4, a massive blast in Beirut’s seaport devastated the city killing almost 200 people, injuring more than 6,000, and leaving 300,000 people without shelter. Prime Minister Hassan Diab’s government resigned shortly thereafter. Saad Hariri was nominated to be the country’s prime minister on October 22, nearly one year after he resigned from the post amid popular protests.

There are approximately 1.5 million Syrian refugees in Lebanon, of whom about 78 percent lack legal status, an increase from the previous year. The situation of migrant domestic workers, who are subject to the restrictive kafala (sponsorship) system and are excluded from labor law protections, has worsened amid the economic crisis and Covid-19 pandemic. 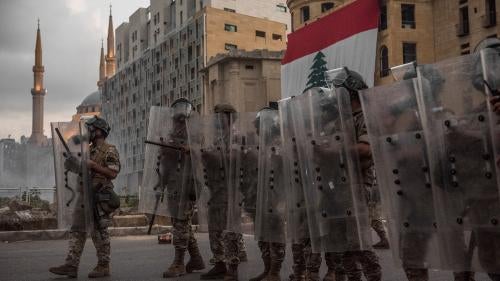 On August 4, a huge explosion at the Beirut seaport devastated the city. The explosion impacted Lebanon’s food supply, as Lebanon imports 85 percent of its food, and the port previously handled around 70 percent of the country’s imports. The explosion affected 163 public and private schools and rendered half of Beirut’s healthcare centers nonfunctional.

President Michel Aoun and then-Prime Minister Hassan Diab said the explosion was caused by 2,750 tons of ammonium nitrate that had been stored in a warehouse in the Beirut port for over six years without appropriate safety precautions. The circumstances that led to the detonation of the material are not yet clear. Media reports claimed that many high-level officials were aware of the existence of the ammonium nitrate but failed to act.

Lebanon’s economy has long depended on a regular in-flow of US dollars, and the Central Bank has pegged the Lebanese pound to the US dollar at an official exchange rate of 1,507.5 Lebanese pounds since 1997. Over the last 10 years, as economic growth slowed and remittances from the Lebanese diaspora have decreased, the quantity of dollars in circulation has declined. An increasing lack of confidence in the stability of the Lebanese pound in 2019 and concerns about the stability of the banking sector led depositors to withdraw from dollar accounts, making dollars increasingly scarce and causing the unofficial exchange rate to hit 8,000 Lebanese pounds in September.

In November 2019, months before the threat of Covid-19 became apparent, the World Bank predicted that the portion of Lebanon’s population below the poverty line would rise from 30 to 50 percent in 2020. Some Lebanese economists estimate that this figure has drastically increased.

As the Lebanese pound depreciates, the price of basic goods, most of which are imported, is rapidly increasing, eroding people’s ability to afford food, shelter, and healthcare. The Covid-19 pandemic compounded the poverty and economic hardship many faced, and disproportionately affected marginalized groups, including low-income families, people with disabilities, migrants, refugees, and lesbian, gay, bisexual, and transgender (LGBTQ) people. The government did not develop a timely, robust, or coordinated plan to help.

The financial crisis has thrown Lebanon’s healthcare sector into crisis. Hospitals are struggling to provide patients with urgent and necessary life-saving medical care due to the government’s failure to provide private and public hospitals with the funds it owes them. In addition, a dollar shortage has restricted the import of vital medical equipment and led banks to curtail credit lines. Medical supplies, including gloves and masks, are scarce, compromising Lebanon’s ability to deal with the coronavirus pandemic.

In May, the Lebanese government began formal negotiations with the International Monetary Fund (IMF) to discuss a plan to rescue the economy and request around US$10 billion dollars in aid. However, the negotiations stalled when politicians failed to agree on the size of the country’s financial losses.

Anti-government protests, which began on October 17, 2019, against the political establishment’s corruption and incompetence, continued in 2020.

Tens of thousands of protesters gathered in downtown Beirut on August 8 to express their outrage over the Beirut blast and demand accountability. Security forces fired live ammunition, metal pellets, and kinetic impact projectiles such as rubber balls, including at health workers, and police deployed excessive quantities of tear gas, including at first aid stations. Several teargas cartridges were fired directly at protesters, striking some in the head and neck. Security forces also threw stones at protesters and beat them: 728 people were injured.

Attacks on free speech escalated in the wake of the October 17, 2019, nationwide protests, and authorities continued to use Lebanon’s criminal defamation laws to detain and charge individuals for speech critical of government officials, especially in relation to corruption allegations. Fourteen local and international organizations, including Human Rights Watch, announced on July 13 the formation of a “Coalition to Defend Freedom of Expression” to oppose the Lebanese authorities’ attempts to stifle free speech in the country.

Despite the passage of a solid waste management law in 2018 banning the open burning of waste, municipalities still engage in the practice, posing health risks to nearby residents, especially children and older persons.

The two major landfills servicing Beirut are set to reach capacity this year, but the government has not put in place a plan to tackle the looming trash crisis.

Since the 2015 trash crisis, during which garbage built up on the streets of Beirut, the government has been relying on stopgap measures and temporary fixes that do not solve Lebanon’s underlying waste management problems, incurring huge environmental and public health costs.

Lebanon has no minimum age for marriage, and some religious courts allow girls younger than 15 to marry. In 2017, Lebanon’s parliament repealed article 522, which had allowed rapists to escape prosecution by marrying the victim, but left a loophole regarding offenses relating to sex with children aged 15-17 and sex with virgin girls with promises of marriage. Marital rape is still not criminalized.

Women’s rights groups reported a significant increase in the number of calls about domestic violence during Covid-19 lockdown restrictions compared to the previous year.

LGBT people participated prominently in the nationwide protests that began on October 17, 2019. By taking their struggle to the streets, through chants, graffiti, and public discussions, LGBT people have moved demands of their rights from the margins to mainstream discourse.

However, article 534 of the penal code punishes “any sexual intercourse contrary to the order of nature” with up to one year in prison. Transgender women in Lebanon face systemic violence and discrimination in accessing basic services, including employment, health care, and housing. The economic crisis, compounded by Covid-19 lockdown measures, disproportionately affected LGBT people.

More than half of school-age refugee children are out of school.

The Covid-19 pandemic and the transition to remote learning has exacerbated inequalities and increased the risk that some children, particularly the most vulnerable, will not come back once schools reopen. The government’s distance learning strategy was not implemented consistently in “second shift” classes, attended by Syrian children, leaving the majority “completely out of learning,” a group of international humanitarian organizations reported in June.

An estimated 250,000 migrant domestic workers, primarily from Ethiopia, the Philippines, Bangladesh, and Sri Lanka, are excluded from Lebanon’s labor law protections, and their status in the country is regulated by the restrictive kafala (sponsorship) system, which ties migrant workers’ legal residency to their employer.

Human Rights Watch and many other organizations have documented for years how the kafala system gives employers excessive control over workers’ lives, leading to an array of abuses, including non-payment of wages, forced confinement, excessive working hours, and verbal, physical, and sexual abuse. During the economic crisis, many employers abandoned their workers, without pay or return flight tickets home, in front of consulates and embassies, and workers reported facing discrimination in receiving aid after the Beirut blast.

On September 4,  the Labor Ministry adopted a new standard unified contract for migrant domestic workers that allows workers to terminate their contract without the consent of their employer, and provides key labor guarantees already afforded to other workers such as a 48-hour work week, a weekly rest day, overtime pay, sick pay, annual leave, and the national minimum wage, with some permissible deductions for housing and food. If implemented, the contract could improve the lives of migrant domestic workers in Lebanon. However, the contract does not include provisions to allow workers to join and form unions, and the authorities have yet to roll out oversight and enforcement mechanisms or extend labor law protections to domestic workers.

Nearly one million Syrian refugees are registered with the United Nations High Commissioner for Refugees (UNHCR) in Lebanon. Lebanon’s residency policy for refugees makes it difficult for Syrians to maintain legal status, heightening risks of exploitation and abuse and restricting refugees’ access to work, education, and healthcare. Seventy-eight percent of Syrians in Lebanon now lack legal residency and risk detention and deportation for unlawful presence in the country.

At least 21 Lebanese municipalities introduced discriminatory restrictions on Syrian refugees that do not apply to Lebanese residents as part of their efforts to combat Covid-19.

An estimated 17,000 Lebanese were kidnapped or “disappeared” during the 1975-1990 civil war. On November 12, 2018, parliament passed a landmark law creating an independent national commission to investigate the fate of the disappeared, and in June, the cabinet approved the members of the commission.

In August, judges at the Special Tribunal for Lebanon convicted a member of Hezbollah for his role in the killing of former Lebanese Prime Minister Rafik Hariri in a 2005 car bomb. The court acquitted the three other defendants in the case.

Tensions between Hezbollah and Israel remain high. The Israeli military said it thwarted a Hezbollah raid at the border on July 27, but Hezbollah denied carrying out an operation. Israel violated Lebanese airspace frequently.

Lebanon and Israel began talks over their disputed maritime border on October 14.

Thirty-six countries pledged €253 million (around $300 million) for emergency support to Lebanon after the explosion during a donor conference co-led by France and the United Nations on August 9.  A second conference was planned for November. French President Emmanuel Macron is pushing Lebanese leaders to implement reforms.