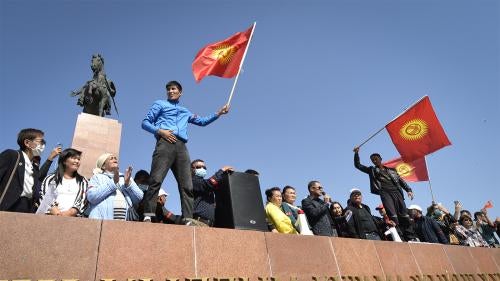 The death in custody of the wrongfully imprisoned human rights defender Azimjon Askarov in July was one of the low points of Kyrgyzstan’s rights record during the year. Kyrgyzstan held parliamentary elections in October, which international observers found to be competitive but tainted by claims of vote buying. Protests and political turmoil followed the announcement of the results, leading to President Sooronbai Jeenbekov stepping down. Authorities misused lockdown measures imposed in response to Covid-19 to obstruct the work of journalists and lawyers. Measures put in place to protect women and girls have yet to end impunity for domestic violence, which is still the norm. Parliament advanced several problematic draft laws including an overly broad law penalizing manipulation of information. Thousands of children with disabilities live in institutions and have limited access to inclusive education. 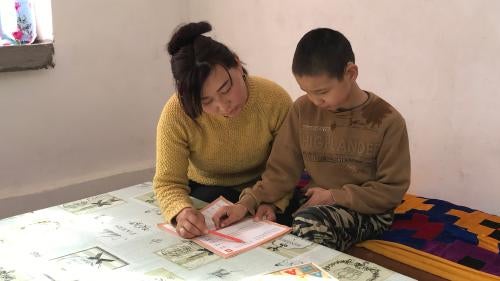 The election monitoring mission of the Organization for Security and Co-operation in Europe’s Office for Democratic Institutions and Human Rights (OSCE ODIHR) found that “fundamental rights and freedoms were overall respected” during October’s parliamentary elections but that credible allegations of vote buying remain a serious concern.” Opposition protests followed the outcome of the election. Kyrgyzstan’s Central Election Committee on October 6 annulled the vote. New parliamentary elections will be held sometime in 2021.

On July 25, the human rights defender Azimjon Askarov died in custody, a violation of his right to life. Askarov had served 10 years of a life sentence imposed after an unfair trial on politically motivated charges. Kyrgyzstan blatantly ignored a 2016 United Nations Human Rights Committee (HRC) decision finding he was arbitrarily arrested, tortured, and which called for his release. His health, compromised from his long-term imprisonment, sharply deteriorated in the days before his death, but prison officials denied him adequate medical treatment.

At time of writing, authorities had yet to carry out an independent investigation into Askarov’s wrongful imprisonment, denial of adequate medical care, or death in custody. UN Special Rapporteur on the Situation of Human Rights Defenders Mary Lawlor called Askarov’s death “a stain on the human rights record of the Government of Kyrgyzstan.” The European Union, which had called for Askarov’s release, pressed the government of Kyrgyzstan to clarify the circumstances of Askarov’s death.

Parliament advanced a widely-criticized bill on nongovernmental organizations (NGOs) that would impose additional burdensome financial reporting requirements on civil society groups. At a public hearing in May, representatives from the United Nations office and European Union delegation in Kyrgyzstan spoke out against adopting the bill.

Police on March 8 rounded up about 70 activists who had participated in a peaceful International Women’s Day march in Bishkek. They were held without access to lawyers and were not informed of the grounds for their detention. A handful of activists later contested the legality of their detention. In June a Bishkek court ruled against them, but Kyrgyzstan’s Supreme Court in November overturned the court decision finding police actions lawful.

The State Committee on National Security (GKNB) on May 29 brought dubious forgery charges against the rights defender, Kamil Ruziev. Ruziev had filed a lawsuit against the GKNB and the prosecutor’s office for failing to investigate how officials had threatened him, including at gunpoint. Ruziev’s case was sent to court in September and is ongoing.

Parliament adopted amendments to the Criminal Procedural Code removing a provision that obligates Kyrgyz courts to reconsider criminal cases in which an international human rights body, such as the HRC, has found a violation. The bill was sent to the president for signature after it passed a third reading in late June, but he returned the bill in early August for additional amendments.

June 10 marked 10 years since the outbreak of ethnic violence in southern Kyrgyzstan, in which 400 people were killed and nearly 2,000 homes destroyed. Authorities have failed to ensure accountability for crimes committed during the violence, or justice for the people arbitrarily arrested and convicted in trials marred by widespread allegations of ill-treatment and torture in the aftermath.

On June 25, parliament adopted a vague and overly broad law on “manipulating information” that allows authorities, without judicial oversight, to order the removal of information officials consider “false” or “inaccurate” from internet platforms. The president returned the bill to parliament in July, where it was pending further review at time of writing.

A court in mid-December approved freezing the media outlets’ bank accounts but reversed its decision a day later following public outcry. In mid-December, Organization for Security and Co-operation in Europe (OSCE) Representative on Freedom of the Media Harlem Désir said he was “highly concerned” about the defamation lawsuits, which are still pending court review.

On January 9, unknown assailants attacked the editor-in-chief of FactCheck.kg Bolot Temirov outside his office. Police opened an investigation and arrested four suspects, but the trial was delayed due to the pandemic.

Authorities in May dropped charges of interregional incitement against Aftandil Zhorobekov, a blogger who had written about corruption on social media. In February, authorities brought incitement charges against another blogger Elmirbek Sydymanov for speaking disparagingly about people from southern Kyrgyzstan.

Parliament in early November advanced in its second reading a restrictive trade union law after consideration of the bill had stalled for just over one year. The bill would grant the Federation of Trade Unions a monopoly over all federal-level union activity and require industrial and regional trade unions to affiliate with the federation. The bill undermines trade union pluralism and the right of trade unions to freely determine their structures and statutes. The International Labour Organization (ILO) and IndustriALL Global Union have criticized the proposed law, saying it would unjustifiably restrict freedom of association and the right to organize.

In the two years since Kyrgyzstan decriminalized possession of material the authorities label “extremist,” dozens of persons have had their convictions overturned. Local human rights lawyers said that some judges ordered a prisoner’s release upon review, but in other cases they rejected petitions and the detainees remained in prison. New cases suggest that authorities persist in targeting individuals under Kyrgyzstan’s vague definition of extremism, which captures nonviolent behavior such as “affronts to national dignity” as well as acts that may not rise to the severity of a security threat such as “hooliganism” and “vandalism,’’ and for the dissemination of extremist materials.

The government’s plans to repatriatee some of the hundreds of children of Islamic State (ISIS) suspects from Kyrgyzstan detained in Iraq stalled in 2020.

Despite legislation, including amendments to the Criminal Procedural Code adopted in 2020, which provides better protections for victims of domestic violence, authorities do not fully enforce protective measures or hold perpetrators accountable. Impunity for domestic violence is still the norm. At a June meeting of the National Council for Women and Gender Development, a government advisory body, Vice Prime Minister Aida Ismailova noted a 65 percent rise in reported cases of domestic violence cases in the first quarter of 2020.

In June, after a video emerged on Kyrgyz social media showing a man forcing his wife to stand weighed down by tires while he slapped and doused her with water, police detained and charged him with “cruel treatment,” though only after public outcry. A court convicted him, but only sentenced him to two years’ probation instead of jail time.

Impunity for torture and ill-treatment remains the norm. As a part of Covid-19 related restrictions imposed in March, authorities denied lawyers and monitors from the National Center for the Prevention of Torture access to prisons and other places of detention. According to government statistics sent to the anti-torture group Voice of Freedom, 68 allegations of torture were registered in the first five months of 2020.

The Health Ministry in August proposed a draft decree establishing rules for conducting medical examinations in cases of violence, torture, and ill-treatment. The decree was pending adoption at time of writing.

Kyrgyz authorities on August 22 extradited the journalist Bobomurod Abdullaev from Kyrgyzstan to Uzbekistan despite the risk of torture he faced there. Abdullaev alleged he had been ill-treated by GKNB officials.

Kyrgyzstan declared a state of emergency in March in response to the Covid-19 pandemic. While restrictions were in place, neither independent media outlets nor lawyers were granted permits to pass police checkpoints, interfering with their ability to work. Peaceful assemblies were banned in several cities in Kyrgyzstan. Authorities threatened criminal sanctions or opened investigations for spreading “false information” about the virus against doctors and others who voiced concerned about inadequate protective equipment. According to data published in mid-July, medical workers made up approximately 16 percent of the total number of infections in Kyrgyzstan.

During the Covid-19 related lockdown, the government did not classify domestic violence services as “essential” to ensure services remained operational, and shelters, crisis centers, and other services were closed to newcomers. Around 2.4 million children and young people are affected by educational facility closures, and had to continue education by remote learning where possible. In August, the World Bank cautioned that the Covid-19 pandemic could have a detrimental and long-lasting impact on education and human capital, and economic and social development in Kyrgyzstan.

In December 2019, UN Special Rapporteur on Minority Issues Fernand de Varennes visited Kyrgyzstan and found that ethnic relations “remain fragile” and that factors including “underrepresentation of minorities” and “unfair treatment by law enforcement” could “bring the level of inter-ethnic tension to a breaking point.”

The European Union and Kyrgyzstan had not signed their Enhanced Partnership and Cooperation Agreement by year’s end, although negotiations had formally concluded in 2019. At the EU-Kyrgyzstan human rights dialogue in September, the EU raised Askarov’s case and noted concern over controversial draft laws, restrictions on peaceful assembly and information, and the high increase in cases of domestic and gender-based violence during the pandemic.